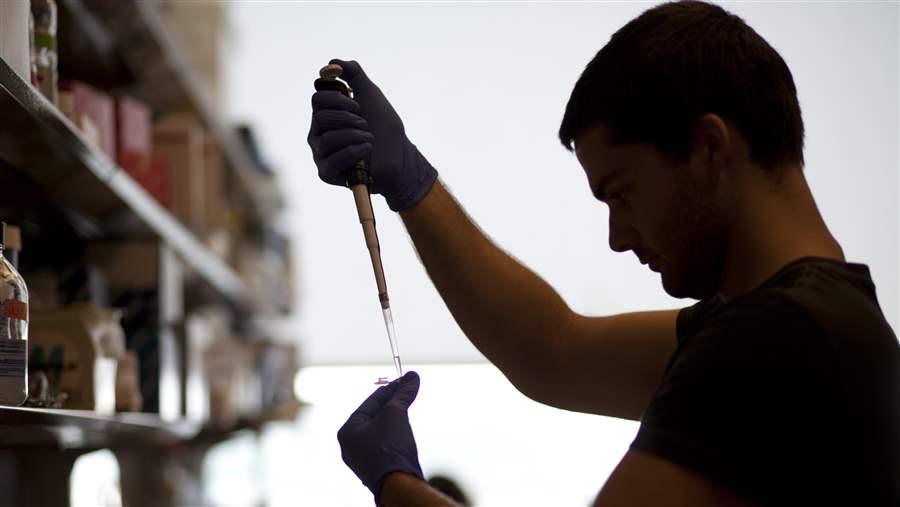 Five alumni of the Pew Latin American Fellows Program in the Biomedical Sciences have been named lifetime academicians of the Academia de Ciencias de América Latina (ACAL)—one of the highest distinctions in Latin American science—for their outstanding contributions to biomedical science and their commitment to fostering scientific collaboration across continents.

The ACAL works to strengthen ties among researchers throughout Latin America and the Caribbean, and to promote a culture of curiosity and scientific diligence among its members. Much like The Pew Charitable Trusts’ annual meeting for its biomedical scholars and fellows, the ACAL each year hosts a gathering where investigators discuss and exchange ideas. Both organizations work to foster a robust scientific community at home and beyond. Scientists tied to these communities are building a legacy of big ideas, translated into projects that inform—and will continue to benefit—the future of human health.

Meet the five Pew Latin American fellows in this year’s class of academicians:

Ana Belén Elgoyhen, Ph.D. (Argentina; Pew fellow, class of 1991) was nominated for her research on the physiology of hearing. She discovered a mechanism that regulates auditory stimuli, which could provide important insights into human auditory diseases such as tinnitus. Professor Elgoyhen is vice director of the Instituto de Investigaciones de Ingeniería Genética y Biología Molecular in Buenos Aires.

Sidarta Ribeiro, Ph.D. (Brazil; Pew fellow, class of 2001) focuses on memory research, using new technologies to investigate the importance of brain function in propagating memories during sleep and how it translates to dreams. Professor Ribeiro founded the Instituto do Cérebro at the Universidade Federal do Rio Grande do Norte, located in the city of Natal in northeastern Brazil, which attracts neuroscientists from all over the world. The Instituto’s advisory board is headed by Dr. Torsten Wiesel, chair of the Pew Latin American Fellows Program. Dr. Ribeiro has also acted both as a member and as chair of the regional nominating committee for the Pew fellows program in Brazil.

Patricia León Mejía, Ph.D. (Mexico; Pew fellow, class of 1992) was honored for discovering a novel signaling pathway for sensing glucose levels in the plant Arabidopsis. Her work illuminates the ways that plant nuclei and chloroplasts communicate. Professor León works in Cuernavaca, Mexico, at the Instituto de Biotecnología at the Universidad Nacional Autónoma de México, where she is chief of the Plant Molecular Biology Department.

Alexander De Luna, Ph.D. (Mexico; Pew fellow, class of 2005) is an important contributor to the field of systems biology, working with yeasts to identify new genetic modules in evolution and aging. Professor De Luna works at the Laboratorio Nacional de Genómica para la Biodiversidad (LANGEBIO) and continues to support the Pew fellows program as chair of its regional nominating committee in Mexico.

Jorge Huete-Pérez, Ph.D. (Nicaragua; Pew fellow, class of 1996) has led extensiveefforts to preserve Nicaragua’s oceans. His research explores the genetic makeup of the people of Nicaragua. Professor Huete-Pérez works at the Universidad Centroamericana in Managua, where he founded the Center for Molecular Biology—the first of its kind in Central America.

The 2016 class of Pew Latin American fellows will be announced in June.