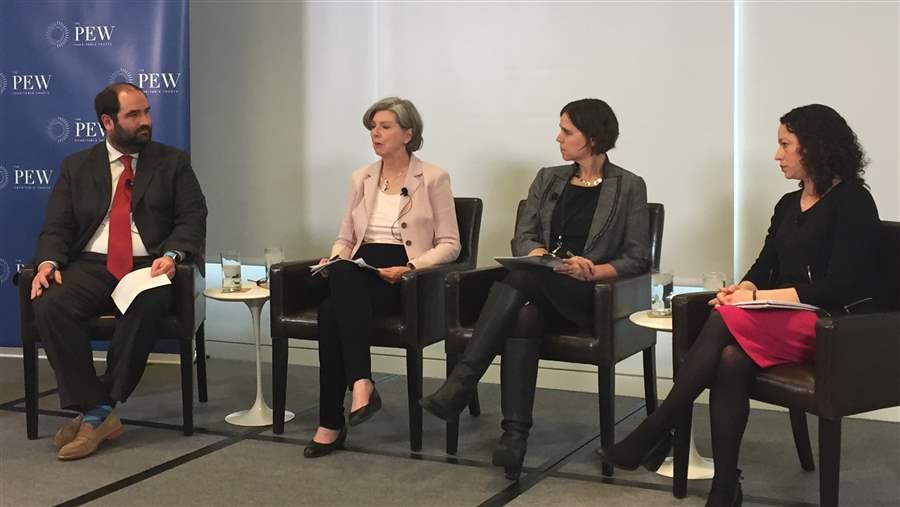 “Millions of people are struggling in this country to make ends meet,” Leigh Phillips, CEO of the microsavings nonprofit EARN, said at an April 13 panel discussion hosted at The Pew Charitable Trusts in Washington on factors that keep Americans from saving and policies, products, and programs that can help break down those barriers. Jeanne Hogarth, vice president for policy at the Center for Financial Services Innovation (CFSI), and Tara Watson, deputy assistant secretary at the Office of Economic Policy of the U.S. Treasury Department, rounded out the panel, which was moderated by Clinton Key, research officer for Pew’s financial security and mobility project.

American households face significant savings challenges.  According to a recent Pew survey, 55 percent of U.S. households spend everything—or more than—they make most months, and many have little or no savings to deal with financial shocks, such as car repairs or unexpected losses of income. For example, the data showed that 40 percent of households couldn’t cover a $2,000 emergency expense with liquid savings. And these events are more common than people might think: Over the course of a year, 6 in 10 families experience financial shocks.

Fortunately, these issues are beginning to be acknowledged and addressed by a range of programs and policies, and the Pew event highlighted some of the promising steps that individuals and institutions can take to help promote financial health.

Many American households regularly contend with fluctuating income and expenses that can make it difficult to predict their financial situation, even over the short term, and exacerbate their already precarious situations.

“We have a financial system that is based on an assumption of consistency that isn’t real,” Phillips said, noting that many people aren’t paid on a regular schedule and that bills aren’t always due on the same day of each month. “People faced with volatile income and lack of savings can get into a cycle that’s hard to get out of,” Watson said.

We have a financial system that is based on an assumption of consistency that isn't real.Leigh Phillips, CEO of EARN

Many Americans lack access to critical financial tools, such as direct deposit, which can keep people on the right financial track by making money immediately available to pay bills or purchase items, unlike checks, which can take days to clear. An EARN survey found that 70 percent of wage workers in San Francisco did not use direct deposit, and 20 percent of the city’s businesses don’t offer direct deposit for these employees. Phillips suggested that similar situations around the country are contributing to a growing disconnect between many families and the institutions—i.e., banks—that can help them save and build wealth.

Financial technology, also known as FinTech, focuses on offering more efficient financial services, such as personalized mobile apps that flag realistic saving measures or help consumers pay their bills on time. “FinTech is an increasing presence in the market,” Hogarth said, “and it is really shifting the lens on these financial problems.”

She observed that the model of a steady economic household rocked by a financial crisis is just that—a model—and that more often, the reality for many households is inconsistent flows of income and expenses, which make them particularly susceptible to financial shocks. She referenced the CSFI’s Financial Solutions Lab—a five-year program to identify innovative technology solutions to help Americans save—which is trying to help people master that financial unpredictability, as well as the shocks, using myriad approaches, such as managing volatile income, building emergency savings, and finding sources of public and private support.

The Treasury Department is also tapping into technology with the launch of the myRA program, an online service that allows people who do not have access to employer-provided savings programs to start building a cushion for retirement, Watson explained.

Having a [regulatory] sandbox for financial institutions and other stakeholders to play in is really critical.Jeanne Hogarth, vice president for policy at the Center for Financial Services Innovation

Starting off small with simple concepts can help families begin to save. Phillips recommended targeting $500 at first. For example, EARN recently launched an online savings program to help promote financial health for low-income families. Participants committed to saving $20 a month over six months and got a $10 monthly reward. The pilot showed that families can save consistently, and many households are still saving 12 months after the program ended, she noted.

Hogarth encouraged more experimentation of this kind so that businesses can learn from failures and successes. “Having a sandbox for financial institutions and other stakeholders to play in is really critical,” she said.

The panelists agreed that although it is never too late to start saving, sooner is better. A first job, for example, presents a prime opportunity to build good habits. Phillips said that as soon as they get their first paychecks, young people should adopt direct deposit, open savings accounts, and begin to put a certain amount away. One program helping young workers do that is Summer Jobs Connect, which educates participants on the benefits of savings-oriented banking services and provides access to accounts. Last summer, the account access provided by the program helped 1,000 kids collectively save $300,000 in eight weeks. People need to begin their working lives within the financial mainstream, Phillips stressed.

The panel agreed that although these efforts are promising, much more is needed to address the widespread financial insecurity among American households. An array of interventions—policies, programs, and products—may be necessary. Pew’s Clinton Key ended the discussion by noting that experts need a better grasp of “how money flows through people’s lives and how financial security at one point in time can differ from other times. Let’s talk about this, and let’s get this done.”

Watch the panel discussion on American financial stability and savings:

Americans overwhelmingly prioritize financial stability over economic mobility. However, recent Pew research suggests that such security is elusive: Even the most well-off households find their finances strained when they experience a financial shock&mdash;expenses or lost income they do not anticipate, such as a major car or home repair or a loss of income.

Pew’s financial security and mobility project hosts events to keep the media, policymakers, and practitioners up to date on the latest research and data related to family finances.

Pew&rsquo;s financial security and mobility project hosts events to keep the media, policymakers, and practitioners up to date on the latest research and data related to family finances. See below for information and resources on upcoming and past events.