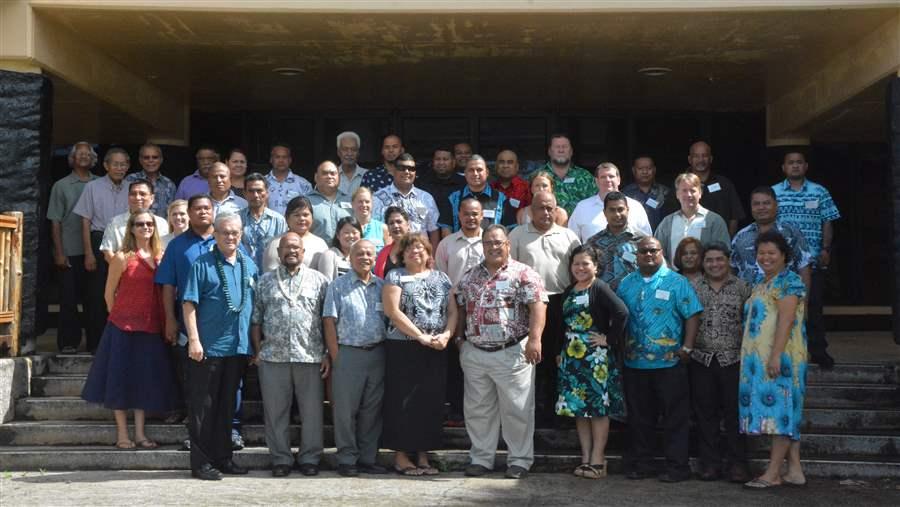 On April 6 and 7, government officials from across Micronesia gathered for a workshop in Palikir, Federated States of Micronesia, to explore how to ensure the enforcement of the Micronesia Regional Shark Sanctuary, as well as to discuss larger fisheries management challenges, including illegal, unreported, and unregulated vessels.

Representatives from the Pacific island jurisdictions of Palau; the Marshall Islands; the Federated States of Micronesia (FSM) and its four states of Chuuk, Kosrae, Pohnpei, and Yap; the Commonwealth of the Northern Mariana Islands; and the U.S. territory of Guam attended the workshop, which was hosted by the FSM government on Pohnpei. The Micronesia Conservation Trust and The Pew Charitable Trusts provided support for the meeting.

The Micronesia Regional Shark Sanctuary spans 6.5 million square kilometers (2.5 million square miles) and was completed in 2015. It prohibits commercial fishing for sharks; retention of sharks caught as bycatch; and the trade, possession, and sale of shark products.

“It is critical we take the words in the shark protection measures and put them into action on a regional level if we wish to protect these species,” FSM Vice President Yosiwo George stated in his opening remarks. “This workshop is a momentous step towards doing just that and illustrates the Pacific’s understanding of the importance of this regional sanctuary to its marine ecosystem and the lives of those relying on these resources.”

The workshop included discussions on maximizing the effectiveness of monitoring, control, and surveillance (MCS) efforts across the sanctuary, as well as presentations from government officials and experts in the field. Peter Graham, representing the Pacific Islands Forum Fisheries Agency, provided information on the multiple tools available to enhance communication and collaboration among Micronesia’s governments to enforce shark protections and other fisheries management measures. These tools will assist jurisdictions in working together to make regional enforcement of the sanctuary—which is essential to ensuring meaningful protections for these species—a reality.

In the closing of his keynote address, Tony de Brum, ambassador of climate change for the Marshall Islands, said, “If the jurisdictions of the Micronesia Regional Shark Sanctuary are able to harmonize their enforcement efforts and make these shark protections a reality, it will go down in history as a major achievement not just for the Pacific region, but on a global scale.”

The regional meeting builds on a series of enforcement workshops that started in 2012 and were held across the region to train local officials on best practices for implementing the shark sanctuary laws. These workshops laid the groundwork for the recent regional meeting, as each jurisdiction now has an understanding of the successes and challenges to enforcing its respective sanctuaries.

“The Micronesia Regional Shark Sanctuary is the first in the world and is a significant accomplishment in and of itself, but it also acts as a framework for each jurisdiction to enforce its regulations moving forward,” said Willy Kostka, executive director of the Micronesia Conservation Trust, which was instrumental in the development of the FSM shark sanctuary.

At least 100 million sharks are killed each year in commercial fisheries due to the unsustainable demand for their fins, and nearly 30 percent of all shark species assessed by scientists are threatened with extinction.

Given the ecological, economical, and cultural importance of sharks to the Pacific, the ability of these governments to work together to develop solutions to enforce the shark sanctuary on a regional scale is a significant step toward ensuring the survival of these species.