The Consumer Financial Protection Bureau (CFPB) is preparing the first federal regulations for payday and similar loans. This is propelling a shift in the market away from the conventional payday loan model, which has led to serious harm because the loans must be paid off after two weeks in a single payment that consumes about one-third of the typical borrower’s next paycheck. Instead, small-loan lenders are increasingly using installment loan models in which borrowers settle over a period of months. Although longer-term loans generally work better for borrowers, they can be harmful without additional regulatory protections. Whether borrowers would fare better under these new types of longer-term loans would depend on the strength and clarity of the CFPB’s pending rules.

The market will continue to shift toward installment lending

Today, payday and auto title lenders operate in 39 states; in 25 of them, lenders already issue installment loans or lines of credit that would pass the CFPB’s proposed ability-to-repay rules even though many have annual percentage rates exceeding 300 percent and include unaffordable loan terms. These loans lack the safeguards that well-structured installment loans should have, including affordable loan payments and limits on cost and duration.

The CFPB’s rules would not prevent the spread of all potentially harmful loans because the bureau lacks the power to regulate interest rates. In fact, the agency’s March 2015 outline of its proposed payday loan rules provided a clear pathway for lenders to continue making high-cost loans where allowed by state law. Further, high-cost payday and auto title installment lending is likely to expand beyond the 25 states where it exists today as lenders continue to push the limits of state laws or seek to amend state laws in their favor. However, this probability raises important questions: What will these longer-term loans look like, and how will the CFPB ensure the safety and fairness of these loans for the millions of people who will use them? The answers will depend on whether the CFPB stamps out common harmful practices; provides a strong regulatory framework on which state lawmakers can build; and sets clear, simple rules to encourage traditional financial institutions to provide new loans that are safer and less expensive.

In the best-case scenario, the CFPB would improve its regulatory approach in two ways. First, it would strengthen its proposed “ability-to-repay” underwriting requirements to prevent harmful practices, such as issuing borrowers loans that last too long or charging large origination fees that make reborrowing expensive and dangerous. Second, it would finalize clear and sensible guidelines describing the “longer-term alternative” option, which features a streamlined underwriting process for lenders but also includes more stringent rules governing the safety of the loans. Clear guidelines for payment size, duration, and other loan terms would improve the overall transparency and safety of loans while reducing origination and regulatory compliance costs for lenders. This could enable lenders—especially banks and credit unions—to enter the market with new small installment loan products that cost less and work better for borrowers.

Clear rules would also give state lawmakers a tangible framework on which to build. The CFPB lacks authority to regulate pricing or dictate loan terms and will give lenders options for how to comply with federal rules. Yet state lawmakers do have the power to regulate pricing and require lenders to follow exacting standards. The CFPB could help by including an option in its federal rule that clearly defines a safe loan and provides a model for state legislation.

The bureau’s March 2015 regulatory proposal included such an option, based in part on Colorado’s successful 2010 payday loan reform, which would require loans to have affordable payments of no more than 5 percent of the borrower’s paycheck and reasonable durations of six months or less. That option was the strongest part of its initial proposal, and the CFPB should finalize it, or something very similar, in its final payday loan rules.

In the worst-case scenario, the CFPB would make none of these improvements. High-cost payday and auto title installment loans would continue to spread without essential protections to guard against excessive durations and unaffordable payments, and better loan options would not emerge. State lawmakers would have no model to standardize around, and lower-cost providers such as banks and credit unions would be discouraged from entering the market due to regulatory costs and uncertainties. Millions of Americans could continue to be harmed by unsafe loan products without having access to better alternatives.

The table below summarizes these scenarios. 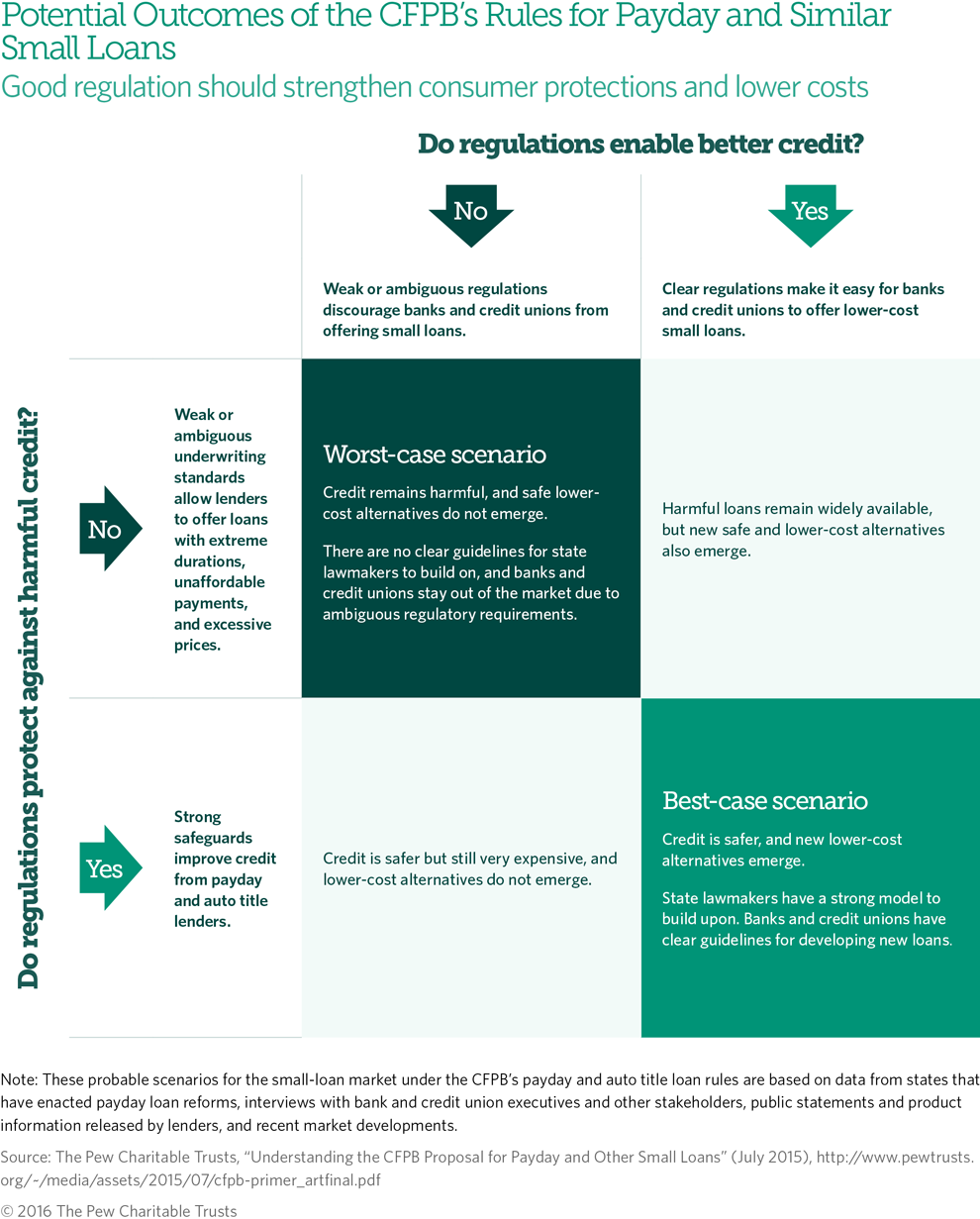 If the CFPB’s regulations were sufficiently clear and rigorous, they could directly stop many of the worst harms in these markets, help enable banks and credit unions to introduce new types of lower-cost small loans, and give state legislators a standard model on which to improve consumer protections in their states.

Next: How CFPB Rules Can Encourage Banks and Credit Unions to Offer Lower-Cost Small Loans