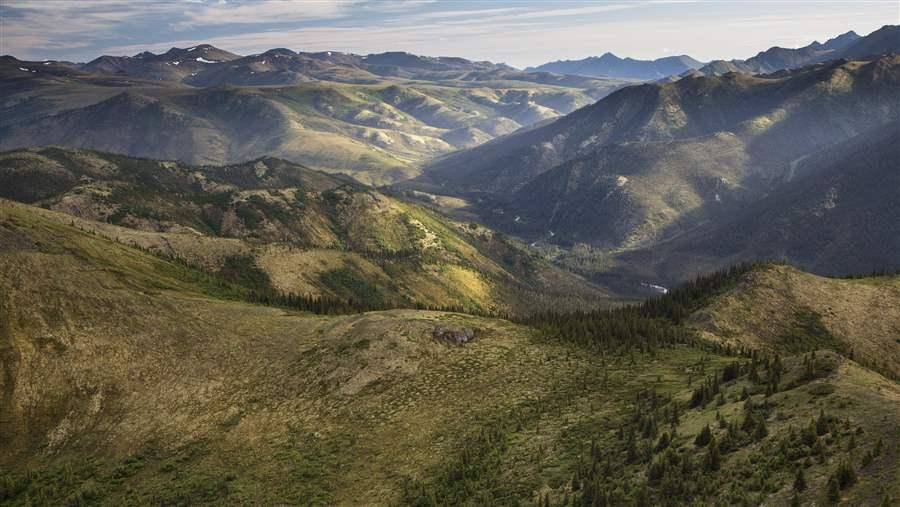 The one-million-acre White Mountains National Recreation Area was designated by Congress in 1980.

Alaska’s wild and secluded eastern Interior is a place of spectacular landscapes, vast river networks, and pristine ecosystems spanning nearly 7 million acres of some of the most remote U.S. lands. These public areas east of Fairbanks are managed by the Bureau of Land Management (BLM) and made up of four subunits—the Steese, White Mountains, Upper Black River, and Fortymile.

Moose, caribou, grizzly bears, wolverines, and eagles are among the many species that make their home there. Some of this land also provides outstanding opportunities for a variety of recreational pursuits, including hunting, fishing, rafting, and cross-country skiing to winter huts.

The eastern Interior region has sustained human communities for thousands of years. People throughout the area depend on the health of large caribou herds, Dall sheep, moose, migratory birds, fish, and water resources. The fish and wildlife in the region not only provide most of the food consumed there, but these resources are also essential to the culture of Alaska’s Gwich’in people.

The Steese area, which offers hiking trails, birding, camping, and sport and subsistence hunting opportunities, is the only place in the state protected as a national conservation area. Its high-quality wildlife habitat provides crucial forage for the Fortymile caribou herd, one of the most important subsistence herds in the region. The Birch Creek National Wild and Scenic River, designated to preserve its natural state, runs through the Steese.

The White Mountains are the sole national recreation area in the nation managed by the BLM. Accessible by road from Fairbanks, the area is a year-round recreation destination for a combination of motorized and nonmotorized users, such as skiers, snow machiners (snowmobilers), dog teams, anglers, hikers, and campers. Visitors come to the White Mountains to float the Beaver Creek National Wild and Scenic River, which at 400 miles is the longest road-to-road float trip in the United States. It is a tributary of the mighty Yukon, Alaska’s longest river.

Another tributary of the Yukon, the Fortymile, is a wild and scenic river internationally recognized for its remoteness. The Fortymile is popular for its recreational gold panning and also hosts commercial mining operations. This area includes critical summer calving habitat for the Fortymile caribou herd, with more than 40,000 animals.

The Upper Black River is significant for Alaska’s Gwich’in people and their customs, and traditional uses of the land. The Black River, known locally as the Draanjik, serves as a transportation corridor, drinking water source, and vital fish habitat for salmon, arctic char, and grayling. This BLM-managed land in the Upper Black River region is some of the most pristine in the state, and its habitat supports critical subsistence resources for Interior Alaskan villages.

In February 2012, the BLM released a draft proposal for managing these 7 million acres of land over the next 20 to 30 years. The draft acknowledged important areas for conservation but allowed those conservation areas to be opened to new mining and development.

Since issuing the draft plan, the agency has reached out to local stakeholders, including some federally recognized tribes, to hear views on and concerns about the proposal.

A final Eastern Interior Resource Management Plan is expected to be released in May. In comments to the agency during the planning process, The Pew Charitable Trusts strongly urged the BLM to retain protections in the eastern Interior’s four subunits to provide administrative protections by prohibiting development on lands with wilderness characteristics and other special areas, including areas of critical environmental concern and riparian conservation areas.

We are hopeful the agency will take the opportunity to provide substantial administrative protections for these public lands and to better balance any development with the conservation of lands with outstanding characteristics.