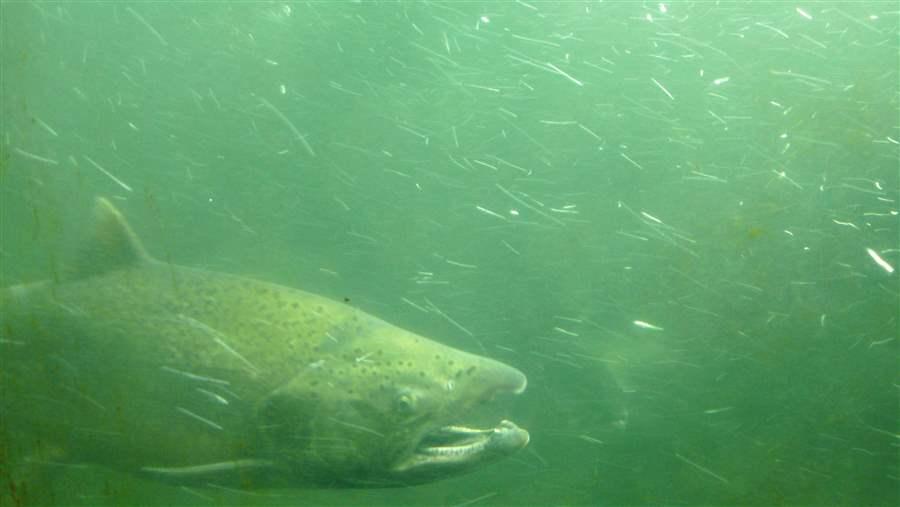 The health of salmon populations in the Pacific Northwest depends on the condition of the surrounding environment, both in the ocean where the fish spend most of their adult lives and in the rivers where they spawn. They are a prime example of the need for an ecosystem-based approach to managing fishing in U.S. oceans.

This has been a wet winter in the Pacific Northwest, soggier even than our rain-soaked reputation. As a lifelong angler, I see a silver lining in those gray skies: plenty of water in the rivers for spring chinook salmon returning from the Pacific Ocean to spawn.

Like thousands of other West Coast fishermen, I’m already looking forward to putting a couple of these mighty and delicious fish on my smoker.

While I wait for that opportunity, I’ll reflect on the remarkable life cycle of this iconic Northwest species that is both a model of tenacity and a bellwether of the health of the rivers where it spawns and the ocean where it spends most of its life.

After they emerge from gravel river bottoms as tiny fry, some species of wild salmon will migrate hundreds of miles to reach the Pacific Ocean, where survivors spend the next three to four years evading predators and fishing hooks while feeding from the ocean’s bounty.

Then, an innate instinct prompts them to reverse their path and return to the streams of their birth to spawn the next generation. Along the way, they will fight upstream against predators and obstacles, in many cases crossing waterfalls and fish ladders at dams to reach the next stretch of swimmable water.

Wild salmon are a key indicator of the overall environmental health of the Pacific Northwest. Low salmon numbers suggest problems in their habitat, a lack of food, or some other imbalance in their surroundings.

That’s why U.S. fishery managers should shift to an ecosystem-based approach to managing fish instead of sticking to the old method of considering each fish species in isolation.

In the case of salmon, it’s tough to set reasonable catch limits without some understanding of the state of their freshwater spawning habitat, the relative abundance of prey in the ocean, and the shifts in sea surface temperatures that influence their survival.

Congress has a chance to lead the way toward a more comprehensive approach to fishery management when it reauthorizes the primary law that governs fishing in U.S. oceans, the Magnuson-Stevens Act. Salmon are the “poster fish” for this kind of approach because they are so closely attuned to environmental conditions.

Luckily for salmon—and other marine life—West Coast fishery managers have already started to recognize the fact that the fate of salmon depends on what’s happening in their surrounding environment. In 2013, the Pacific Fishery Management Council unanimously adopted its first Fishery Ecosystem Plan (FEP) as a way to begin tracking many of the factors that affect salmon and other commercially and recreationally fished species on the West Coast.

An FEP serves as a guide to help fishery managers look at the overall picture when they set catch levels for individual species such as salmon. On the West Coast, fishery managers are beginning to track critical indicators of ocean health, including sea surface temperatures, prey abundance, and population growth rates, which can be used by managers to detect and head off problems before they cause significant trouble for certain species.

Rather than trying to make decisions about each species in isolation, ecosystem-based fishery management encourages fishery managers to consider the factors that affect fish populations—where they live, what they eat, and who eats them—when setting fishing rules.

Next month marks the 40th anniversary of the Magnuson-Stevens Act. It’s time for a new focus in fisheries management. For more information, please visit www.pewtrusts.org/healthyoceans.