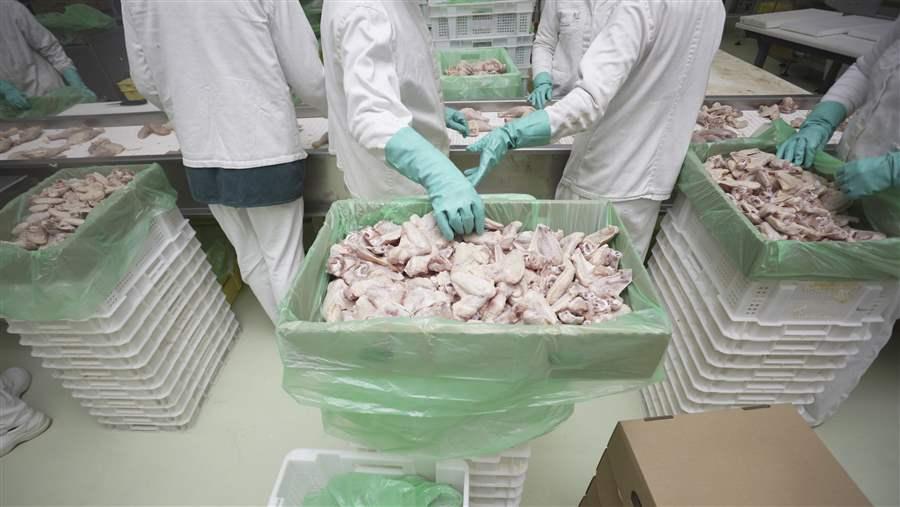 New USDA standards include chicken parts, the most popular poultry product in the U.S.

From 2013 to 2015, three major outbreaks of foodborne illness were linked to poultry products contaminated with Salmonella. The second—tied to Foster Farms, the sixth-largest chicken producer in the United States—called into question the approach taken by the Food Safety and Inspection Service (FSIS), the agency within the U.S. Department of Agriculture (USDA) that is responsible for overseeing the meat and poultry supply.

In a 2013 report, Pew identified key weaknesses in USDA’s Salmonella policy and outlined recommendations for strengthening it. On Feb. 4, the USDA announced new standards aimed at reducing Salmonella and Campylobacter in chicken parts—one of Pew’s main recommendations.

For the first time, FSIS has created limits for microbial contamination in chicken parts, the most common type of poultry product that Americans eat. FSIS has also adopted a sampling approach that sends inspectors into facilities regularly, ensuring that producers maintain a high bar for safety throughout the year. In addition, FSIS has committed to posting its sampling results online and re-evaluating its safety standards every five years.

These performance standards are aimed at limiting contamination, and are tied to specific public health outcomes, known as the Healthy People 2020 goals. FSIS has also pledged to periodically analyze the public health impact of these standards and incorporate new data to rapidly detect and control foodborne illness outbreaks.  In keeping with its 2013 analysis, Pew recommends that FSIS now go beyond the current approach to testing for the presence or absence of bacteria to an approach that considers the amount of bacteria on a particular product.

Each year, more than 1 million Americans are sickened by food contaminated with Salmonella. Approximately one-third of those illnesses are tied to FSIS-regulated products. With full implementation and enforcement, these new standards should bring those numbers down.

The U.S. Department of Agriculture&rsquo;s Food Safety and Inspection Service (FSIS) oversees the safety of meat and poultry products.