What’s Love Got to Do With Green Sea Turtles and Fish? 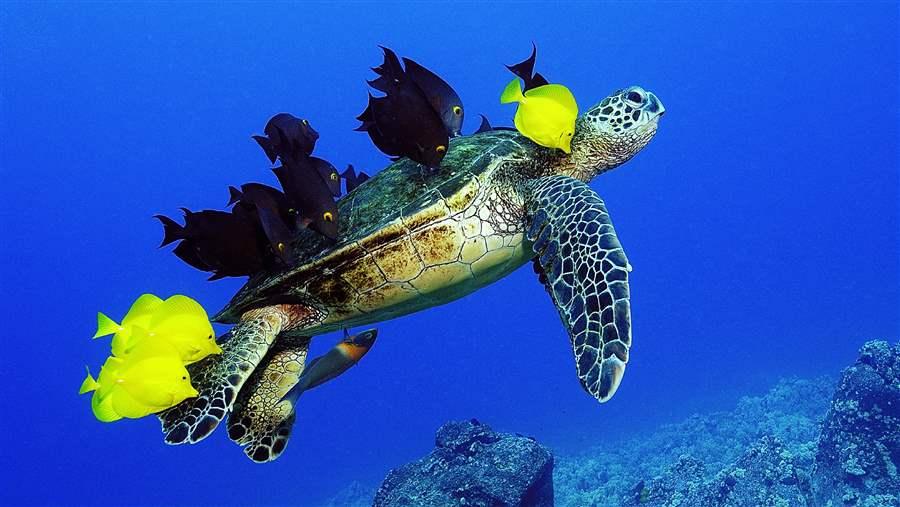 Yellow tangs and lined bristletooth fish—the small yellow and black fish shown cleaning the green sea turtle in this photo, taken off the coast of Hawaii—are two types of surgeonfish.

For an underwater match made in heaven, look no further than green turtles and surgeonfish. But it’s not love that keeps them together; it’s a relationship of convenience.

Surgeonfish mostly like to graze on algae. Those seeking an easy smorgasbord stake out some territory and set up cleaning stations where turtles, fish, and other animals know they can drop by to get their annoying algae and other pesky hitchhikers nibbled off.

Endangered green turtles are one of many customers at some cleaning stations, which surgeonfish typically set up near coral reefs. Generations of surgeonfish keep the stations going in the same place. The turtle approaches the seafloor, and the fish visually inspect it to see which algae patches are most appetizing. Then they gorge away, feeding with rapid bites that scrape the algae-covered flippers and shells clean. The fish get a nutritious meal; and with smoother shells, the turtles can swim more easily, saving energy on their long migratory journeys to the beaches where they were born.

This type of symbiotic relationship exists among many fish species and other sea life in different parts of the world. For example, surgeonfish can themselves get cleaned by tiny fish called wrasses.

Some surgeonfish can help save coral reefs, too

But surgeonfish service goes beyond just cleaning turtles and other animals. They also munch on the algae found on reefs, which otherwise smother the coral. Their special role in the ecosystem is one reason the Caribbean Fishery Management Council has set lower limits on their catch to prevent overfishing. Before 2012, no catch limits existed. In a region where corals are facing an onslaught of problems, ranging from pollution to warming and more acidic waters, the Caribbean bright blue tang and doctorfish are two types of surgeonfish that are helping corals survive.

Surgeonfish are found worldwide among coral reefs. (Dory, the fan favorite of “Finding Nemo,” is a surgeonfish.) The fish get their name from the erectable razor-sharp spines at the base of their tails. With a quick, slashing flip of the tail, these “scalpels” can fend off territorial interlopers or inflict a nasty wound on would-be predators. 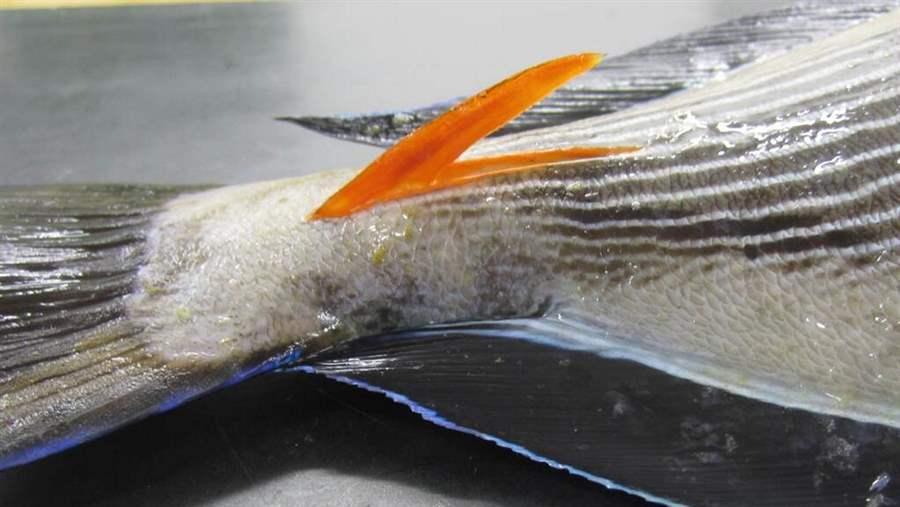 Surgeonfish are named for the erectable razor-sharp spines at the base of their tails (shown here). With a quick, slashing flip of the tail, these “scalpels” can fend off territorial interlopers or inflict a nasty wound on would-be predators.

But before a knife-wielding fish gives you a fright, remember that in addition to their critical role in maintaining healthy coral reef ecosystems, surgeonfish may also hold secrets for improving human health.

Surgeonfish have a unique stomach that houses diverse microbes, which assist in digesting tough and toxic marine algae. For example, brown surgeonfish from the Red Sea were found to harbor one of the largest forms of bacteria ever discovered. So studying surgeonfish gut symbioses could also lead to discoveries that help us better understand human digestive diseases.

Protecting fish because of their critical role in ecosystems is a forward-looking, proactive way to safeguard ocean resources. That type of approach, called ecosystem-based fishery management, requires smart planning based on science and research. Sustainable management, in turn, considers the unique function of any species when setting fishing rules.

This big-picture method is something Congress should emphasize when renewing the federal fish law, the Magnuson-Stevens Fishery Conservation and Management Act. As the law approaches its 40th anniversary, it’s time for an update and a new focus in fisheries management. For more information, visit pewtrusts.org/healthyoceans.

Downloads What’s Love Got to Do With Green Sea Turtles and Fish? (PDF)
AUTHORS