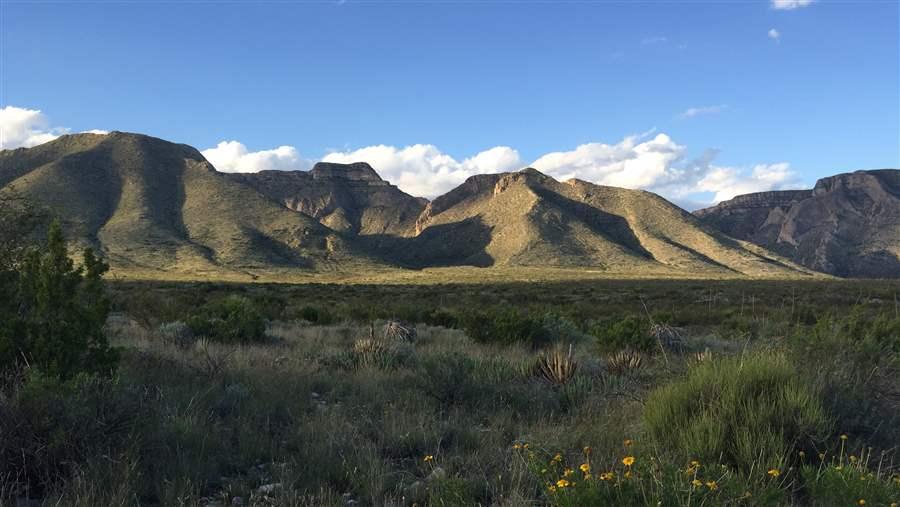 Note: The article below was updated to reflect that the Bureau of Land Management will soon ask for public input on the Carlsbad public lands.

In southeast New Mexico, the Carlsbad Caverns are a world-renowned tourist destination. Every year, hundreds of thousands of visitors enjoy the numerous underground caves that form one of the nation’s most prominent geological resources. Above ground, the mountains and valleys of this region in the Chihuahuan Desert are no less spectacular. The Guadalupe Escarpment, which was once an underwater reef within a vast inland sea, now hosts the easternmost forests of the Southwest, while the lower desert is filled with a diversity of plants and wildlife rivaling that of almost anywhere else in the West.

Centered around the city of Carlsbad, more than 2 million acres of public lands—predominantly managed by the Bureau of Land Management (BLM)—provide a plethora of outdoor recreation activities and opportunities to watch wildlife. More than 300 bird species are found along the desert rivers. Animals such as javelina and ring-tailed cats roam the hills and canyons of the surrounding area. The Carlsbad region is a delight for adventurers.

The BLM will soon ask for public input on how our Carlsbad public lands are managed—whether for conservation purposes or for development including oil and gas. The Carlsbad BLM manages more than 1.5 million acres of oil and gas producing wells—representing more than two-thirds of the public lands within this field office. The agency is revising its overarching plan, which will set conservation and management policies for the next 20 years or more. In this place where widespread oil and gas development meets the parallel obligation to protect wilderness and natural areas, how the BLM decides the fate of our public lands will have a major effect on the Carlsbad-area communities and on public land users as a whole.

While the vast majority of the BLM’s Carlsbad lands are leased for oil and gas drilling, numerous natural areas still exist, particularly near the Guadalupe National Forest and Carlsbad Caverns National Park. As part of the agency’s draft plan, almost 60,000 acres of land (about 3 percent of the planning area) have been identified as having “wilderness characteristics,” which means they are generally free of roads and provide outstanding opportunities for quiet recreation such as hiking, horseback riding, and camping. Lewis Peak, Serpentine Bends, and Felix Canyon are several of the special places that allow visitors to escape the sights and sounds of civilization. They deserve management that will protect their wilderness character.

The Pew Charitable Trusts has partnered with the New Mexico Wilderness Alliance and other organizations to call on the BLM to provide a healthy balance between development and conservation in this management plan. In 2014, we began a citizen’s inventory of wilderness lands that will help inform the BLM’s official identification of these lands. With that inventory completed, Pew looks forward to working with the agency and the local communities to develop a plan that ensures Carlsbad’s natural resources remain healthy and accessible for future generations.

Ken Rait is director of the U.S. public lands program at The Pew Charitable Trusts.