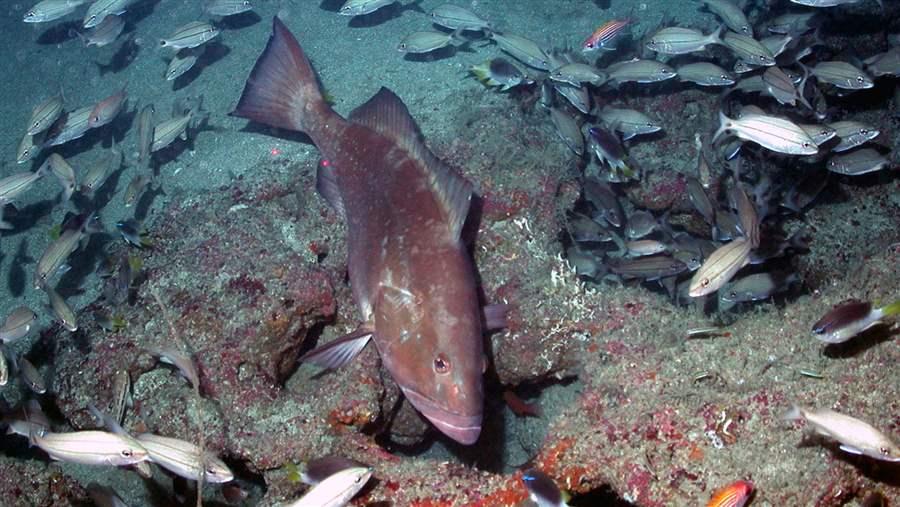 A red grouper patrols its hole, where many fish species, coral, algae, and invertebrates take up residence.

Zipping around preparing for holiday guests? Then find yourself picking up after some of the messy ones?

Just like human hosts, red grouper go to a lot of trouble to create the perfect setting for visitors. These “underwater architects” excavate holes in the seafloor that look like huge depressions, which they call home.

By carrying away mouthfuls of sediment, they expose rocks and ledges that are ideal places for guests to settle: sponges, corals, and anemones—creatures that attract lots of other sea life, including lobsters, grunts, porgies, and significant numbers of juvenile vermilion snappers.

Some of these guests may stay a while because it’s a prime place to raise young and find food and protection from predators. (Hint: Small fish that pick off the red grouper’s parasites are particularly welcome.) By creating habitat, red grouper help marine ecosystems thrive.

Pardon their quirks, though. These environmental engineers also are neat freaks. Drop something in their holes, which can be several feet deep and up to 25 feet in diameter, and the homebody fish will quickly carry out the mess. (Watch the above video to see the fish removing a lobster’s shell from its hole after the lobster shed it.) And red grouper simply won’t put up with unruly or unwelcome company. These fish, which average 2 feet in length, can get pretty territorial and ram enemies if they don’t like predatory snappers or other grouper arriving to bother their favored, and oftentimes smaller, guests. 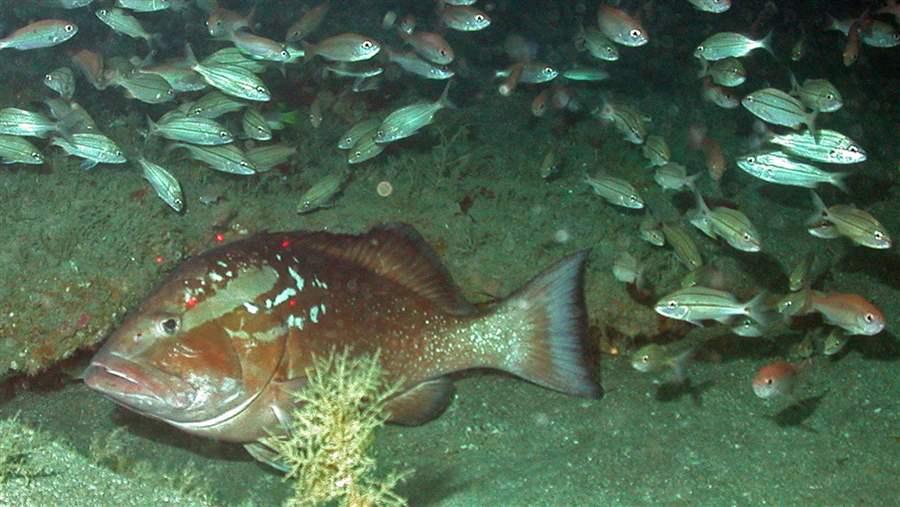 A red grouper swims at its hole, where small tomtates and vermilion snappers find refuge.

Red grouper’s unique skills and preferences make them important habitat creators and illustrate their role in ocean ecosystems. Yet the species’ population level—which has gone up and down in the Gulf of Mexico—recently have hovered just above the threshold at which the population would be declared overfished. Some preliminary indications from a new population study show that could be the case again.

The Gulf of Mexico Fishery Management Council can ensure a healthy red grouper population over the long term by taking a big picture approach. Instead of focusing only on setting catch levels, the council should also consider red grouper’s larger role in ecosystems, such as identifying their habitat needs and protecting those areas. For example, studies have shown that the number of grouper holes actively occupied increase—indicating more spawning grouper—in places where fishing along the seafloor is prohibited.

A more comprehensive approach to managing fish is something that Congress should emphasize as it renews our nation’s primary fish law, the Magnuson-Stevens Fishery Conservation and Management Act. The act is approaching its 40th anniversary and could use an update. It’s time for a new focus in fisheries management. Learn more at www.pewtrusts.org/healthyoceans.