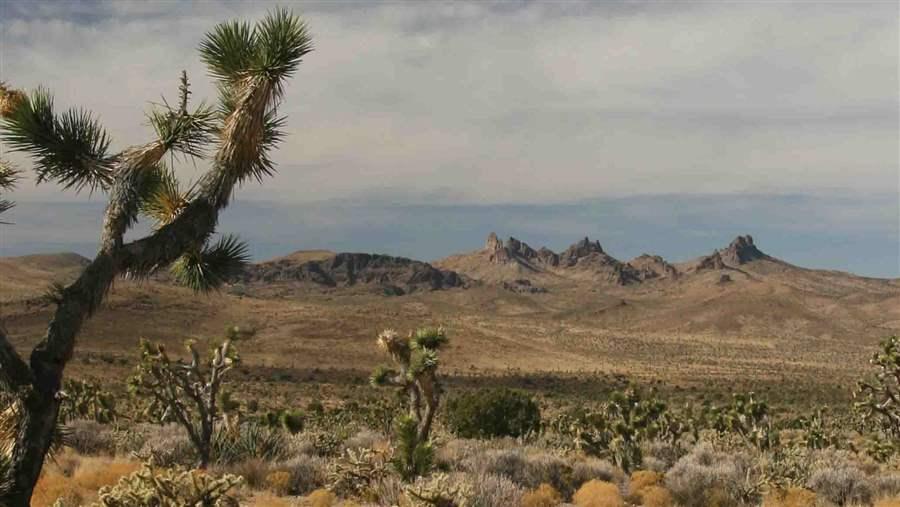 The Castle Mountains, rising out of the flat Joshua tree desert like a mighty fortress, are the dazzling centerpiece of a 20,000-acre proposed national monument in the eastern part of California’s Mojave Desert. Hart Peak dominates the area at an elevation of 5,543 feet and affords spectacular vistas of nearby Castle Peaks, the Mojave Wilderness, and numerous desert mountain ranges in California and Nevada.

The area, surrounded on three sides by the Mojave National Preserve and on the fourth by Nevada, is the site of a long-abandoned boomtown named after the Hart gold mine. The town is long gone, but the precious metal remains.

Monica Argandoña, with the California Wilderness Coalition, says a Canadian company is interested in reopening the Castle Mountain mine, which ceased operations in 2001 when  gold prices were low. “They’ve got private property in here, which they can go ahead and mine again. But we’re looking to at least get all this area around it protected.”

The Castle Mountains area is a bastion of desert life and home to an array of wildlife, including Swainson’s hawks, Gila monsters, Bendire’s thrashers, gray vireos, and Townsend’s big-eared bats. The mountains are also a target location for reintroduction of pronghorn, the second-fastest mammal in the world.

The region is a living museum of the eastern Mojave Desert’s cultural and historical resources. Visitors find elements of its Native American, Old West, and mining histories, including an obsidian flow. Nearby, Spirit Mountain is revered by many tribes and listed on the National Register of Historic Places.

The mile-high plateau features expansive forests of Joshua trees, pinyon pine, and juniper, and encompasses native desert grassland that harbors a unique assemblage of plants, including many rare species. James André, director of the University of California, Riverside’s Sweeney Granite Mountains Desert Research Center, said the Castle Mountains area may be the “most pristine component of our nation’s grasslands” and “the very definition of a floristic frontier.” Recent surveys of the area found 30 rare plant species previously unknown to the region. Although the spot is recognized for its scientific value, studies of it have been limited, making the protection of this unique place of particular importance.

This small but critical area has yet to receive the protections it deserves. Our partners in the Campaign for the California Desert have been working with Senator Dianne Feinstein (D-CA) for nearly a decade to protect such iconic landscapes as the Castle Mountains, Mojave Trails, and Sand to Snow as national monuments to ensure that future generations will find the same stunning vistas, abundant wildlife, and rich historic sites available today. Designating the Castle Mountains as a national monument would keep this landscape protected and accessible.