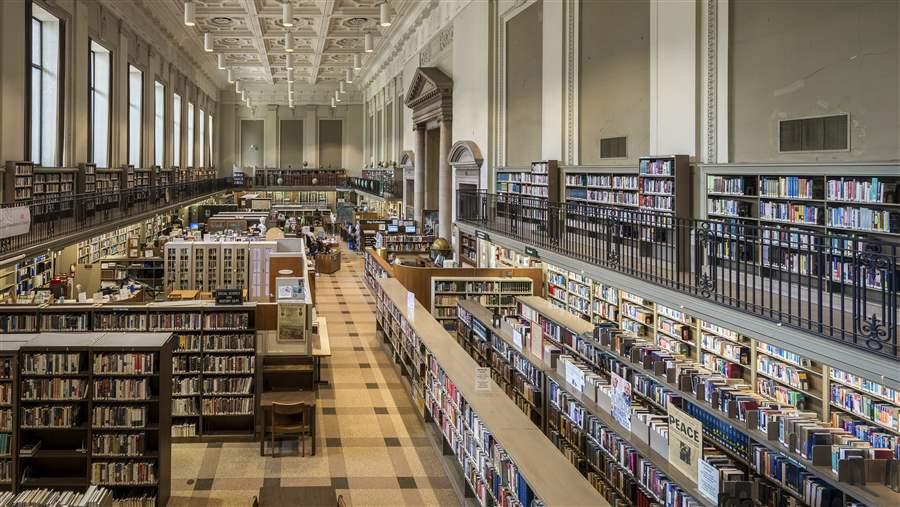 The cornerstone of the Free Library of Philadelphia is the Parkway Central location. Although visits to it and the library’s 53 branches declined in fiscal year 2015, use of the system’s resources—particularly those available online—has gone up.

One of the concerns facing those who operate, fund, and care about libraries is whether use of brick-and-mortar facilities will decline as people become more accustomed to reading e-books and accessing other services online.

The Pew Charitable Trusts’ Philadelphia research initiative explored this topic by looking at the changing demands on the Free Library of Philadelphia—the city's public library system—in 2012. Our study showed that library visits had increased 11 percent from 2005 to 2011.

With the recent release of Pew Research Center poll findings that documented a steady decline in library usage nationwide, we decided to take another look at Philadelphia’s system to see how it has been faring. We found that although visits to the library’s 54 locations have followed the national trend downward, use of the system’s resources, particularly those available online, has gone up.

What's behind the decrease in library visits?

In fiscal year 2015, which ended June 30, the total number of visits measured by turnstile counts, to the Free Library of Philadelphia decreased 7 percent from the previous year, falling from 5.6 million to 5.2 million.

This drop occurred even though the number of service hours offered increased 10 percent; in February 2015, 28 library branches began offering six-day service, up from five days a week. (Our 2012 report noted that Philadelphia had fewer evening and weekend library hours than comparable systems with higher per-capita turnstile counts.)

Officials from the Free Library have said that maintenance-related closures account for at least part of the lower turnstile counts. These closures have been an ongoing problem for the system, many of whose buildings are more than 50 years old. For instance, the Joseph E. Coleman Northwest Regional Library, the third-busiest location in the city and one of only six with Sunday hours, was closed from June through September 2015 for installation of a heating and cooling system.

Although turnstile counts—a key indicator of in-person usage—declined, library use by other measures rose slightly from 2014 to 2015.

For instance, the total number of nonelectronic items (such as books, CDs, and DVDs) that were checked out increased from 6,499,090 to 6,511,581, and the number of public computer sessions rose from 946,037 to 951,510. The addition of staff members dedicated to assisting patrons with the library’s digital resources in 12 of the system’s branches may have contributed to the increase in computer use.

And online usage rose substantially. There were 1,017,632 e-book downloads in fiscal 2015, up 30 percent from the year before, an increase that officials attribute to more available titles and an improved interface for digital borrowing. Website traffic grew by 6 percent over the same period, from 7,052,417 to 7,491,297 unique visits.

Even as more people access information and resources online, a broad mandate remains nationally for a wide range of library services, including those that usually require an in-person visit.

In the Pew Research Center survey, respondents said that libraries “should definitely” offer literacy programs, teach people how to use new digital tools such as smartphone apps, and create programs to support local entrepreneurs. Even though the report found that visits were down nationally, it also showed that 65 percent of Americans think that closing their local public library would have a major impact on their community. In 2012, 56 percent of Philadelphians said the same thing.

Meeting the large and growing variety of demands from patrons—including helping people look for jobs and health information and sign up for government benefits—continues to be a challenge for the Free Library of Philadelphia and systems across the country. So, too, is the need to balance the demands of customers who prefer to access resources digitally with those who would rather do so in person, or who have no other choice. The only constant in the ever-changing landscape appears to be the high value that citizens attribute to library services, no matter how they are delivered.