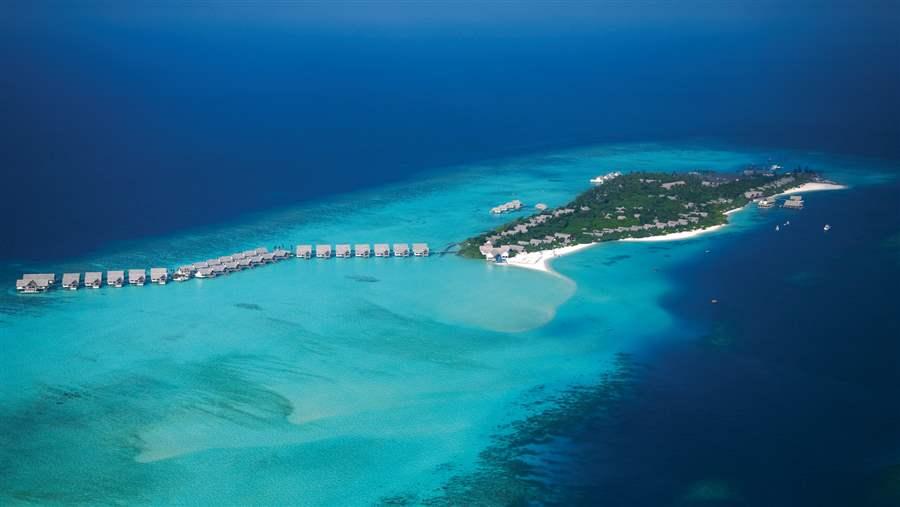 Aerial view of Landaa Giraavaru, a center of sustainable shark and ray ecotourism.

The island nation of the Maldives showed its commitment to preserving the world’s sharks in 2010, when it established a shark sanctuary in its waters. To build on that, the Maldives government and The Pew Charitable Trusts brought leaders from nations in the region together on Oct. 25 and 26 for a ministerial symposium focused on shark and ray conservation in the Indian Ocean.

Ministers and senior officials from the Maldives, an archipelago southwest of India, welcomed counterparts from Sri Lanka and the Seychelles to talk about the global crisis facing these animals. With 100 million sharks killed annually around the world, attendees discussed the urgent steps needed to safeguard these iconic species.

The Maldives exhibited global leadership by declaring its waters a shark sanctuary, where all sharks and rays are fully protected and used for profitable ecotourism. Shark and ray ecotourism is now a key part of the country’s economy, with one study estimating its annual value at $2.3 million dollars. Research has shown that sharks are worth far more alive than when killed for their fins and meat.

“It is highly encouraging to see Indian Ocean island nations come together to discuss the economic benefits of sustainable shark and ray ecotourism,” said Daniel Fernando of the Manta Trust, which advocates for conservation of manta rays and their habitats. 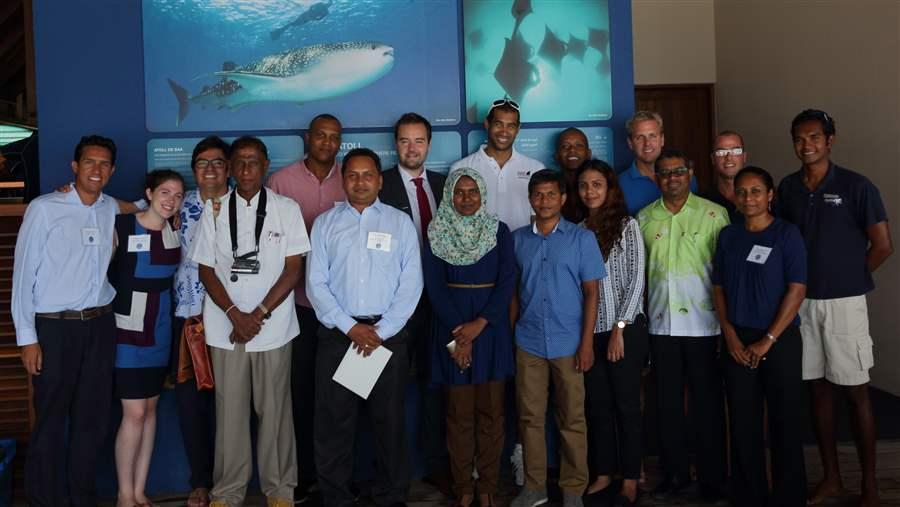 The delegates to the symposium.

The Four Seasons resort in Landaa Giraavaru hosted the symposium, which drew shark experts from around the world to one of the epicenters of sustainable shark and ray ecotourism. Presentations and discussions allowed the region’s ministers to witness firsthand why tourists travel from all over the world to see the manta rays, reef and whale sharks that are abundant in the protected Maldivian waters.

“It’s fantastic to see these governments gather and work together to develop solutions to protect sharks and rays,” said Luke Warwick, who directs Pew’s shark conservation efforts.  ‘”Through the development of shark sanctuaries, such as the one here in the Maldives, along with international protections and strong legislation wherever sharks and rays are caught, these imperiled species can survive.”

The Sri Lankan government announced at the symposium that it has submitted a proposal to list all species of thresher sharks on Appendix II of the Convention on International Trade in Endangered Species of Wild Fauna and Flora (CITES) for consideration at next year’s meeting of the wildlife trade convention in South Africa. This international conservation leadership from Sri Lanka builds on the listing last November of thresher sharks on the Convention on the Conservation of Migratory Species of Wild Animals (CMS). Thresher sharks have been identified by the International Union for Conservation of Nature as the world’s most vulnerable family of sharks, so the proposal by Sri Lanka is badly needed.

“This action will help ensure that thresher sharks survive,” said the Honorable Gamini Jayawickrama Perera, Sri Lanka’s minister of sustainable development and wildlife.  “We see severe declines in our waters and have acted to fully protect these slow-growing sharks. We want to make sure that governments around the world work together to either fully protect or limit the catch of thresher sharks to sustainable levels, so that they survive for generations to come.”

At the conclusion of the meeting, the ministers agreed on a declaration stating their joint aim to protect the Indian Ocean’s sharks and rays, both in their own waters and through collective, international action. This declaration included further leadership from the Maldives, which committed to support this Sri Lankan thresher shark proposal, and also take decisive action themselves by proposing that the silky shark is also offered protection under CITES. 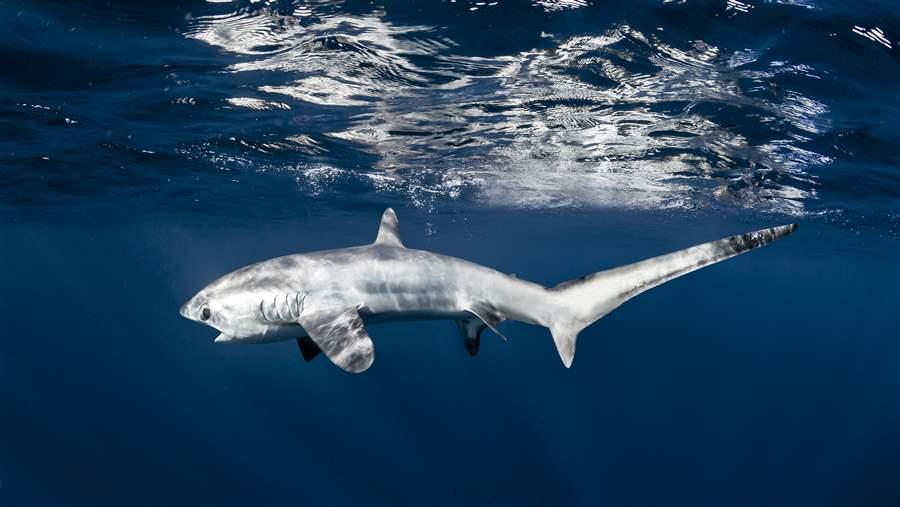 “With huge quantities of sharks still killed in the region annually, the commitments made in this declaration, and the follow-up actions that need to happen in the coming months and years will be crucial if sharks are to survive and recover in the Indian Ocean,” said the Honorable Mohamed Shainee, minister of fisheries and agriculture for the Maldives.

“The Maldives has already taken a lead in regional shark management through the creation of a shark and ray sanctuary, so these species are protected in our waters. We now are reaping the benefits of a thriving ecotourism sector. We now want the world to join us in protecting sharks and rays, starting with the adoption of these CITES proposals at the [Conference of the Parties] next year,” Minister Shainee added.

“As noted in the declaration, the Maldives will be proposing that silky sharks are protected through a CITES Appendix II listing. These are key sharks that keep our tuna fisheries healthy, and we want to see them protected and sustainably managed globally,” added the Honorable Thoriq Ibrahim, the nation’s minister of environment and energy.