October marks National Substance Abuse Prevention Month, which was first instituted by President Barack Obama in 2011. In the proclamation issued by the president, he asked Americans to “come together to acknowledge the role every person can play in preventing substance abuse and recommit to fostering a culture where all our people can live up to their fullest potential.” Despite all of the public attention and media coverage of this issue, many people do not know that drug overdose deaths, largely driven by prescription drug abuse, now exceed car accident fatalities as the leading cause of injury death in the United States and have more than doubled from 1999 to 2013.

One key component of the prevention strategy is the effective treatment of those with a substance use disorder.* Yet, according to the most recent data (2013), of the nearly 22 million Americans who have a substance use disorder, less than 20 percent received the treatment they needed. As the largest source of treatment funding, states and localities, including state Medicaid programs, play an outsized role in meeting the needs of those who require treatment. This past spring, as part of an ongoing series on health care spending by the states, Pew, in a joint effort with the John D. and Catherine T. MacArthur Foundation, released a report examining the trends in substance use disorder prevalence, treatment, and spending.

The analysis found that in 2009, the most recent year for which comprehensive data are available, the U.S. spent $24 billion on substance use disorder treatment. Most of that spending—69 percent—came from public sources, such as state and local governments, Medicaid, Medicare, and federal grants. Private sources, including health insurance and individual out-of-pocket spending, made up the difference.

This imbalance between public and private spending, which contrasts sharply with national health expenditures as a whole, has not always existed. In 1986, for example, when the country spent $9 billion on substance use disorder treatment, roughly equal amounts of funding came from public and private sources. The change has principally been driven by growth in the role of Medicaid and other state and local spending, as well as a steep reduction in the part played by private insurance. This trend is projected to continue as many states expand their Medicaid programs in accordance with the Affordable Care Act. By 2020, researchers expect public spending to represent 71 percent of the total for such treatment, with Medicaid overtaking other state and local outlays as the single largest source of funding. (See the figure below.) 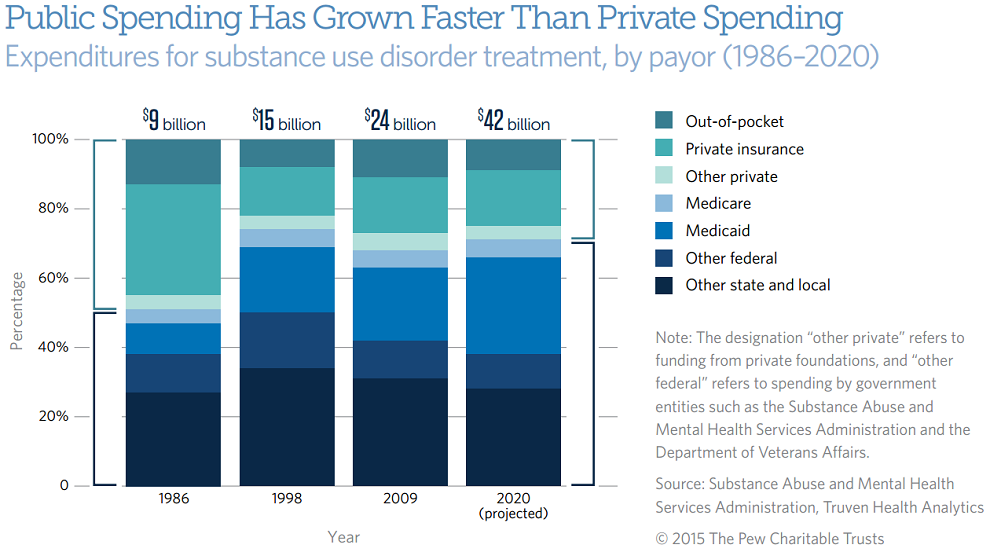 Because of these funding trends and public payors taking on a larger role in addressing the country’s substance use disorder challenges, policymakers at the federal, state, and local levels must better understand disease prevalence, most effective treatment practices, and spending trends in order to best meet the needs of those seeking treatment.

*The American Psychiatric Association revised its description of substance-related and addictive disorders in its 2013 Diagnostic and Statistical Manual of Mental Disorders, 5th edition (DSM-V), to capture a broad spectrum of severity. It combines the terms “substance abuse” and “substance dependence,” where substance abuse is a mild or early stage of substance dependence, into a single term—substance use disorder—referring in this report to dependence on or abuse of alcohol or illicit drugs, including the use of marijuana, cocaine, heroin, hallucinogens, inhalants, and the nonmedical use of prescription drugs.