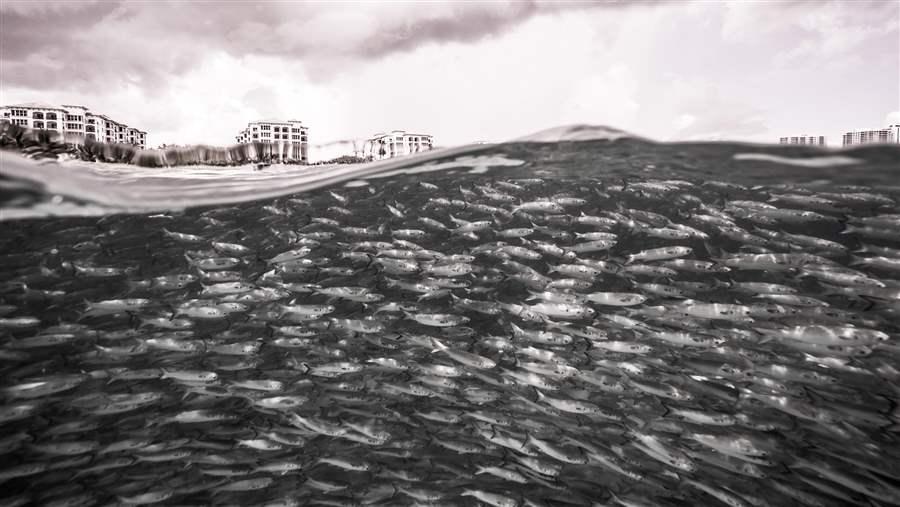 These mullet, one of many species of baitfish -- also known as forage fish -- migrating along Florida's east coast, fill the sea with food for predators ranging from pelicans to whales and tarpon. Yet growing global demand for forage species threatens their critical role in ocean food webs.

The Florida Fish and Wildlife Conservation Commission (FWC) adopted a resolution last week that enhances protection of forage fish—small species such as sardines and menhaden that serve as food for marine animals including birds, dolphins, groupers, and snappers.

Global demand is surging for forage fish which are used to make pet food, cosmetics, nutritional supplements, fertilizer, and feed for animals and aquaculture operations.

FWC commissioners pledged to support scientific research and management that will “ensure sufficient abundance and diversity of forage fish populations” to keep marine ecosystems healthy. They also promised to “remain vigilant” in overseeing forage fish and take action if their populations decline.

We are pleased the commission has formally acknowledged the vital role of prey species in marine food webs. Forage fish help sustain Florida’s vibrant fishing and related  industries, which contribute more than $12.3 billion annually to the state’s economy, produce tens of millions of pounds of fresh seafood, and support more than 100,000 jobs.

Commercial and recreational fishermen, scientists, businesses, and conservation organizations, including Pew, are among those who support this resolution. We all recognize the need to protect prey and have formed the Florida Forage Fish Coalition, led by the International Gamefish Association, to share information and ideas on how to best do that.

This coalition will continue working with the commission and others to conserve Florida’s valuable marine resources and ensure that the state keeps its reputation as the “Fishing Capital of the World.”

Holly Binns directs Pew's efforts to protect ocean life in the Gulf of Mexico, the U.S. South Atlantic Ocean and the U.S. Caribbean.