Tourist fishing is big business in The Bahamas, but exactly how big was not known until now. Scientists with the Sea Around Us project—a collaboration between the University of British Columbia and The Pew Charitable Trusts—conducted a catch reconstruction, reviewing a range of data sources to estimate unreported catch. They found that recreational anglers landed about 8,000 metric tons a year over the past 60 years—approximately half of all fish caught in the country. This more accurate estimate may allow the government to better protect the local food supply. 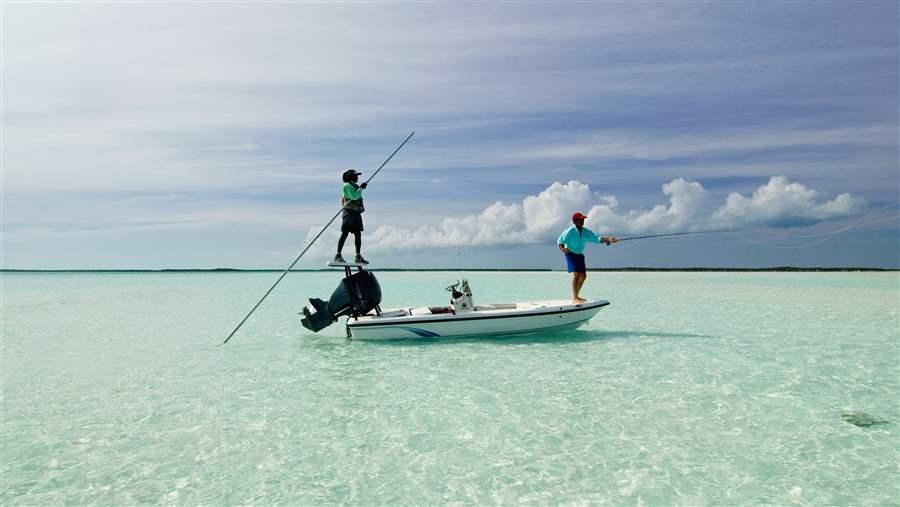 A man fishes with a guide in The Bahamas.

“We depend heavily on tourism, but it can be a double-edged sword,” says Nicola Smith, a marine ecologist from Nassau and a doctoral candidate at Simon Fraser University in British Columbia. “You could get into serious ethical issues if the majority of the natural resource needed for sustenance is diverted for tourism and not being closely monitored.”

In The Bahamas, no one is keeping regular count of all the fish that tourists catch at sea or eat in restaurants. The government tracks only large-scale commercial catch, a common practice in many countries because commercial fishing is often considered more important to the local and national economies and because small-scale operations can be difficult to monitor. This limitation largely excludes categories such as artisanal, recreational, subsistence, and illegal fishing, as well as discards—fish that are caught and thrown away—and masks the true extent of fishing worldwide.

“The government is not systematically counting any of it, despite its importance for tourism,” Smith says. “The legislation to monitor and regulate recreational fishing has lagged behind the advertising.”

As the lead author of the Sea Around Us study, co-authored by Dirk Zeller of UBC, Smith is looking at the bigger picture. Her analysis worked to “reconstruct” the catch by all fisheries sectors in The Bahamas from 1950 through 2010 as part of a global project focused on identifying total fish catch, including previously uncounted data from many countries and spanning several decades.

Catch reconstruction is based on the idea that some catch information exists outside official fishery statistics and that it can be pulled together to produce a more complete picture of the catch. In the case of The Bahamas, Smith estimated catch by subsistence fishers using population data and a conservative assumption of per-capita consumption. She estimated how much fish the tourists were landing by combining catch limits with data from government tourism surveys.

The average person doesn't care about fisheries data, but they do care about having fish to eat,” says Daniel Pauly of the University of British Columbia, who leads the global catch reconstruction effort. “Accurate catch information is critical for understanding the pressures on fish populations.

Another category of catch proved especially difficult to estimate: small-scale commercial fishing. Fishermen in this sector sell much of their catch directly to restaurants rather than to processing plants, which are monitored by the government. Smith interviewed fishers and hotel purchasing managers and found that it was common for artisanal fishers to moor at a dock to sell fish directly to a hotel restaurant. It remains unclear what proportion of the country’s entire catch can be attributed to this practice. For this study, the researchers conducted a survey to estimate per-visitor fish consumption, then calculated total catch using hotel room occupancy data.

The reconstruction showed that the total catch in the past six decades was about 885,000 metric tons, more than double the official estimate of 321,000 metric tons. The research also produced more detailed estimates of catch for artisanal, recreational, and subsistence fishing and for individual species. (See this PDF for more details). 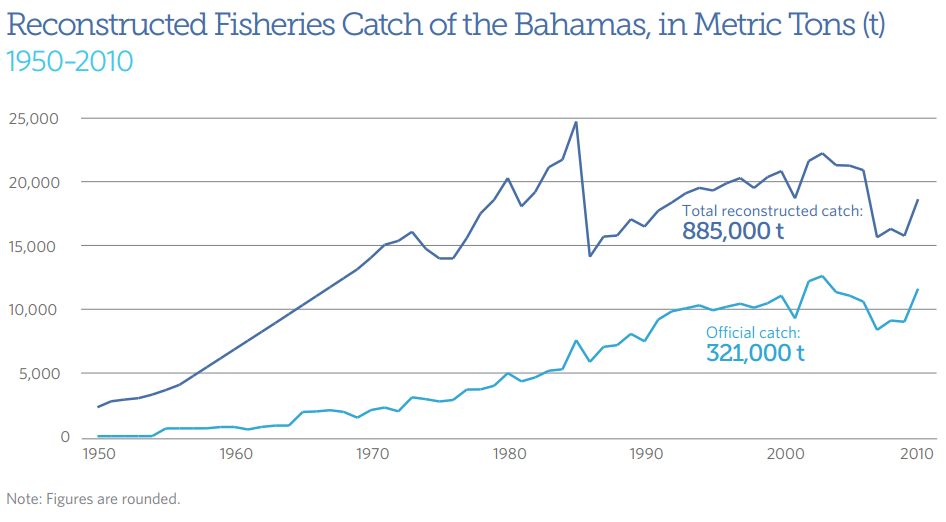 This information could be useful for managers as they monitor the country’s fisheries and try to ensure that tourists and residents have fish to eat. More results from catch reconstruction, including global catch estimates, will be available later in 2015.