The Marine Domain Awareness Workshop, which began April 15 and was hosted in partnership with The Pew Charitable Trusts and the Scripps Institution of Oceanography, identified best practices and emerging technologies that could be used to protect the sanctuary’s borders and remarkable underwater riches. The plan also will help the Pacific island nation prepare for environmental threats such as typhoons, rising sea levels, drought, and climate change. 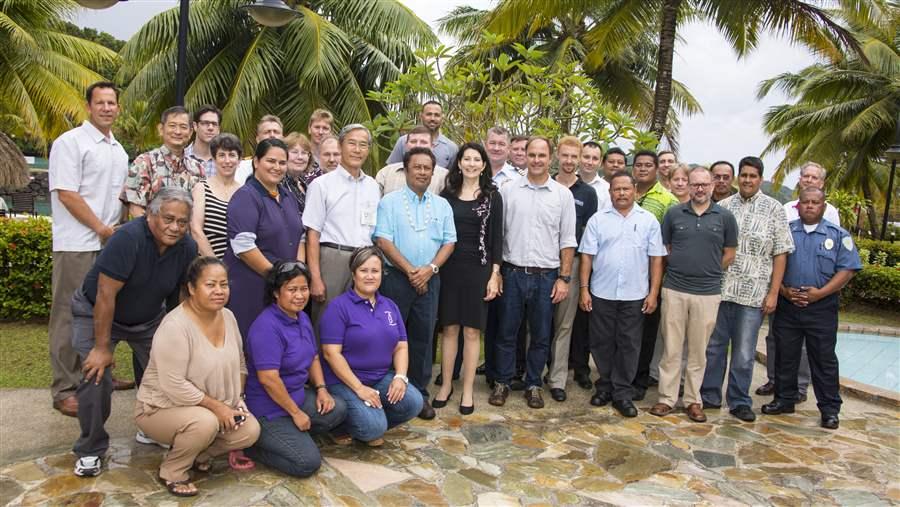 “The Palau National Marine Sanctuary will have a world-class enforcement strategy that makes use of the latest technology,” President Remengesau said on the workshop’s opening day. “Enforcing the sanctuary’s boundaries will be less complex than the current challenges presented by the multigear tuna fisheries, which means it will be easier to stop criminal activities and protect our natural resources. This sanctuary protects our beautiful ocean environment and enhances our national security.”

President Remengesau made his commitment to the sanctuary clear in his April 16 State of the Republic address. Citing overwhelming support for the proposal, he said: “Time is of the essence. We need to act now.”

Palau’s Congress would have to pass legislation to create the sanctuary. Doing so would make it easier to identify and stop illegal fishing within the country’s waters because restrictions on large-scale commercial fishing would simplify detection. All large fishing vessels would be suspect immediately if their gear was not stowed, if they slowed below transit speeds, or if they steamed in a less-than-direct route through the sanctuary.

Government organizations such as the Royal Australian Navy, the U.S. Navy, and the U.S. Coast Guard took part in the workshop, along with representatives from international groups such as the Nippon Foundation and the Pacific Islands Forum Fisheries Agency. Palau officials included representatives from the office of the attorney general, Division of Marine Law Enforcement, and the Ministry of Natural Resources, Environment, and Tourism.

Early monitoring of the sanctuary’s proposed boundaries is already benefiting the nation. On Jan. 26, Palau’s Marine Law Enforcement Division apprehended a vessel that was fishing illegally, from Taiwan (Province of China) for illegal fishing. The vessel was detected through an early version of Pew’s Project Eyes on the Seas technology, which uses satellites and multiple data sources to detect suspicious activities remotely. Officials found 304 shark carcasses and several hundred shark fins on board; vessel owners were fined $100,000. That penalty would have been significantly higher if the marine sanctuary had been in place.

The workshop also identified opportunities for partnerships to make the most of available resources and ensure the best implementation of an enforcement strategy. Enforcement costs for the Palau National Marine Sanctuary are expected to be covered through partner support and revenue generated by the sanctuary, including high-value ecotourism.