The House Education and Workforce Committee will hold a hearing April 15 to review the 69-year-old National School Lunch Program and related policies from the Child Nutrition Act. The hearing will be the first opportunity for the 114th Congress to publicly discuss reauthorization of the act, which is scheduled to expire September 30.

When legislators last renewed the law in 2010, they directed the U.S. Department of Agriculture to update nutrition standards for meals and snacks served in schools based on the latest science regarding children’s dietary needs and eating habits. Districts implemented the USDA’s healthier standards for breakfasts and lunches in the 2012-13 school year, and stronger regulations on snack foods sold at schools went into effect in the 2014-15 school year.

As this important school nutrition debate begins, here are key facts for Congress and all Americans to consider.

The great majority of parents—72 percent—favor the national standards currently in place for school meals and snacks, according to a national poll released jointly in 2014 by The Pew Charitable Trusts, the Robert Wood Johnson Foundation, and the American Heart Association. Notably, parents across party lines expressed even stronger backing for the requirement that schools include at least a half-cup serving of fruits or vegetables with every meal.

Parents Want Fruits or Veggies in All School Meals

Should schools be required to include a serving of fruits or vegetables with every school meal, or not?

Do you feel strongly about that, or not that strongly?

Parents’ broad support for nutrition standards that govern all food available in schools may reflect, in part, their negative perceptions of items traditionally sold in vending machines and a la carte in cafeterias. Right before the national snack standards took effect, about 7 in 10 parents polled said these choices were only somewhat, or not at all, healthy.

Contrary to popular anecdotes, a study published last month demonstrated that kids are eating more of their lunches since schools implemented the current nutrition standards. Over a three-year period, researchers tracked the foods students selected and measured how much they ate and discarded. They found that:

Almost all schools are meeting the standards

As of March 2014, 89 percent of school districts were serving lunches and breakfasts that meet or exceed current nutrition standards. This means that most of the more than 30 million kids who eat one or two school meals a day are enjoying healthier options with more fruits, vegetables, lean protein, and whole grains. Importantly, many schools nutrition leaders remain committed to the strong standards and have maintained or even grown student participation in meal programs as menus have changed for the better.

9 in 10 school-age kids get too much sodium

In 2014 the U.S. Centers for Disease Control and Prevention reported that children ages 6 to 18 consume on average about 3,300 milligrams of sodium a day—roughly 40 percent more than recommended in the Dietary Guidelines for Americans. Close to half of kids’ daily sodium intake came from 10 common foods, including pizza, chicken nuggets, cold cuts, and other items traditionally found on school menus. Consuming too much sodium increases the risk of developing high blood pressure and heart disease—costly medical conditions that can lead to heart attacks and strokes. The USDA’s updated nutrition standards limit sodium in school meals.

Give Schools the Tools to Prepare Healthy, Delicious Meals

Children spend more time in school than anywhere else except their homes. And 3 in 5 students&mdash;more than 30 million children&mdash;eat one or two school meals daily. Clearly, by serving healthier meals and snacks, schools can help American children establish sound nutrition and eating habits for a lifetime.

Reducing plate waste&mdash;the amount of food discarded by students&mdash;is an important goal for school food service departments within their ultimate mission: to support children&rsquo;s health and academic success by ensuring that they are well-nourished. 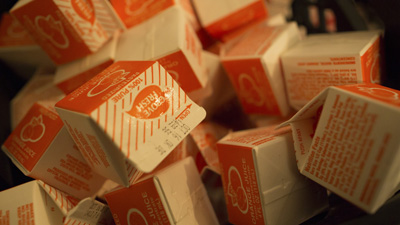 The average number of calories offered in a school lunch before the introduction of updated standards, which set an 850-calorie limit.