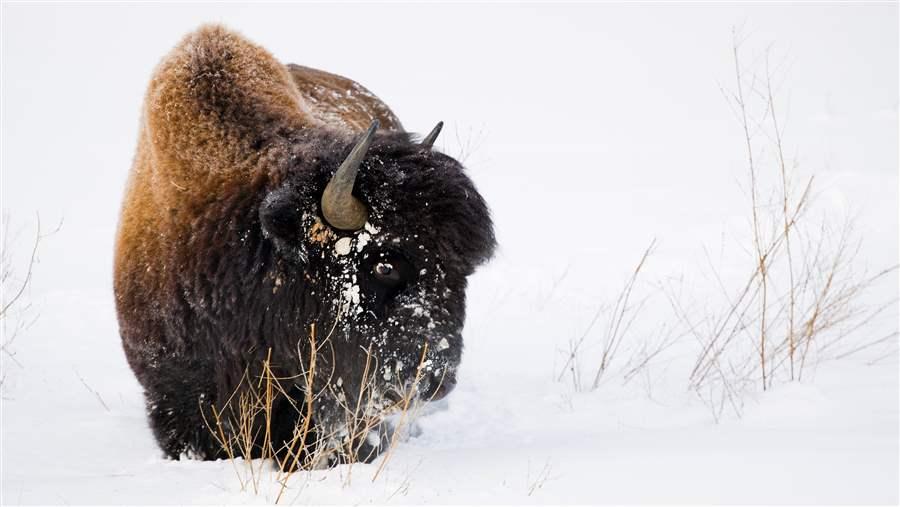 Portrait of a Wood Bison in Canada's boreal forest.

They are shaggy, swaggering icons of the North.

Wood bison, which once roamed Canada’s boreal forest in numbers estimated at nearly 170,000, hold bragging rights as North America’s largest terrestrial animal.  Standing up to 6 feet tall at the shoulder and weighing as much as 2,000 pounds, they are 15 percent bigger than their more famous cousins, the Plains bison.

The two closely related bison subspecies were almost wiped out in the latter decades of the 19th century. Wood bison once ranged across much of the western boreal region—in Alaska, northern Alberta and British Columbia, northwestern Saskatchewan, the Northwest Territories, and Yukon. The population plummeted to about 250 by the start of the 20th century, a decline attributed to myriad causes, including overhunting, disease, and habitat loss.

Conservationists, governments, and Indigenous peoples have worked for more than 100 years to restore a measure of stability to the wood bison. Wild populations exist today across parts of their traditional lands in the Northwest Territories, Yukon, Alberta, and British Columbia. Alaska is planning to release a small herd into the wild in 2015.

The province of Manitoba, meanwhile, is seeing promising results from its wood bison recovery program.

The Committee on the Status of Endangered Wildlife in Canada estimates that 5,100 to 7,100 mature free-ranging wood bison live in the country, spread across nine wild subpopulations.  The committee recently upgraded the animal’s status from threatened to “special concern” but also tempered expectations of future growth.

According to the committee’s latest examination of the species, “Further increases to the population size or the addition of new wild subpopulations is not likely, as recovery is constrained by fragmented or unsuitable habitat [and] road mortality.”

The majority of wild wood bison—about 60 percent—live in Wood Buffalo National Park, an 11 million-acre refuge that straddles the border of Alberta and the Northwest Territories.

These herds are plagued by tuberculosis and brucellosis, diseases that have persisted since infected Plains bison were introduced into the boreal forest in the 1920s. Wood bison herds in the Northwest Territories have been devastated by other diseases as well.

Still, despite the uncertain prognosis and ongoing threats, there is good news to report.

Manitoba has made important progress in safeguarding the wood bison in the past year. In October 2014, the provincial government established the 250,000-acre Chitek Lake Provincial Park in a remote area of boreal forest about 215 miles northwest of Manitoba’s capital city, Winnipeg.

The park, which will protect an area larger than Badlands National Park in South Dakota, will nurture about 300 wood bison, the province’s only free-ranging herd.

“The designation of Chitek Lake Provincial Park as a home where these bison can thrive shows the benefits that large-scale habitat protection can bring to threatened species,” said Mathew Jacobson, an officer with Pew’s International Boreal Conservation Campaign.

Pew is working with partners in Manitoba and across Canada to build support for a balanced approach to boreal forest conservation, with a goal of ensuring that 50 percent of the forest is designated for protection and that world-leading sustainable development practices are employed on the rest.

“The Manitoba government and its Indigenous partners in this area have shown great foresight by identifying this special area of the boreal for protection,” Jacobson said.

The park’s creation caps a decades-long effort to establish an area in Manitoba’s boreal wilderness for a viable wood bison population. The first animals were introduced to the Chitek Lake area, part of the Skownan First Nation’s traditional territory, in a captive herd in 1984.

In 1991, the province’s Conservation and Water Stewardship department released 13 wood bison into the central Manitoba area between Lake Winnipeg and Lake Winnipegosis, two of the largest freshwater lakes in North America.

The Chitek Lake area is near-ideal habitat for wood bison. Marshy, free from logging roads and other points of public access, it is true wilderness. It will be off-limits to mining, logging, and other industrial development. Traditional Indigenous uses such as trapping, fishing, and hunting will be allowed.

Cameron Catcheway, chief of the Skownan First Nation, which will co-manage Chitek Lake, said his people are proud to “keep the land green and respected so the buffalo can roam freely without any habitat being jeopardized.”

The Winnipeg Free Press, in a 2010 article about the Chitek Lake bison, captured the charisma of wood bison in their natural boreal environment.

“It's something to see a bison at full gallop,” the newspaper’s correspondent reported after an excursion to the area, which was then under temporary protection.

“They spring off all fours like a mule deer, all four hooves airborne at once. You almost expect their limbs, resembling stick legs, to snap under the weight of their massive torsos. Yet they can really move.”

At a time when wood bison are struggling elsewhere to maintain self-sustaining populations, the park’s creation provides hope for this species’ stability in Manitoba’s boreal region.

How they differ from Plains bison: