Rising 3,175 feet from dense woods of conifer, sword fern, and elderberry, Mount Hebo is one of the highest peaks in the northern Oregon Coast Range. Originally dubbed “Heave Ho” by pioneers because of the way the peak seemed to erupt from the surrounding forest, the name morphed into “Hebo” over the years. North of the summit lies the last remaining roadless area in northwestern Oregon, providing a wildland experience that is unique in this part of the state.

Native Americans and early settlers blazed a trail over the mountain. For generations, the so-called Pioneer-Indian Trail served as the primary link between the Tillamook region on Oregon's coast and the interior Willamette Valley. The trail nearly disappeared when a wagon road was built around the mountain in 1882, but it was rediscovered by a U.S. Forest Service employee in 1975 and rebuilt in 1984. 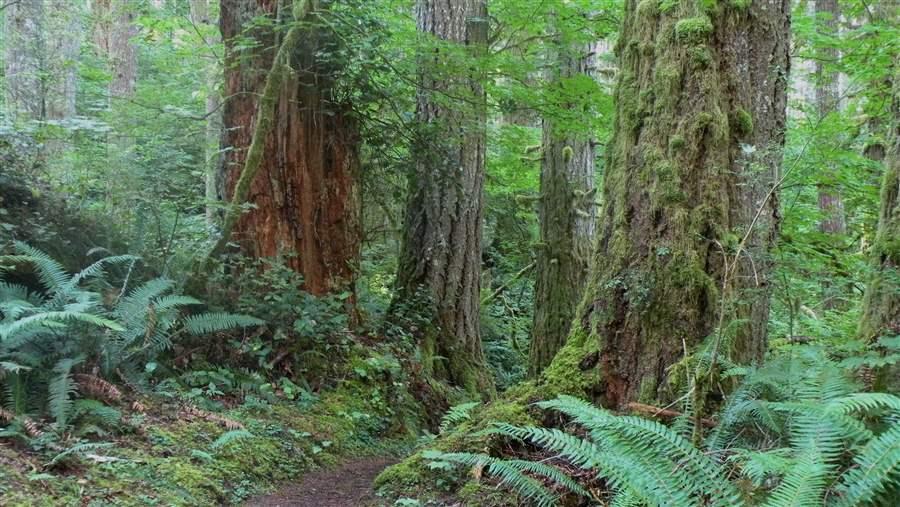 Trees along the Niagara Falls Trail on the flanks of Mt. Hebo.

Mount Hebo is part of the checkerboard pattern of forests in western Oregon that are overseen by the U.S. Bureau of Land Management. The area includes part of a Northwest Forest Plan key watershed, which federal agencies have identified as important for clean drinking water and fish populations. Mount Hebo also borders the Nestucca River, which is eligible for designation under the Wild and Scenic Rivers Act. Pew is working with local partners to ensure that Mount Hebo and the lands and rivers that surround it are forever protected for future generations by making this special place a wilderness area.

Because it is located in the Oregon Coast Range's wettest spot, Mount Hebo can get several feet of snow in the winter. Its prominent lookout is a popular day hike for those willing to climb far above the conifer forests of western hemlock, noble fir, Sitka spruce, western red cedar, and Douglas fir. On a clear day, a visitor can fully experience the breathtaking scope of the Northwest's landscape, from the true horizon at the Pacific Ocean toward the west to as many as five snowcapped Cascade mountains—Hood, St. Helens, Jefferson, Adams, and Rainier—more than 100 miles inland to the east.

Mount Hebo’s sheer height and steep slopes host a mosaic of vegetation: massive old-growth fir trees sheltering a network of hiking trails and campsites in the lowlands; a stark landscape of gnarled, wind-swept shore pines clinging to the mountaintop; bogs and alpine meadows teeming with wildflowers and edible plants. Indian paintbrush, Oregon grape, Oregon wood sorrel, and huckleberry are but a few of the plants and wildflowers that visitors can find along the trail.

This multitude of microclimates create healthy habitat for fish and wildlife.  The Nestucca River and its tributaries—the Trask, Kilchis, and Wilson rivers—wind through the lowlands of Mount Hebo and provide a stronghold for some of Oregon’s most hearty coastal salmon species. In the forests live red-tailed hawk and bald eagle, while the bogs and meadows are home to elk, beaver, and the endangered silverspot butterfly.  So healthy is the population of endangered butterflies that a federal-state partnership relocates them to other sites along the Oregon coast to establish new populations and support their recovery.

From 1956 to 1980, Mount Hebo was the site of a U.S. Air Force radar station, which was part of the nation’s air defense network during the Cold War. Twenty-seven military homes were built at the horse trail head, and huge doors were installed in the slope of the mountain. Old trails leading to the post can still be found, but the homes are gone and the doors were bulldozed years ago. The federal government has removed almost all evidence of the facility and returned the site to its natural state. A small plaque commemorates those who served atop the mountain.

Today, hikers visit the area to walk the eight-mile trail, experience the views, and pay their respects to those who served our nation. These visitors provide a much-needed boost to the community through dollars spent at local businesses. Protecting the land around Mount Hebo as a wilderness area and designating the rivers that run through it as Wild and Scenic Rivers affords a rare opportunity to safeguard a large swath of Oregon's natural landscape and heritage while helping to support the economic vitality of the region.