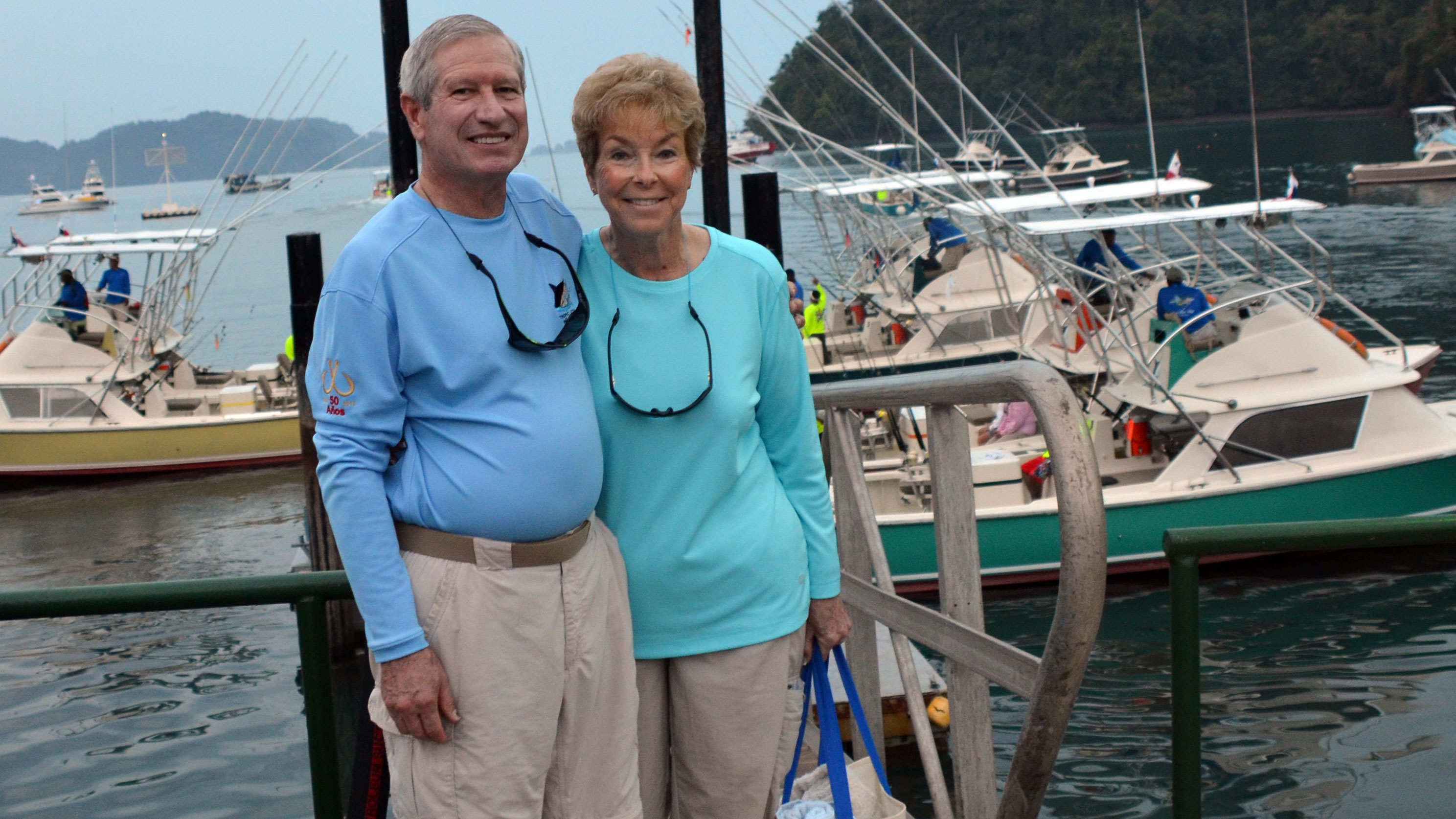 Bob and Sally Kurz have shared a deep passion for fishing throughout their 47-year marriage. Bob’s career as a naval officer enabled the couple to fish the ocean from Guam to Norfolk, Virginia.

Now retired and living in Southern California, the Kurzes remain as enthusiastic as ever about catching billfish all over the world. They’ve also become leaders in conservation, working to ensure that future generations of anglers have the same opportunities they’ve enjoyed.

Over the past couple of years, the couple has advocated for forage fish conservation at the Pacific Fishery Management Council. But they have a long history of leadership positions in numerous recreational fishing organizations, at the global level through the International Game Fish Association, nationally through the National Coalition for Marine Conservation (now known as Wild Oceans), and in Southern California through the Balboa Angling Club and Laguna Niguel Billfish Club. More recently, they have supported The Pew Charitable Trusts and other organizations working to transition commercial fishing away from drift gillnets that target swordfish but entangle and kill many other marine species such as marlin, which holds a special place in the hearts of sport anglers.

The Kurzes know that conservation begins with knowledge, so they’ve led the way in getting recreational anglers directly involved in research. Most notably, they worked with Stanford University marine biologist Barbara Block in 2009 to organize the Great Marlin Race, in which anglers affix satellite monitoring tags to billfish that they then release. At a cost of $4,500, each tag is sponsored by an angler or organization participating in fishing tournaments around the globe. The data help anglers and scientists better understand the migratory habits of these prized fish. A total of 201 tags have been deployed through the program, which expanded in 2011 with the involvement of the International Game Fish Association.

Questions for Bob and Sally:

Q: How did you get into fishing?

Bob: For me, it was a result of my dad who was in the boat business where we lived in Long Island, New York. Having a boat and being out on the water at an early age, fishing and boating seemed to go hand in hand.

Sally: I really was not into fishing until I married Bob. When we were stationed in Hawaii during the late 1960s, early 1970s, you needed to have some kind of hobby. Otherwise, you’re going to get island fever.

Q: How did the Great Marlin Race get started?

Sally: It was actually started to help commemorate the 50th anniversary of the Hawaiian International Billfish Tournament.

Bob: We knew from traditional tagging studies that billfish travel long distances, often thousands of miles. But we didn’t know where the “ocean highways” were, the environmental factors that influence the fish’s behavior, or their

migratory patterns. We wanted to learn a lot more about where they go and how they get there, their diving behavior, and the conditions they experience in terms of depth and water temperature.

Q: What have you learned?

Bob: These fish do travel significant distances from their initial capture. One traveled almost 5,000 miles from where it was tagged in Puerto Rico until the tag automatically released 120 days later off the coast of West Africa. As we gather data from around the globe, we begin to paint a picture that can help fishery managers better understand what these fish are doing and where they’re going. That information can be used to manage the overall fishery and the various techniques, such as gillnets and long-lining, to better ensure the long-term survival of these magnificent species.

Sally: We’re also seeing areas where we know the fish are spawning. These are probably areas that we should protect, so that these billfish have safe breeding grounds.

Q: Do you get a sense that most anglers support conservation?

Bob: Yes. Just because you’re a fisherman, be it commercial or recreational, I don’t think that’s inconsistent with practicing good conservation. People are beginning to understand that the inhabitants of the ocean are not an unlimited resource. Fish species are a renewable resource, as long as we take the long-term view and use responsible fishing methods to ensure their long-term sustainability and survival.

Sally: And it’s not just about the targeted species. Anglers are also thinking about the need to conserve forage fish. If you don’t have food in the water, you’re not going to have the billfish and other predator species people love to catch.

Q: Bob, you recently testified to the Pacific Fishery Management Council regarding drift gillnets. What concerns you the most about this method of fishing?

Bob: It’s very indiscriminate. When you submerge a net that’s a mile long or more for several hours at a time, you’re going to catch a lot of species in addition to the targeted swordfish. Whether those are whales, dolphins, seals, sea lions, turtles, or marlin, it will kill basically anything that swims in its path.

Sally: If you could get a film and see what comes in when those nets are pulled up, I think it would upset a lot of people.

Q: How long have you been involved in this issue?

Bob: In the early 1980s, when gillnets became the fishing method of preference, a group of recreational anglers, including Sally and myself, went to Sacramento and expressed our opposition to the state Fish and Game Commission. Here we are more than 30 years later, and we’re still having the same conversation. How long does it take for us to figure out this is an indiscriminate form of fishing that really has no place in today’s environment?

Q: Many of your fellow anglers may share your concerns about drift gillnets and protecting forage fish, but they don't participate in the public process. What advice would you give to others on how they can get involved?

Bob: It really starts with the angling clubs. Sally and I are active in several, and they are in the best position to make sure the recreational fishing community can be made aware when there is a need to write a letter or testify at a meeting to ensure the long-term future of the resource. Everybody is going 100 mph these days with work or families, but fishing groups such as the International Game Fish Association and Wild Oceans are working to make it easier for people to weigh in to make sure we manage the resource in a way that will keep it healthy for future generations.

Sally: Additionally, social media and email campaigns can be very effective in getting the message out. Likewise, it is an easy way for people to quickly and easily respond.