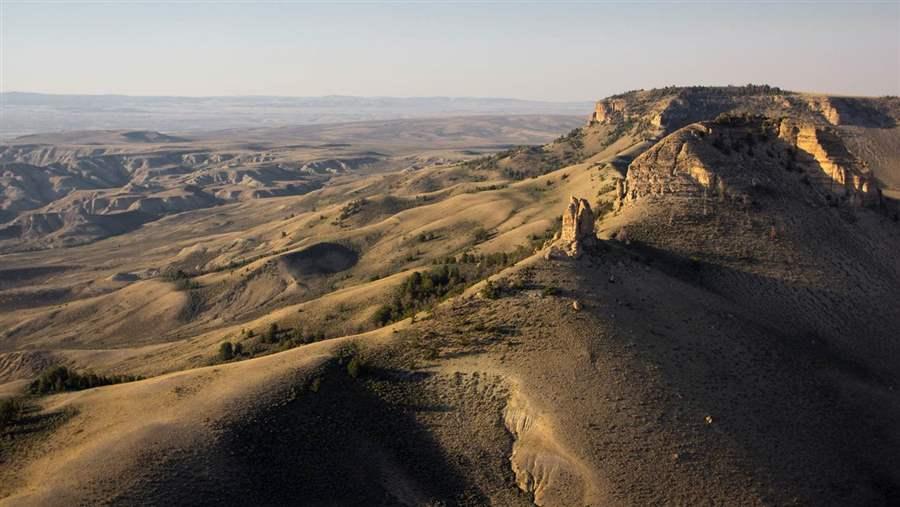 In southwestern Wyoming is a vast and rugged landscape known locally as both the Northern Red Desert and Jack Morrow Hills. This land encompasses multicolored sandstone badlands, migrating sand dunes, expansive wetlands, rolling sagebrush bluffs, and ancient volcanic cores. It encompasses 622,000 acres, overseen by the Bureau of Land Management, and is known for vistas of wide and lonely spaces, remarkable biological diversity, and plentiful opportunities for backcountry hunting and other recreation. Much of the area has remained remarkably undeveloped.

The Northern Red Desert boasts many spectacular and unusual geological and natural features, including the Boar’s Tusk formation, an ancient volcanic plug composed of lamproite rock that rises nearly 400 feet above the surrounding dune fields; and the Killpecker Sand Dunes, the second-largest active sand dune complex in the world that stretches 55 miles east, from the Green River Basin across the Continental Divide into the Great Divide Basin.

Evidence of centuries of human habitation and migration is scattered throughout the area, from innumerable paleontological features and Native American traditional cultural areas and sacred sites to numerous signs of the westward expansion of Europeans. Some of the best remaining intact sections of the historic Oregon, California, Mormon, and Pony Express pioneer trails traverse this portion of Wyoming. The area is renowned for historical places such as the Crookston Ranch, the Tri-Territory Marker, and Indian Gap Trail.

Recently, the longest mule deer migration ever recorded was discovered in western Wyoming, where deer travel from the low-elevation winter ranges near Rock Springs, through the Jack Morrow Hills, and along the western foothills of the Wind River Range, following a 150-mile-long trail to the high mountain slopes surrounding the Hoback Basin. On this journey, the second-longest migration of hooved animals in North America, deer travel across sand dunes, lake and river crossings, multiple highways, and more than 100 fences. In the fall, the mule deer head south along the same route, returning 150 miles to their desert wintering grounds.

Scientists working at the Wyoming Migration Initiative have been studying the mule deer’s long journey, as well as the migrations of bighorn sheep, elk, moose, and pronghorn antelope across Wyoming, and have documented the importance of wilderness areas in the migrations undertaken by those animals. The health of these herds depends on their ability to seasonally migrate from low-elevation winter ranges to high-elevation summer ranges.

The future health of these big game herds is one of many compelling reasons that advocates are working to ensure that the lands in the Northern Red Desert are protected. Keeping migration corridors intact across a variety of landscapes and jurisdictions, including private and public ownerships, by buffering the corridors from surface disturbances will allow herds to stay robust.

Local communities and visitors from across the United States and around the world cherish these wild lands and the surprising variety of animals that live there. Looking forward, conservationists hope that many acres in the Northern Red Desert are protected for generations to come.