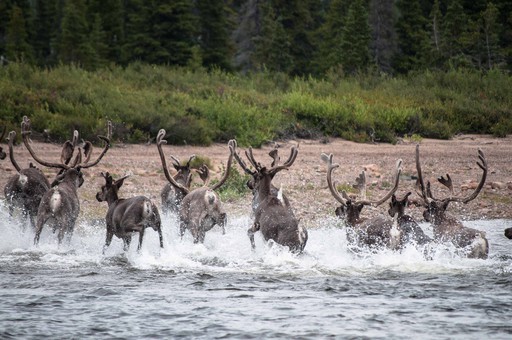 A herd of caribou crosses the George River in Quebec’s boreal forest region.

A renewed commitment to boreal forest conservation by the Canadian province of Quebec is being praised as one of the major accomplishments of the International Union for Conservation of Nature’s World Parks Congress in Sydney, Australia.

In a news release issued at the close of the Nov. 12-19 gathering, the IUCN listed Quebec’s decision “to protect 600,000 km² [about 231,500 square miles] from industrial activity to conserve biodiversity” as one of the meeting’s most significant outcomes.  The World Parks Congress is a once-a-decade event that helps shape the global agenda for land and marine parks and protected areas.

"IUCN and all participants gathered at the World Parks Congress welcome this major commitment on the part of Quebec,” said Julia Marton-Lefèvre, the IUCN’s director general. “This represents a major contribution to ‘the Promise of Sydney,’ which aims to position the protection of nature at the heart of sustainable development strategies."

Quebec’s boreal region plays a vital role in helping to regulate the Earth’s climate by storing 31 billion metric tons of carbon in its soils, peat, and forests.

It is the breeding ground for 300 million to 500 million birds of 180 species, including threatened species such as the harlequin duck, Barrow’s goldeneye, Canada warbler, and olive-sided flycatcher.

The province’s boreal region also supports more than 25 percent of Canada’s woodland caribou and the world’s largest herds of barren-ground caribou, and it contains nine of North America’s 35 most unfragmented and pristine river systems. It is home to more than 30 indigenous communities representing nine distinct cultures.

Couillard stated that his government “reiterates its commitment to dedicate, by 2035, 50% of the Plan Nord territory to purposes other than industrial ones, to environmental protection and the safeguarding of biodiversity.”

The Plan Nord was launched by a previous Quebec government in 2011 and was immediately hailed as one of the largest land conservation initiatives in history. It covers 75 percent of the province, an area twice the size of France.

Half of the 1.2 million square kilometers (463,000 square miles) of northern territory covered by the Plan Nord would be safeguarded. This protection will be vital to maintaining the health and natural integrity of the boreal forest in Quebec, an integral part of the largest intact expanse of forest remaining in the world.

The other half of the territory covered under the Plan Nord will be subject to strict sustainable development practices.

“We are delighted that Premier Couillard has recommitted to the important conservation commitments of the Plan Nord,” Jacobson said.

“Premier Couillard has demonstrated that his government is ready to take the helm of one of the largest sustainable development initiatives in history,” he added. “The Plan Nord provides a global model for comprehensively addressing economic concerns, the protection of the world’s last intact landscapes, and the rights of the indigenous people who live there.”