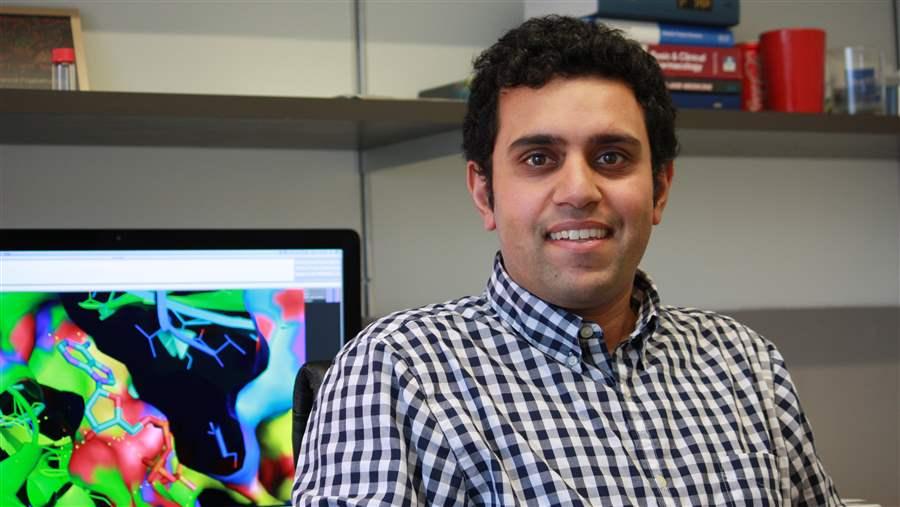 Arvin Dar, a member of the inaugural class of Pew-Stewart Scholars for Cancer Research, studies chemical biology and is an assistant professor in the oncological sciences department at the Icahn School of Medicine at Mount Sinai in New York. Pew sat down with him to learn more about his efforts to develop novel treatments for some of the most aggressive cancers.

Q: What led you to pursue a career in science?

A: First and foremost, I love being a scientist. I fell in love with being a research scientist when I was an undergraduate student at the University of Western Ontario. Going into university, I thought I might become a physician like my father, who is an oncologist, or a scientist like my mother, who majored in chemistry and biology.

It was a summer research project focusing on a process called transposition that really got me hooked on hands-on research. Transposons, or “jumping genes,” are DNA sequences that move around the genome. I worked purifying proteins and recreating parts of that reaction in test tubes, and spent that summer learning the ropes of how to set up experiments. That’s when I learned the power of science, how you could break down complex problems into digestible pieces, and I just fell in love with the process.

Q: What are you researching now?

A: The goal of my research is to develop novel treatments for cancers, and my focus is on a gene called Ras. Mutant forms of Ras are involved in more than 20 percent of cancers, including pancreatic cancer and melanoma—some of the most aggressive types.

During my postdoctoral fellowship at the University of California, San Francisco, I was studying an enzyme called kinase suppressor of Ras, or KSR, in the lab of Kevan Shokat, who is a 1996 Pew scholar. We discovered that, in one configuration, KSR keeps Ras from doing its job, but in another configuration, it actually facilitates Ras activity—stimulating other genes that lead to the increased cell division we see in cancer.

Now, my lab at Mount Sinai hopes to find small molecules that can lock KSR into its Ras-blocking conformation. We then want to know whether any of these small molecules can stop the increased cell division triggered by the overactive forms of Ras.

Q: How might your findings lead to cancer cures?

A: There are a lot of these proteins—like KSR—that look like active enzymes, but they’re not actually active. When you’re thinking about how to make a drug that targets an enzyme—which are proteins that catalyze reactions—you’re usually trying to block the enzyme’s activity. But what we’re trying to do is actually target a protein that’s consistently inactive.

No one has ever come up with a drug to target these kinds of proteins, but we know that many of them probably are important in diseases. We’re focusing on KSR because of its role in Ras-dependent cancers, but we’re hoping that we can figure out the paradigm of how to target an inactive enzyme for therapeutic applications. That could be important for cancer, and it could be important for other diseases, as well.

Q: Now that you are leading your own lab, what do you look for in the scientists working with you?

A: One of the key things I look for is enthusiasm for the area. It’s not necessarily critical to me that someone’s background matches the project they’re working on. It’s really more the enthusiasm to want to learn and to try something different.

I’ve really enjoyed having graduate students joining my lab because they come with limited or almost no training, as well as postdoctoral fellows that want to learn new areas or techniques. In both cases, there are no preconceived ideas. It’s cool to have people who will just jump into an experiment and aren’t thinking why something won’t work; they just think about the positive, why it will work. Some amazing things come out of that, I think.

Q: Is that the kind of thinking that can lead to novel treatments?

A: I hope so. The majority of drugs fail in late-stage clinical trials because there’s not enough effect on the tumor relative to the toxic side effects of the drug. When the success rate of drugs is less than 5 percent, a lot of drugs succeed because of reasons that were never originally intended, and some fail because of reasons that we never understand. We want to make an impact by creating therapies that work and have minimal side effects, but we also want to understand why current approaches aren’t working well.

Q: How do you think your work will be enabled by your Pew-Stewart award?

A: To be part of the inaugural group of Pew-Stewart scholars is an amazing boost to me and the lab and gives us a great sense of confidence moving forward. But this is more than an award to me; it’s an opportunity to be a part of a community of scientists who aren’t only in different areas and talking to each other, but who support each other in developing their science in their research. I’m really looking forward to the opportunity to get to know the other scientists. I expect that learning what other people are doing at the cutting edge of their different areas will feed back into my own lab and will make our own science that much better.

The Pew-Stewart Scholars Program for Cancer Research is a national initiative—funded by the Alexander and Margaret Stewart Trust and administered by Pew—launched in 2014 to support promising early career scientists whose research will accelerate discovery and advance progress to a cure for cancer. This article is part of a series highlighting Pew’s biomedical programs, which have supported promising beginning researchers in the health sciences since 1985.