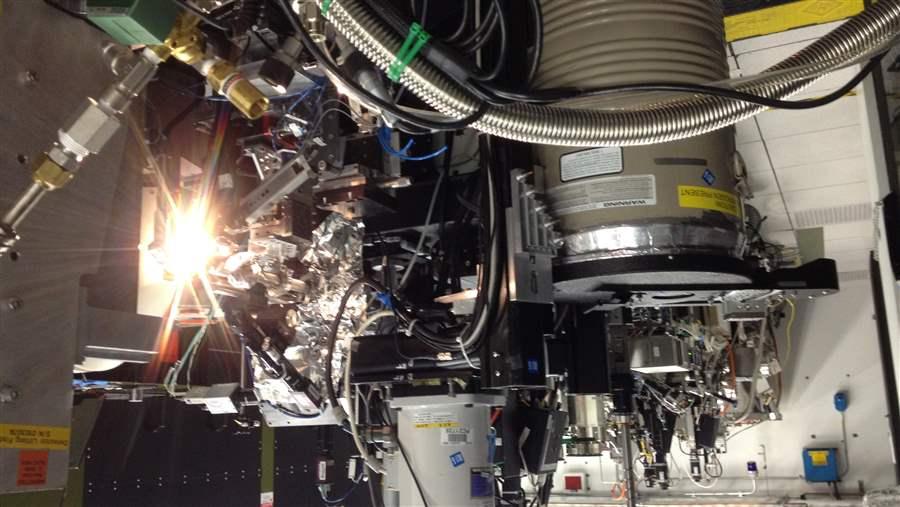 The image shows the inside of the XPP endstation at the LCLS, the world's first X-ray free electron laser (XFEL), and the most powerful source of X-rays in the world.

Three scholars in Pew’s biomedical programs received 2014 Packard Fellowships in Science and Engineering from the David and Lucile Packard Foundation on Oct. 15. The 18 Packard fellows will each receive a grant of $875,000 over five years to support their research.

The Packard fellowships are an investment in an elite group of scientists and engineers who have demonstrated vision for the future of their fields and for the betterment of our society,” said Lynn Orr, chairman of the Packard Fellowships Advisory Panel. “Through the fellowships program, we are able to provide these talented individuals with the tools and resources they need to take risks, explore new frontiers, and follow uncharted paths.”

James Fraser. A 2014 Pew biomedical scholar and assistant professor at the University of California, San Francisco, Fraser is using cutting-edge X-ray instrumentation in his lab to investigate the role of enzymes in disease. Traditional techniques such as X-ray crystallography often do not capture the structural contortions enzymes perform as they work, instead yielding static images of a moment in time. Using a novel X-ray free electron laser, Fraser aims to capture how enzymes shift shapes as they engage in their chemical duties to assess how these movements are altered by mutations that disturb their activity.

Sabine Petry. A 2014 Pew biomedical scholar and assistant professor at Princeton University, Petry is researching certain aspects in the process of cell division: how cells acquire their shapes, position organelles, move materials, and segregate chromosomes. The cytoskeleton, which resembles a skeletal system, organizes these elements.  By revealing the mechanisms of the cytoskeleton, Petry hopes to learn more about its potential malfunctions that lie at the heart of many diseases involving cell proliferation and cancer.

Agnel Sfeir. A member of the 2014 inaugural class of the Pew-Stewart Scholars for Cancer Research,* Sfeir is an assistant professor at New York University’s Langone Medical Center investigating the genome of mitochondria, the powerhouse of the cell. By revealing the manner in which errors in mitochondrial DNA occur, she hopes to develop techniques that will repair mitochondria and in turn devise strategies to prevent diseases such as cancer.

*The Pew-Stewart Scholars for Cancer Research is a national initiative funded by the Alexander and Margaret Stewart Trust and administered by Pew to support promising early career scientists whose research will accelerate discovery and advance progress to a cure for cancer.