South Australia’s sea life is swimming safer thanks to a new network of marine parks and sanctuaries that were established as of 1 October.

Made up of 19 marine parks at key locations off South Australia’s temperate coastline, this is the first comprehensive network in Australian waters outside the Great Barrier Reef. Essential to the network are 83 highly protected sanctuary zones where fishing and mining are not allowed. These safe havens for South Australia’s marine life will help to restore healthy fish stocks and ecosystems and ensure they stay robust into the future.

The network protects expanses of highly biodiverse areas, including wild and beautiful coastlines and island arcs, and many endemic species. One such seascape is the Nuyts Archipelago, which in the early 1700s may have been one of the settings for Jonathan Swift’s Gulliver’s Travels. 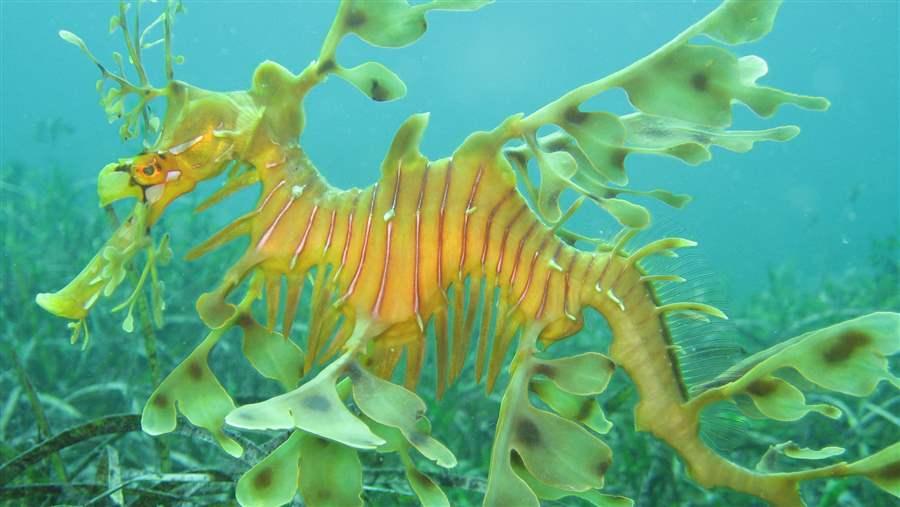 The leafy sea dragon. In the same family as seahorses, these solitary creatures feed on plankton and small crustaceans. This sea dragon is the marine emblem of South Australia.

Visitors are not only drawn to South Australia as one of the best places in the world to see these species in the wild, but also because it is home to some of the country’s best dive sites and surf breaks.

The protection of this network comes after more than a decade of work by environmental groups, local communities, scientists and the government to establish secure safe havens for the area’s unique marine ecosystem.

“This is more than just a win for conservation. All around the world, marine sanctuaries produce long lasting financial opportunities for local communities and businesses. The direct economic benefits for SA through ecotourism alone are estimated to be worth $50 million over the next 20 years,” said Grady. “By protecting feeding and breeding areas, these sanctuaries will restore vigor to the species and ecosystems so that we can all benefit from a healthy marine environment well into the future.”