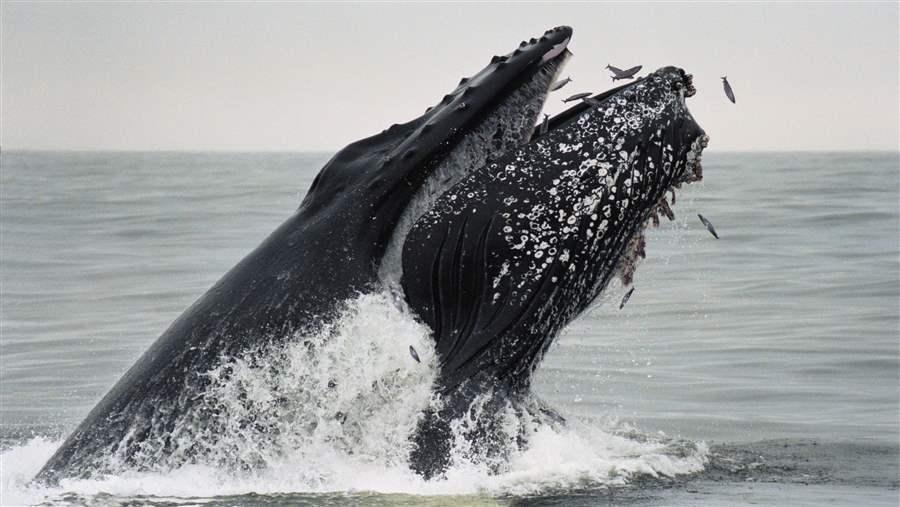 Chances are you’ve never heard of a saury or a sand lance. Most people haven’t, but these fish are a big deal to our Pacific Ocean.  This month, West Coast fishery leaders took an important step toward protecting these and dozens of other forage fish, the small species that are eaten by larger animals and sustain a healthy and balanced marine ecosystem.

As part of its first move toward ecosystem-based fisheries management—a more holistic approach to ocean oversight—the Pacific Fishery Management Council wants to prohibit new fisheries on these species until science shows that such operations will not harm the rest of the ecosystem. The next step is for the public to weigh in and demonstrate support for this visionary move. If all goes as planned, the council will take final action in March, clearing the way for the federal government to enact legally binding protections.

Some of the species proposed for protection, including Pacific saury, sand lance, and lanternfish, are little-known to the general public but occupy a critical place in the middle of the ocean food web. Because many are fished heavily elsewhere in the world, Pacific fishery leaders want to put basic conservation measures in place as soon as possible, before industrial-scale fisheries could begin off the West Coast.

“Fishery leaders on the West Coast deserve credit for acting with foresight to protect forage fish, which form the linchpin of one of the most vibrant ocean ecosystems on Earth,” said Paul Shively, who manages Pacific Ocean conservation efforts for The Pew Charitable Trusts.

The West Coast’s California current ecosystem is one of only five in the world characterized by an upwelling of cold, nutrient-rich water fueling the growth of phytoplankton. As forage fish feed on plankton, they form large masses known as bait balls, which in turn provide a rich food source for an astonishing array of ocean life. A recent decade-long study revealed that tunas, sharks, seabirds, seals and whales cross the ocean every year to feed near the relatively narrow continental shelf along the U.S. West Coast.

The ecosystem sustains human life, as well: In California alone, a productive marine food web helps to generate almost $43 billion in ocean-dependent economic activity annually, according to a study cited in 2006 by the West Coast Governors Alliance on Ocean Health.

A draft environmental assessment produced by the Pacific council’s ecosystem work group cited the “spectacular growth” of the global aquaculture industry—and the use of wild-caught forage fish to feed farmed seafood—in raising the possibility that forage fisheries could expand on the West Coast.

“Worldwide demand for protein from our oceans is on an upward trajectory,” Shively said. “It makes sense for fishery managers to put basic conservation measures in place before new fisheries begin. It’s a great example of a responsible approach to managing the ocean resources that we all share.”

The Pacific Fishery Management Council, meeting in Spokane, Washington, on Sept. 12, unanimously supported a proposal to amend existing fishery management plans to prohibit new commercial fishing for forage fish species  without a rigorous prior review. This approach would allow small numbers of forage fish to continue to be caught incidentally in existing fisheries for salmon, groundfish, coastal pelagic species such as sardines, and highly migratory species such as tuna.

Seven broad groups of forage species would be folded into each of the council‘s existing fishery management plans, where basic conservation measures could be set to prevent the development of new  commercial fishing until the council has a chance to assess the effect on the rest of the food web. Species to be protected are round and thread herring, lanternfish, sand lance, saury, silverside, smelt, and several types of squid.