Susan McConnell, a 1989 Pew scholar and Susan B. Ford Professor of Humanities and Sciences at Stanford University, is one of 15 U.S. scientists who were named 2014 Howard Hughes Medical Institute Professors.

The HHMI professors program, created in 2002, awards $1 million over five years to leaders in science education. The funding is meant to help these researchers introduce innovative approaches in teaching science to undergraduate students. This year’s HHMI professors were announced in June.

McConnell, in an interview with public broadcaster KQED, described how she would use the award to administer her course, “The Senior Reflection.” Instead of a senior thesis, students produce creative works—such as podcasts and graphic novels—to communicate scientific ideas. The students are mentored by local artists.

While she studies developmental neurobiology in her laboratory, McConnell is also an active conservation photographer whose images of Namibian elephants have appeared on the cover of Smithsonian magazine.

“I understand how potent the arts can be in communicating science,” she said.

Read the full article from KQED. 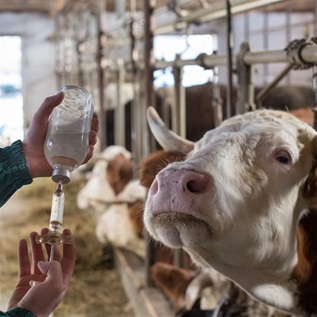 October 27, 2021 FDA Guidance for Antibiotic Use in Food Animals