Federal and state officials recently announced a plan for the distribution of millions of dollars in disaster assistance for New England fishermen who depend on cod and other bottom dwelling groundfish. But some of these same regional officials are considering a proposal that threatens to make things worse by cutting back habitat protections for depleted groundfish species.

In 2012 Acting Commerce Secretary Rebecca Blank declared a disaster after declines in the populations of groundfish forced sharp cuts in the allowable catch. A resulting framework agreement announced last Wednesday by regional officials at the National Oceanic and Atmospheric Administration's fisheries service, or NOAA Fisheries, would divide nearly $33 million in federal disaster assistance to six states. Massachusetts—home to most of the region’s groundfish fleet—would take the lion’s share of the disaster money. Fishermen who qualify would be eligible for direct relief and various state programs would receive grants. A vessel “buy back” program is also in development.

As these taxpayer dollars are being distributed, it is important that fisheries managers take a hard look at how this disaster came about, and how another one can be avoided—because New England has been in this situation before and could well be again.

Twenty years ago Commerce Secretary Ron Brown declared a disaster for groundfish after overfishing pushed cod and other populations to historic lows. Unfortunately, for most of the past two decades the New England Fishery Management Council, which works with NOAA Fisheries to regulate fishing in federal waters in the region, did not do enough to correct the situation. The council failed to rein in overfishing, postponed the adoption of science-based catch limits, and opted for weak rebuilding plans for overfished species. As a result, New England’s once-famous cod are still struggling to recover (see graphic). 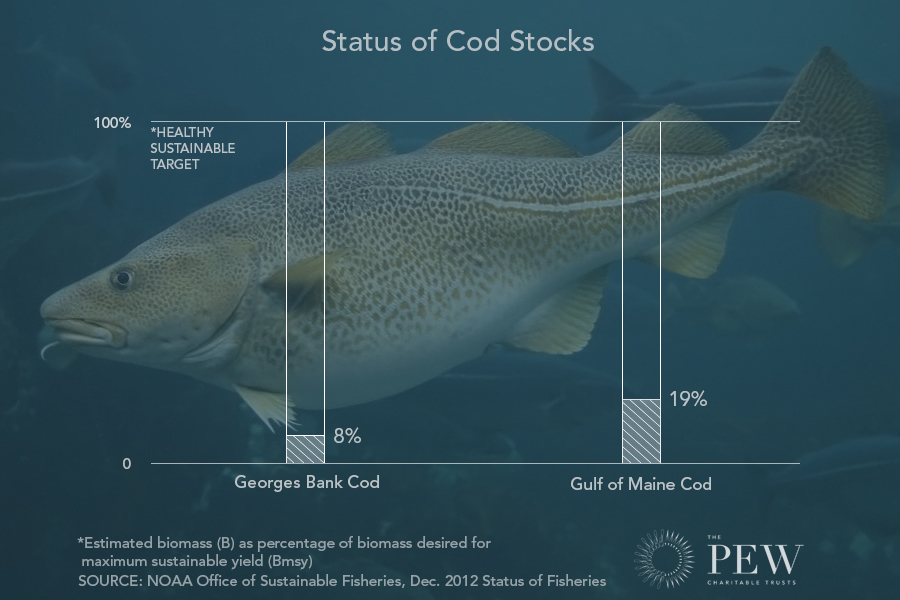 While some in the fishing industry say catch limits have caused their current problems, the data show that fishermen have often not been able to find enough cod to fill their quotas. And New England has the unfortunate distinction of having the most overfished populations of any fishery management region in the country.

Scientists say that one of the best ways to help cod and other depleted fish bounce back is to protect their habitat. Fish need places where they can find shelter and food, spawn, and grow. Habitat is where fish make more fish. And what New England needs is more fish.

The New England Fishery Management Council is working currently on a long-overdue revision to its plan for fish habitat protection and, unfortunately, it appears to be heading in the wrong direction. Industry-supported proposals before the council could slash the amount of marine habitat protected in New England by some 70 percent.

If this proposal prevails, we could be on a course to need continued disaster relief, even before this money is spent. Council members should instead stick to a strong, science-based approach to protect habitat for depleted New England fish populations. In the midst of one fishing disaster, New England officials shouldn't sow the seeds for another one.