Ten years of work by the Doña Ana County community in southern New Mexico culminated in today's designation to safeguard this local treasure at the crossroads of New Mexico and American history. New Mexico Senators Tom Udall and Martin Heinrich and former Senator Jeff Bingaman had previously introduced legislation to conserve the Organ Mountains-Desert Peaks area. However, when their measure stalled in Congress, they joined the local community in asking President Obama to designate the monument. 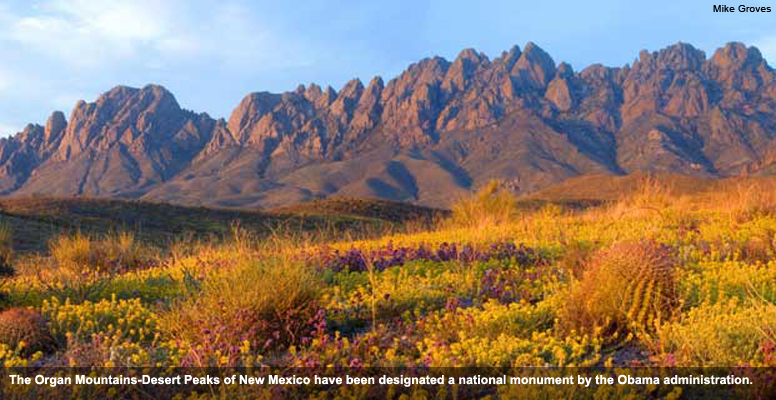 The Organ Mountains-Desert Peaks of New Mexico have been designated a national monument by the Obama Administration.

In a news release, Joshua S. Reichert, executive vice president who oversees environmental projects at Pew, said, “The American people have been given a spectacular natural gift with the designation of the Organ Mountains-Desert Peaks National Monument. … The area contains naturally and culturally significant features that are worthy of national recognition.”

The Organ Mountains-Desert Peaks National Monument is the latest achievement in a landmark year for conservation. Starting with his State of the Union address, President Obama pledged to protect America's public lands for future generations. By early March, the U.S. House of Representatives finally broke the logjam of conservation bills by passing the Sleeping Bear Dunes National Lakeshore Conservation and Recreation Act that preserved 32,500 acres of wilderness in Michigan. In the same month, the president used the Antiquities Act to designate the Point Arena-Stornetta addition to the California Coastal National Monument. And today, we celebrate the designation of the Organ Mountains-Desert Peaks National Monument.

This year, the 50th anniversary of the Wilderness Act, Pew will continue to work with Congress and the Obama administration to protect and expand America's natural legacy by conserving places such as the San Gabriel Mountains outside Los Angeles, the Boulder-White Clouds area in Idaho, and the Cherokee National Forest in Tennessee.