(UPDATED 6/3/2014 to correct number of states with tax revenue above peak—before adjusting for inflation—to 37, not 35.)

Nationally, total state tax revenue has recovered from its plunge during the Great Recession, thanks to factors such as North Dakota’s oil boom and tax increases in Illinois, California, and elsewhere. But the recovery is uneven. Tax collections in 26 states had not fully rebounded by the final quarter of 2013, after adjusting for inflation. 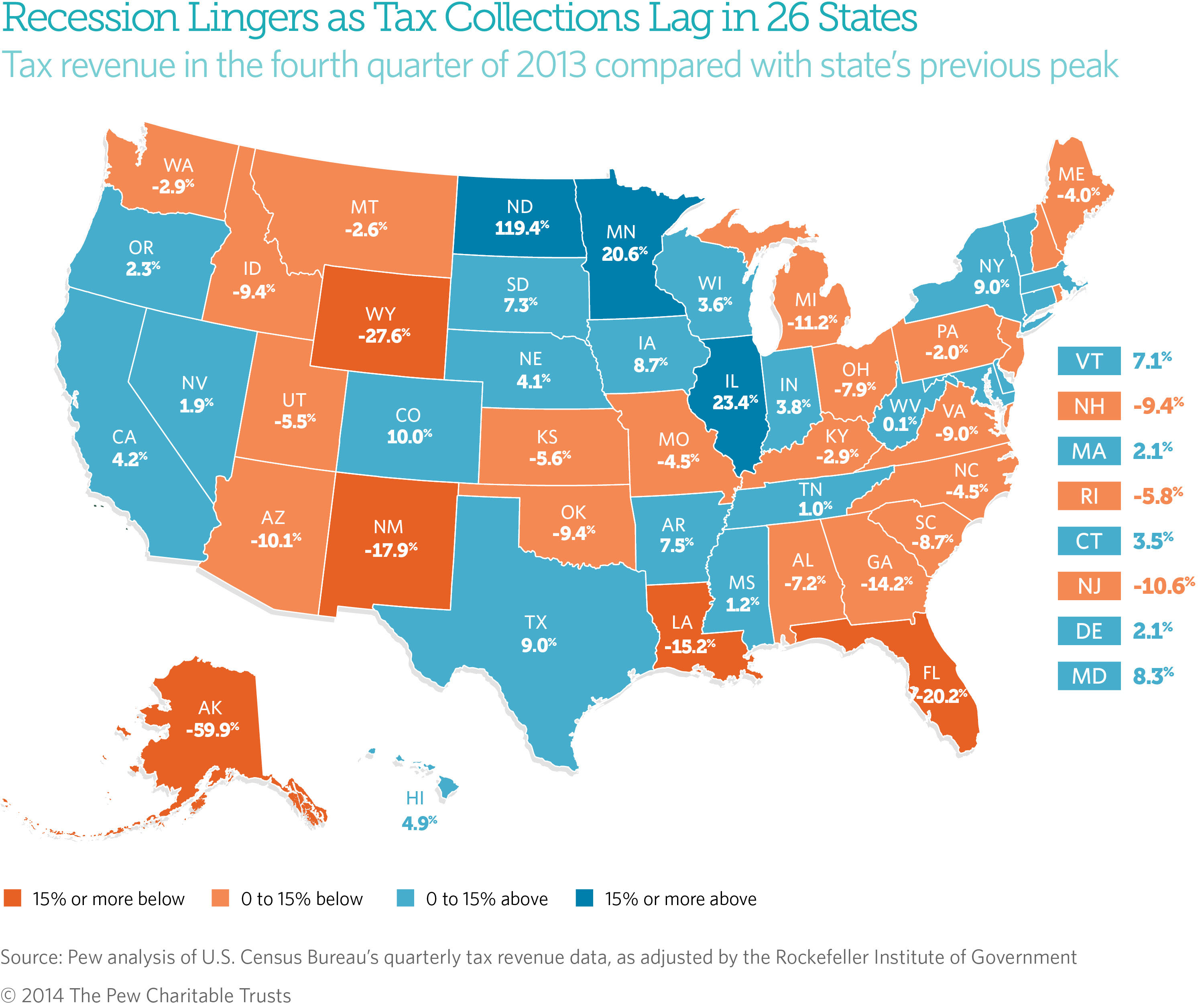 Leading the list of 24 states where tax revenue had bounced back by the end of 2013 were North Dakota (nearly 120 percent above its peak), Illinois (23.4), and Minnesota (20.6). But recovery to peak levels does not necessarily signal an economic comeback, because growth also can result from tax or policy changes. More than half of the states taking in more tax dollars than at their inflation-adjusted peak increased taxes since the start of the recession.

Tax revenue is one measure tracked by The Pew Charitable Trusts’ Fiscal 50: State Trends and Analysis to assess state fiscal health. Fiscal 50 compares the latest quarterly tax data with each state’s previous tax peak, adjusted for inflation, to gauge the fiscal stress still weighing on state budgets since the Great Recession, which lasted from December 2007 to June 2009.

What is the overall trend?

Combined tax revenue for the 50 states has risen for 16 straight quarters. That growth follows five quarters of sharp declines—to as much as 13 percent below peak at the end of 2009—that resulted in multibillion-dollar budget gaps. Despite steady tax revenue growth, not until the second quarter of last year (the end of fiscal year 2013 for most states) did states finally take in more combined tax dollars than they had almost five years earlier, or 0.8 percent more than at the previous peak after accounting for inflation. As of the final quarter of 2013, the states took in 2.2 percent more in total tax dollars than they did at their 2008 inflation-adjusted peak.

But recovery varied widely when viewed state by state. Every state experienced a drop in tax revenue in the wake of the recession, but some saw less of a fall and recovered more quickly than others. By the end of 2010, North Dakota was the only state that had recovered, in inflation-adjusted tax dollars. A year later, tax receipts were above peak in nine states; at the end of 2012, 17 states; and at the end of 2013, 24 states.

Even with recovery of their tax revenue level, combined the 50 states have the equivalent of just 2 cents more in purchasing power now for every $1 they collected at their 2008 peak. That leaves little extra to make up for cuts in federal aid and to pay costs associated with population increases, growth in Medicaid enrollment, deferred needs, and accumulated debts. For example:

As of the fourth quarter of 2013, compared with each state’s peak:

States with the greatest recovery

States with the least recovery

Even when tax revenues bounce back, policymakers will face challenges because of competing demands that piled up during the recession. Getting back to peak returns states only to where they were in purchasing power years earlier, leaving little money available to start making up for investments and spending they postponed during the downturn.

Analyzing partial data for the first three months of 2014, the Nelson A. Rockefeller Institute of Government at the State University of New York found the weakest growth in state tax revenue since early 2010, with declines in personal income taxes possible in some states and unexpected softness in sales tax collections as well. In April, the deadline for federal and most state income tax returns, revenue forecasters in several states, including Connecticut, Kansas, Massachusetts, New Jersey, and North Carolina, were unpleasantly surprised with lower-than-expected collections. States may be seeing a drop partly because some taxpayers claimed capital gains in fiscal 2012 to avoid a federal rate increase the next year, leading to a one-time bounce in tax receipts.

Using U.S. Census Bureau data that had been updated by the Rockefeller Institute, Pew adjusted for inflation and averaged dollars across four quarters to account for seasonal variation. Adjusting for inflation is just one way to evaluate state tax revenue growth. Different insights would be gained by tracking revenue relative to population growth or state economic output.

The latest data are subject to revision but are useful in comparing trends among the 50 states. (See methodology.)