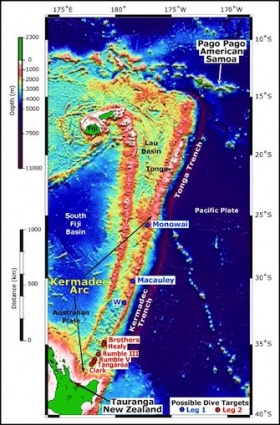 ABOARD THE R/V THOMAS G. THOMPSON—On the scale of the Pacific Ocean, the Kermadec Trench looks like a thin line snaking down from southwest to northeast just off the northeastern tip of New Zealand’s North Island. But when you zoom in and look even at the coarse detail that the ship’s multi-beam sonar can reveal, you see features that, unless you fly airplanes for a living, exceed the scale and grandeur of anyone’s daily experience. Then you overlay the line marking a typical mile-long Nereus transect and you have to zoom in even further to make it something other than just a dot on the map.

The trench reaches a depth of 10,047 meters and there is no way to grasp the enormity and complexity of what’s down there because there is nothing up here with which to compare it. And we only have pinpricks of images and samples on which to hang our language and ideas to describe it. Yet scientists have only recently been able to peel back some of the overlaying depths to paint in the broadest strokes an image of life in the deep, life that shares the planet with us, and how it is able to survive on a part of the planet that is so alien to us. Part of the reason they are able to do so is because of the development of tools likeNereus. 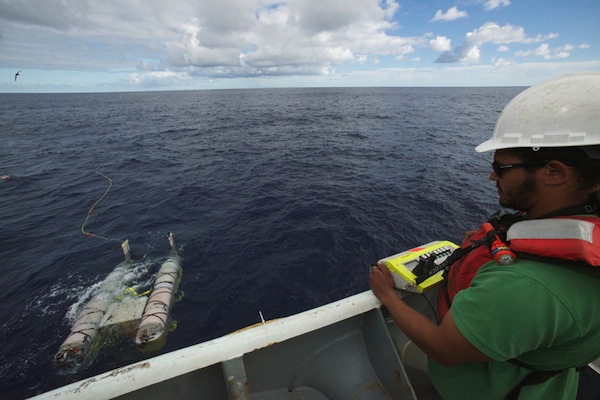 Nereus went to 7,000 meters today and took almost eight hours to get down and back. In the additional eight hours it spent on the seafloor, scientists watching rapt through a bank of monitors on the ship collected 16 sediment cores, specimens of seven organisms, and hours of ultra high-definition video that will be poured over for months or years to come. And yet it only traveled one kilometer along a feature that is more than one thousand kilometers long and contains countless small habitats, cracks and crevasses where things could hide and almost certainly are hiding. Still, the sediment samples will almost certainly tell us something about the diversity of microbial life in the Kermadec, the animals collected will help quantify how much carbon is taken up by hadal organisms or how proteins manage to fold correctly under adverse conditions, and the imagery will give hard data about the sheer abundance and diversity of things living on what was once thought to be a barren seafloor. 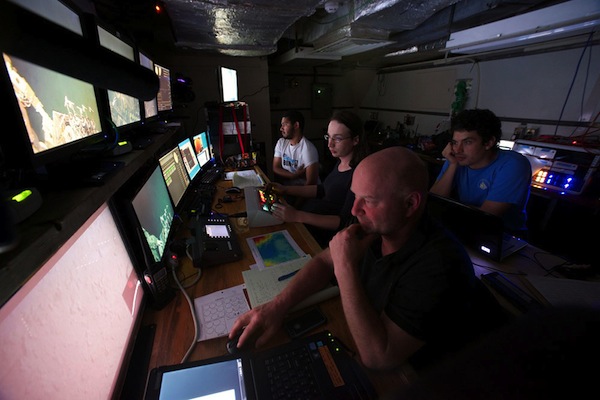 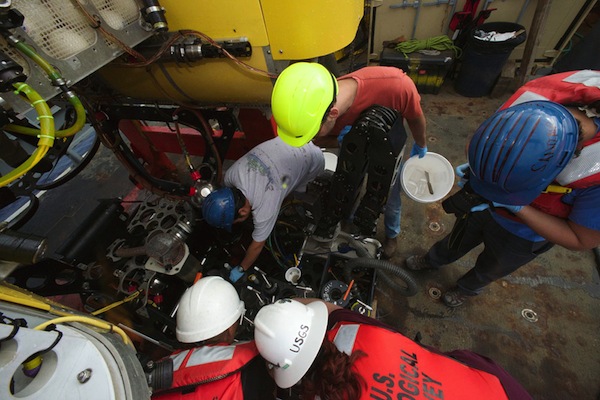 Once Nereus is safely on deck, a scrum of scientists collects samples from the vehicle's payload basket. (Photo by Ken Kostel, Woods Hole Oceanographic Institution)

“The small number of samples we have beginning in the 1950s changed the way we think about trenches,” said Tim Shank, a biologist from the Woods Hole Oceanographic Institution and chief scientist on this National Science Foundation-funded mission. “I’m not surprised if I get surprised anymore about life in the deep sea. And I don’t think I’ve seen even the beginning of what’s down there.”

We had a pleasant surprise yesterday, as well, when the hadal lander came back and a first look at the video elicited groans from the Aberdeen group because the baited pole was hanging over the edge of a small cliff. In the past, such a placement would mean hours of nothing on video because snailfish, the one fish species found at that depth, essentially pass out if they expend too much energy and so spend all their time moving languidly along the seafloor.

Partway into the collection of one-minute video clips, however, a snailfish could be seen doing something it had never been seen to do before: swim up. In an instant, the conception of the snailfish as a purely benthic species was rewritten. 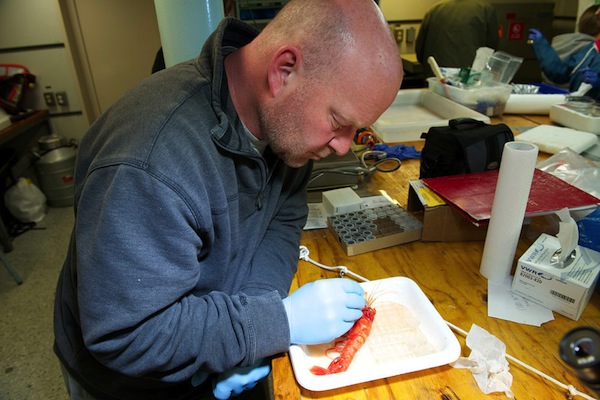 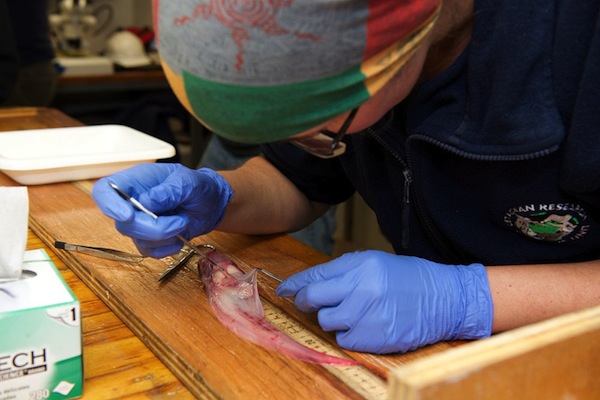 This is puzzling because theoretically fish shouldn’t be able to survive deeper than about 8,500 meters, and if they can swim up in the water column they might just decide to migrate deeper at some point to take advantage of the food and habitat down there. But at some point beyond that depth the difference in osmotic pressure between fish cells and seawater flips, meaning that the cellular physiology in fish would have to change in order to expel water rather than keep it in. Some marine fish can do this (think of salmon returning from the ocean to spawn), but they take time for their physiology to reboot and they have evolved the mechanism to do so.

And all this because the lander accidentally found itself perched on the edge of a cliff! What would researchers have found if the lander had been turned the other way or if Nereus had gone a different direction on one of its transects? Something even more amazing? More of what we already know? Nothing at all? It would be easy to become paralyzed by the size of our efforts in relation to the enormity of the trench and the challenges it takes to get there. The key is to not think of all the missed opportunities or random chances, but rather to focus on the data that’s come in because we are making the effort and on the much richer, more detailed picture that will be drawn of life on Earth if we continue to explore this massive, unexplored ecosystem.

“I think as a species if we’re toing to think about life on this planet and what it takes to survive on our planet, we better understand what’s going on in trenches,” said Shank.

This article was originally published by Scientific American (with video).