Nearly five years after the Great Recession officially ended in June 2009, states’ financial conditions are improving. But most states have yet to return to prerecession performance on some key measures of fiscal health. Even after states overcome the effects of the downturn, additional challenges await them. 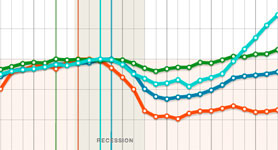 An examination of 50-state data in The Pew Charitable Trusts’ Fiscal 50: State Trends and Analysis, an online resource, shows that recovery varies widely from state to state. Tax revenue, employment rates, and reserve funds still are lower in a majority of states than they were before they plunged during the recession. While those measures are moving in the right direction, other pressures are building.

For some states, one challenge is unfunded pension and retiree health care costs for public workers. In 43 states, these long-term retirement obligations are larger than the public debt from bond issuances and other state borrowing.

An issue for all states is the prospect of further belt-tightening by the federal government, which provides nearly $1 in $3 of state revenue. Already, federal economic stimulus aid, which boosted the federal share of state revenue to its highest levels in at least 50 years between fiscal years 2009 and 2012, has largely ended.

Why does state fiscal health matter?

All of these factors affect the fiscal health of state governments, which deliver critical services such as health care for the needy, education, transportation, and public safety. State finances also matter because of their impact on the U.S. economy. State spending accounts for 4 percent of the nation’s economic output, and states provide about one-third of local governments’ budgets.

Pew’s Fiscal 50 provides sortable 50-state data and analysis on key fiscal, economic, and demographic indicators that affect states’ fiscal health. Updated regularly, this online resource highlights trends, allows 50-state comparisons, and offers unique insights into the finances of state governments. Each indicator drills down into one of five core areas: revenue, spending, economy and people, long-term costs, and fiscal policy. Fiscal 50 is selective rather than comprehensive in choosing indicators. Each indicator is designed with states’ long-term financial well-being in mind, rather than the short-term perspective of what it takes to balance the budget each year.

For most indicators, Fiscal 50 allows users to compare their states with others and to a national benchmark, providing insights and perhaps raising questions in state capitals about why states lead or trail their peers. This resource will be updated when new data are available, and more indicators and analysis will be added.

Fiscal 50 builds on data from the 50 states obtained from U.S. government agencies, the Nelson A. Rockefeller Institute of Government, the National Association of State Budget Officers, the National Governors Association, and Pew’s research. Differences can be expected between certain fiscal data used in this analysis and data compiled and used by states for their own budgeting purposes. Data featured in Fiscal 50 are the best available for drawing fair comparisons across states.