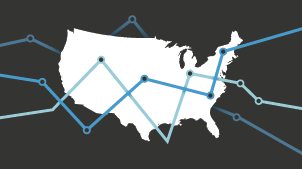 The share of states’ revenue coming from the federal government surged in the wake of the Great Recession and then fell as federal stimulus funds expired and state tax revenue recovered. In fiscal year 2012, federal dollars made up 31.6 percent of 50-state revenue—below peak but still historically high.

After helping fill gaps in state budgets for three years, federal stimulus aid largely ended by fiscal 2012. Yet even with the sharp drop, federal dollars as a share of state revenue remained historically high for the fourth year in a row. Download the data.

The federal share peaked at 35.5 percent in fiscal 2010 and was 34.7 percent in fiscal 2011. Overall, the federal government has provided about one-quarter to just under one-third of states’ money, according to data dating back to 1961. States use federal dollars for a range of programs, particularly health care, education and training, and transportation and other infrastructure.

The decline in the federal share since fiscal 2010 was due to both the phaseout of federal stimulus dollars and increases in states’ own revenue. Changes in either revenue source affect the ratio of federal to total dollars.

The federal share of state revenue fell in every state but one—Oregon—between fiscal 2010 and 2012. Still, the level was higher than or equal to the 10-year prerecession average in all but five states: Alaska, Kansas, New York, North Dakota, and Wyoming.

Federal shares vary across the country:

The federal share of state revenue indicator measures the combined effects of swings in state and federal funding. A higher or lower percentage does not necessarily indicate a problem for state budgets. Between fiscal 2010 and 2012, for example, levels dropped largely because states’ own funds generally increased while their federal funds generally decreased. But for some states, a decline could spell budget challenges if the states lose federal funds before their own revenues have fully recovered.