April 20, 2014, marks the four-year anniversary of the worst oil spill in U.S. history. Despite the best efforts of emergency responders, conclusive evidence shows that the oil spill harmed bluefin tuna and other wildlife in the Gulf of Mexico.

The science is in: The Deepwater Horizon oil spill hurt and killed bluefin tuna

New studies by the National Oceanic and Atmospheric Administration's Fisheries Service and Stanford University (one published in February, the other in March) illustrate that the Deepwater Horizon disaster had direct negative impacts on depleted western Atlantic bluefin tuna. These fish were already suffering from decades of overfishing, exacerbated by the incidental catch from commercial surface longline fishing in the Gulf. The spill ultimately covered approximately 20 percent of the tuna's only known spawning area and persisted through the peak of its spawning season. This could affect the reproductive potential of the bluefin for decades. The studies showed that the oil affected yellowfin tuna and amberjack, too. Commercial fishermen in the Gulf were also hit hard by closures in the spill area and fish kills. 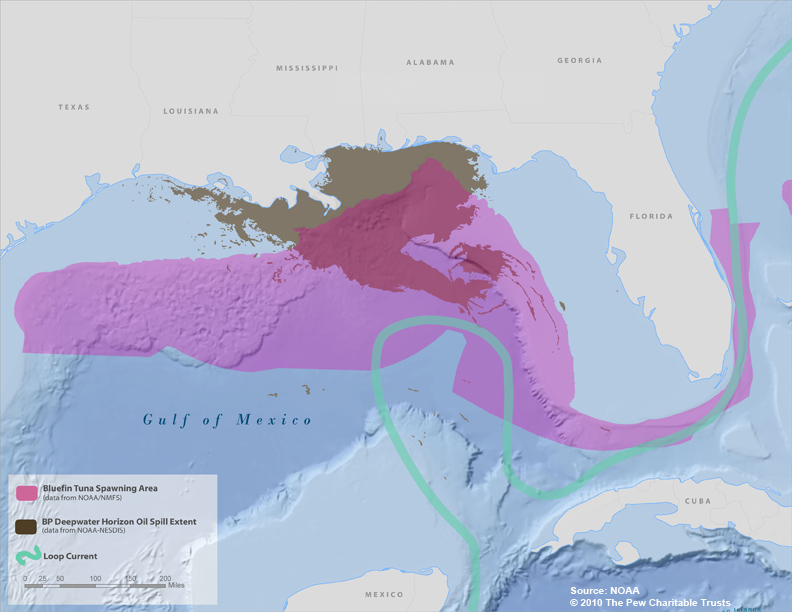 Real solutions are close at hand

One way to improve the reproduction of bluefin tuna is to limit the number of spawning fish that are killed in the Gulf of Mexico. Fortunately, NOAA Fisheries is developing new bluefin tuna regulations (due out this summer) that could restrict the use of surface longlines and encourage more selective fishing methods. Many of the agency's proposed management measures are a step in the right direction, but some changes are needed.

As proposed, the regulations would establish a gear restricted area in the northwestern Gulf, where surface longlines would be prohibited in April and May. Highly selective alternative equipment—such as greensticks and buoy gear—would be allowed, however. Although this change would stop some of the waste of bluefin tuna, NOAA Fisheries should expand the protected area to include the entire Gulf during the peak of bluefin spawning, March through May.

NOAA Fisheries can help surface longline fishermen make the transition to the new highly selective gears, which will allow them to maintain access to their target catch during times when surface longlines are prohibited. The alternative equipment would permit the vessels to fish for their targets, yellowfin tuna and swordfish, without harming bluefin tuna in the Gulf to spawn. The agency also could use restoration money from the Deepwater Horizon spill to assist the commercial fishermen as they switch to these new methods of fishing. Greensticks and buoy gear would help protect bluefin and other nontarget ocean wildlife, such as endangered leatherback sea turtles and depleted blue marlin.

The agency has a unique opportunity to help protect bluefin tuna and support Gulf commercial fishermen in the wake of one of our nation's worst environmental disasters. NOAA Fisheries can show its commitment to both by issuing a strong final bluefin rule and making use of the restoration funds for the gear transition project.