President Barack Obama released a $3.9 trillion fiscal year 2015 budget on March 4. The budget proposal, which will need congressional approval before becoming law, increases spending in many sectors including energy ($27.9 billion) and education ($68.6 billion). 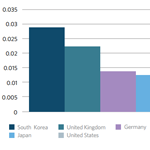 Other priorities in the president’s budget include a $29 million investment in FDA monitoring and research on antimicrobial resistance and antimicrobial drug use practices. See how Pew’s human health and industrial farming initiative is working to preserve the effectiveness of antibiotics.

The president’s 2015 proposed budget would also provide a 2.6% funding increase from last year’s budget to pump $27.9 billion in discretionary funds into Department of Energy initiatives to advance U.S. energy security and manufacturing. Out of the total spending on energy initiatives, $4.2 billion would go toward programs to spur innovation in the energy sector, the third-largest sector of the American economy.

The $35 million requested in the President's budget builds on the support that Congress has shown over the past two years and is a critical step in continuing to catalyze improvements.Jessica Donze Black, director, Pew’s kids' safe and healthful foods project

This additional energy funding is intended to make the United States competitive in the global clean energy marketplace and manufacturing sector, ramping up efforts to create 45 manufacturing innovation institutes in the next 10 years. Learn how clean energy technologies can help secure our economic future from this recent clean energy program report, “Innovate, Manufacture, Compete: A Clean Energy Action Plan.”

Pew previously commended the Obama administration’s renewable energy goals and his executive order stipulating that 20 percent of the electricity used by the federal government be from renewable sources by 2020.

And government agencies are taking note.

They have already begun to invest in clean energy, not only to create jobs, but also as a matter of national security. The U.S. military, which incurs a $4 billion energy bill annually to operate its bases, has led the way in clean energy initiatives.

A recent Pew report, “Power Surge: Energy Security and the Department of Defense,” highlights actions by the Pentagon to secure technologies that conserve energy, enable on-site production of renewable resources, and save taxpayers millions of dollars. View the infographic.

The president’s proposed budget for fiscal 2015 also includes $23.7 billion in discretionary resources for the Department of Agriculture to invest in rural communities, energy advancement, and food and nutritional services. Of this, $35 million would go toward school equipment grants, as the administration continues to support the Healthy, Hunger-Free Kids Act of 2010.

Currently, only 1 in 10 school districts nationwide (12 percent) have all the kitchen equipment necessary to make healthy school meals for students, according to a report by Pew’s Kids’ Safe and Healthful Foods project.

The equipment grants would help schools serve meals that meet the USDA’s new nutrition standards. See how some schools, such as public schools in California, are finding ways to provide healthy school meals even though they lack the right equipment.

Nationally, at least one or more of the schools in more than half of the education districts surveyed will need an overhaul of their kitchen infrastructure, according to Pew’s report. It recommended that federal, state, and local governments make funding available to help schools improve their kitchens.

Many of the other sectors included in the president’s budget proposal have been the focus of ongoing research by Pew, including: