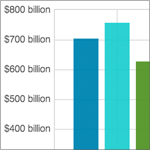 States commit to future spending both when they borrow and when they fall short of funding the cost of retirement benefits for their public employees. As of fiscal year 2012, the largest of these long-term obligations was unfunded pension liabilities in 35 states, unfunded retiree health care costs in seven states, and public debt in eight states.

States take on these obligations, which are paid over decades, for different reasons. Sometimes a state borrows to build infrastructure projects that deliver services for years in the future and may spur economic growth. When the bill comes due, states usually cover these debt obligations before other expenses. In other instances, a state creates unfunded liabilities when it sets aside less than is needed to cover the full retirement costs for public services already performed, shifting those expenses to future taxpayers. Download the data.

This snapshot found that, as of fiscal 2012:

These claims on future revenue put pressure on state finances, potentially affecting borrowing costs, credit ratings, and funds available for other priorities—such as education or health care. However, the degree of fiscal challenge varies depending on the size of a state’s budget, economy, and population, and on the type of liability. States with faster-growing economies may find their obligations more manageable. States also may be able to cut certain costs over time by refinancing debt or modifying retiree health benefits, which in some places may have fewer legal protections than pensions do.

Besides debt and unfunded retirement costs, states also face other long-term budget pressures, such as expenses for deferred maintenance and upgrades to infrastructure.