After the Great Recession ended, total spending by state governments hit its highest level as a share of the economy in at least 20 years. Federal funds drove the growth, as spending from states’ own dollars shrank relative to the economy. 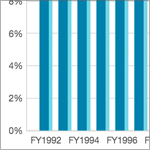 States collectively hit their peak in total spending in fiscal 2010 and 2011, the same years they got their largest doses of temporary economic stimulus aid from the federal government. But federal funds have played a key role in supporting state spending for far longer.

In fiscal 2011 Arizona spent less of its own funds than at any time since at least 1961, and Florida’s state-sourced spending was at its lowest level since 1986.

States fell into one of three categories

State highlights based on spending as a share of the economy:

The broad measure of state spending used here captures far more than general fund budgets. State-sourced spending includes all expenditures approved by legislatures, including the annual costs of multiyear commitments, and spending by related units of state government. The measure also includes spending of federal revenue, over which state policymakers may have less control. Because change in state spending as a share of the economy reflects both spending and economic performance, changes in either factor affect the ratio. For example, an increase could mean spending is rising faster than personal income or it could mean spending is stable and the economy is faltering.