The deep gorges and canyon walls of the Owyhee River are the heart of this wild landscape, which led the New York Times to proclaim the area, “Oregon's Grand Canyon.” The deepest part of the Owyhee Canyonlands, Iron Point, has sheer walls extending hundreds of feet above the river, revealing a beautiful mosaic of basalt, rhyolite, volcanic ash, and sediment.

This ecosystem, one of the most expansive and dramatic in the West, features rare plant and wildlife species, pristine waterways (186 miles of the Owyhee are designated a Wild and Scenic Waterway), and incredible outdoor recreational opportunities. Millions of years of volcanism, earth shifting, and erosion have carved this landscape, creating distinct microhabitats for a diverse array of flora and fauna.

The Owyhee's distinctive hydrology, geology, and soils support a range of plant life, including one of the largest remaining expanses of high quality sagebrush habitat in the West. In fact, it is estimated that at least 28 plant types are indigenous to the Owyhee desert. 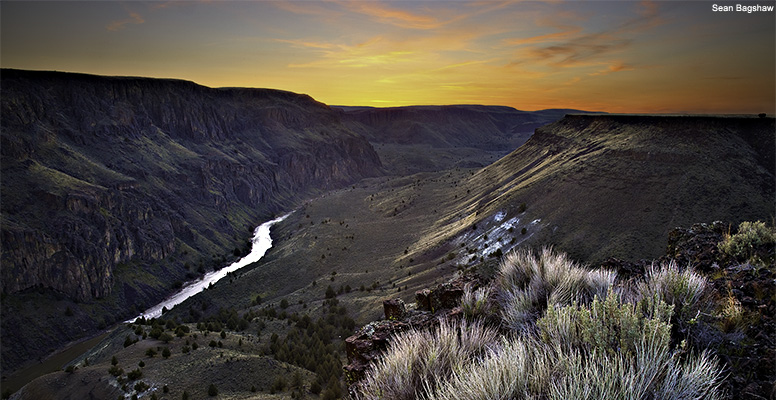 More than 200 species of wildlife make their home in the vast Owyhee ecosystem, including North America's largest herd of California bighorn sheep. It also supports pronghorn antelope, Rocky Mountain elk, mule deer, bats, sage grouse, redband trout, longnose snakes, and pygmy rabbits. While the Greater Sage-Grouse historically thrived in the West, the birds have experienced a steady decline due to impacts from development, off-road vehicle use, and cattle grazing. Protecting the expansive sagebrush habitat of the Owyhee Canyonlands is crucial for their survival.

Many are drawn to the Owyhee desert for the numerous recreational opportunities that abound. Rafters and kayakers jump at the opportunity to experience the Class II to Class V+ rapids on the pristine Owyhee River, and view petroglyphs carved into the steep canyon walls. Hikers and backpackers can explore the unique geologic formations or vast expanses of uninterrupted terrain. Hunters who secure one of the coveted tags to hunt California bighorn sheep can enjoy a once-in-a-lifetime opportunity. Tourism and recreation are a vital part of the local economy, with over $9 million spent by hunters, anglers, and visitors in 2008 alone.

Evidence of human habitation is strewn throughout the Owyhee Canyonlands, yet the area today remains much the way it has always been. For at least 10,000 years, the Owyhee was inhabited by semi-nomadic hunters and gatherers who are ancestors to the modern day Northern Pauite, Bannock and Shoshone tribes. There are more than 500 known archaeological sites scattered throughout the area, often hidden in its canyons. Archaeologists have unearthed weapons and stone tools made of various materials including obsidian, agate, and jasper. They speculate that the numerous white etchings along the black basalt might have had shamanistic purposes or been a way to conjure hunting magic.

Despite its majestic beauty, Oregon's Owyhee Canyonlands remain unprotected and subject to threats from off-road vehicle use and the proliferation of non-native species. It is time to change that.

With more than 1.9 million acres of wilderness-quality lands, Oregon's Owyhee Canyonlands represents the largest conservation opportunity remaining in the lower forty eight.  The Pew Charitable Trusts and its partner, the Oregon Natural Desert Association (ONDA), are working to preserve the Owyhee River and its desert landscapes to ensure that future generations will find the same beauty and solitude that we experience today.