Chichagof Island, part of the Tongass National Forest in southeastern Alaska, is home to 1,550 brown bears and 1,159 people. Brown bears officially outnumber residents of the villages of Elfin Cove, Hoonah, Pelican, and Tenakee Springs—the only communities on the nation's fifth-largest island. How many places in the United States does that happen?

Chichagof Island and adjacent islands have the highest concentration of brown bears in the Tongass, nearly two per square mile. According to a report by the state's Department of Fish and Game:

Last month, I kayaked the waters of the West Chichagof-Yakobi Wilderness for eight days with my good friend Jay Nelson. We started paddling in Slocum Arm on the southern end of the 265,000-acre wilderness, and on the first day we spied a large brown bear feeding on a grassy beach in Waterfall Cove. A few days later we had the good fortune to see a sow and her two cubs. While we never saw any human footprints except our own, throughout the trip, at every camp we made and every cove where we stopped for lunch, we saw bear tracks and piles of scat on the gravel beaches or in the intertidal sedges, even on the small islands. We saw goose-tongue plants that had been grazed by these large omnivores, foraging a meal this time of year before the salmon have started their upriver runs to spawn.

The brown bears were a treat, but we saw much more—all of it with boyish wonder in our eyes. Marine mammals abound in these waters, both the sheltered bays and the open ocean. Harbor seals poked their heads out of the water near our boats to check us out. Sea otters floated on their backs and we could hear cracking sounds as they broke open clams or mussels, sea urchins or abalones, to feast upon. One day we observed a couple of humpback whales making their way up Smooth and Ogden passages, feeding while we paddled a parallel course to the east past Elbow Passage. We watched a tail twice the size of our kayaks come out of the water and dip back in. We saw them burst straight from the surface after they had blown a virtual net of bubbles to trap schools of small fish, then splash back down in a roiling crash of whitewater, with the expanded pleats of their throats probably full of herring or smelt. 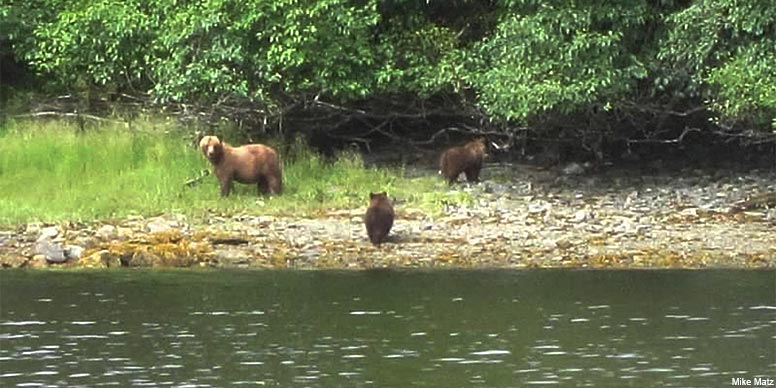 If you haven't visited a designated wilderness this summer, don't let the season pass by without doing so. You don't need to go to Alaska. Visit wilderness.net and find a place nearby. Getting out, away from phones and computers, even for a few days, is worth it.

It did Jay and me a world of good to be in the West Chichagof-Yakobi Islands Wilderness, which has been permanently protected since 1980 when Congress passed and President Jimmy Carter signed the Alaska National Interest Lands Conservation Act. It'll be there as prime habitat for the next generation of brown bears and as boating waters for the next generation of kayakers. It'll be there forever, just as it is. That's the beauty and essence of the original 1964 Wilderness Act and the National Wilderness Preservation System it established.