The fog is thick. We cannot see our destination, the Punuk Islands, three rocky lumps a few miles east of the much larger St. Lawrence Island in the northern Bering Sea. So we resort to the age-old methods of listening for waves breaking on a shore and watching puffins, cormorants, and murres to see where they are heading. The sounds and the birds both confirm that we are on the right track, perhaps a mile away. Perry Pungowiyi, our guide, starts his outboard engine again, and our 18-foot skiff is once more underway. 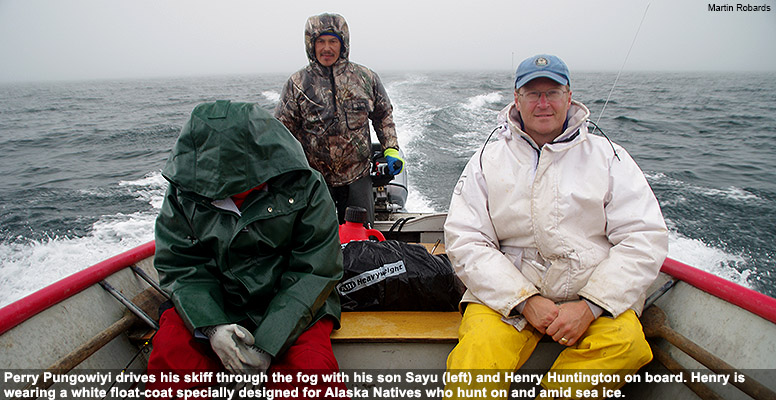 Martin Robards, from the Wildlife Conservation Society, and I are here to better understand how increased commercial shipping will affect the wildlife and people of this region. The St. Lawrence Island Yupik have lived here for millennia, the knolls of old house sites and middens (mounds of shells, bones, and other refuse at old settlements) dotting the coastline of the 100-mile-long island. On the Punuk Islands, the bones of whales and walruses sit on the tundra, leaving no doubt as to how people live on a treeless island that is icebound half the year. 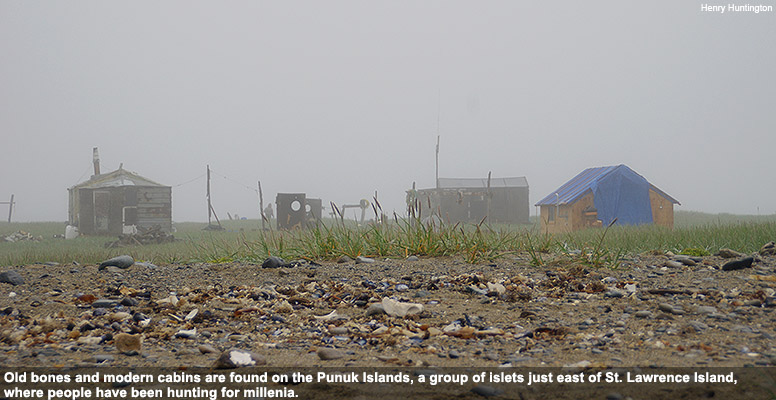 The rapid loss of Arctic summer sea ice is leading to an increase in northern shipping traffic. The Bering Strait is the bottleneck between the Pacific and Arctic oceans, and St. Lawrence Island sits just south of the strait, right in the path of the vessels heading from Europe to East Asia, or from northern Alaska to southern destinations. 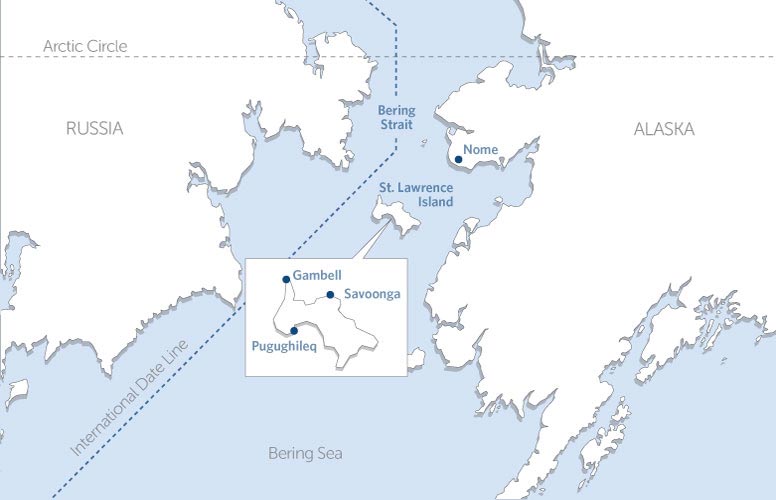 For hunters who rely on the sea, the presence of oil tankers and cargo vessels is a new worry, both for the health of the ocean and for the safety of people in 18-foot motorboats far from land, with or without heavy fog. One idea to improve safety comes from the Marine Exchange of Alaska. The nonprofit organization, established in 2000 to serve the Alaska maritime community, built and operates the Automatic Identification System, or AIS, comprising more than 100 receiver stations in Alaska that track ships plying Alaskan waters. 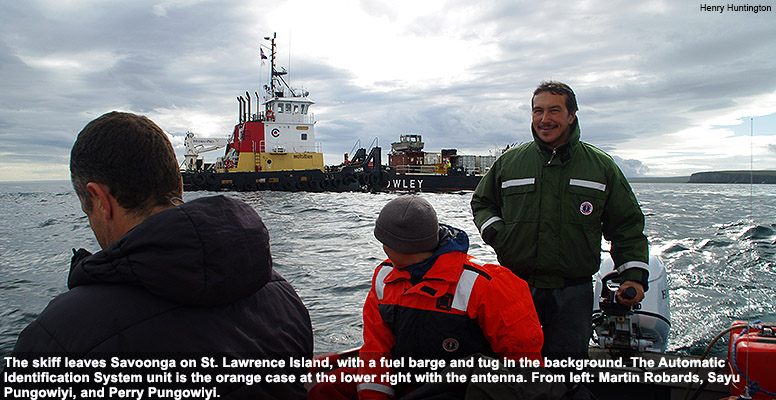 Most commercial vessels are required to have AIS transmitters, which can also be carried by small ones, such as Perry's skiff. The units are the size of a small briefcase, with a battery that will last for a few days and can be recharged with a solar panel or boat battery. Other vessels, as well as receiving stations on shore or satellites in space, can see where the AIS-equipped boats are, reducing the likelihood of collisions. Knowing where boats are can also help when rescue is needed, a fact that greatly appeals to the hunters, who may travel more 100 miles offshore, and their family members, who await their return. 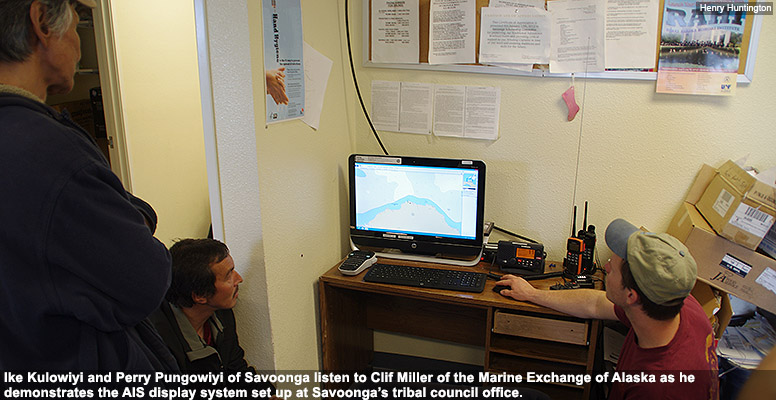 Traveling to the Punuk Islands, Martin and I are more than 60 miles from Savoonga on St. Lawrence Island, testing the range of the receiving station back in the village. Earlier we had gone west, toward the St. Lawrence Island village of Gambell, to deploy an underwater recording device that will pick up marine mammal sounds as well as noise from ships. Perry's wife liked being able to see where we were. Our AIS unit also has a satellite transmitter, so Martin's fiancée was able to call the Marine Exchange of Alaska office in Juneau to learn that we were three miles east of St. Lawrence Island (though she did not know about the fog). 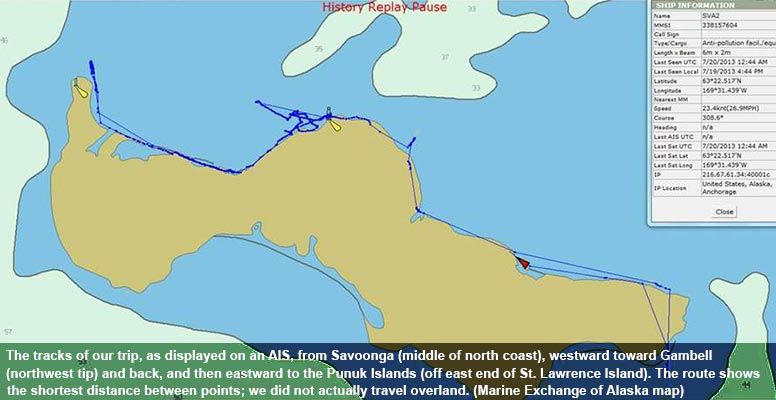 In addition to the villages of Gambell and Savoonga, each with about 700 people, St. Lawrence Island is home to countless seabirds. On the way back from the Punuks, we encounter miles-long rafts of crested and least auklets sitting on the sea surface. As our boat approaches, they take to the air, and I begin to understand how flocks of birds can blacken the sky. There are also colonies of murres, kittiwakes, puffins, and many other species along every shore-side cliff we pass. 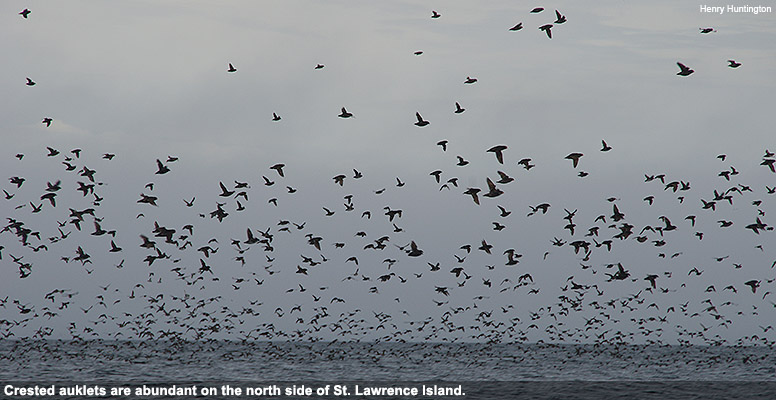 So much life also attracts predators, such as Arctic foxes, seagulls, and even one gyrfalcon, circling expectantly overhead. Later on, we find several yellow-billed loons, the largest and rarest of that family. 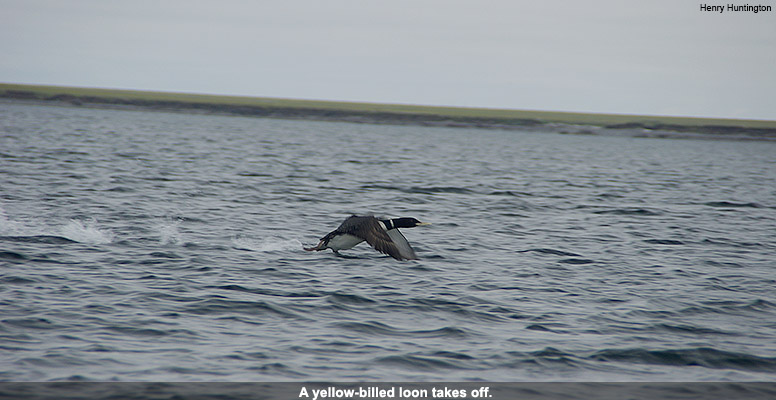 Although birds and eggs are popular food items, marine mammals are the main source of local food for St. Lawrence Islanders. The depth of walrus and whale bones at the old settlement sites shows that this has always been the case. Most hunting takes place in spring and fall as the animals migrate north to the Arctic. In midsummer, we see a few gray whales, some spotted seals, and one sea lion. The northern Bering Sea is home to Arctic species in winter and sub-Arctic species in summer, making it especially rich in both abundance and diversity of marine life. 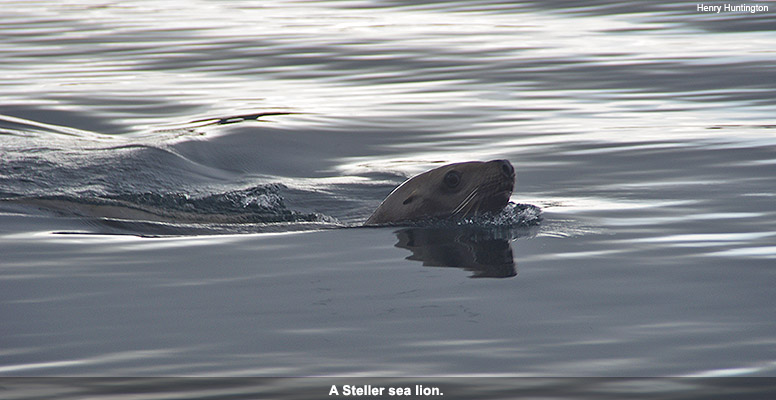 Commercial shipping poses a threat to this abundance, through disturbance of birds and mammals and potentially through an oil spill from a tanker or from the fuel oil of a cargo ship. Our work with the St. Lawrence Island Yupik and other peoples in the region will help us identify areas that ships should avoid, as well as other measures to promote safety and environmental well-being. These include the AIS system we are testing as well as speed restrictions, establishment of shipping lanes, and better charting. 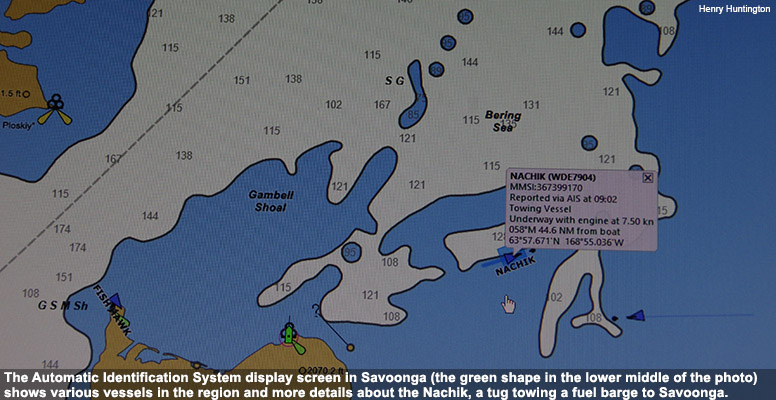 For now, watching puffins fly past in the fog, we are happy just to be on the water with friends, to enjoy the beauty of an area that few people see in person, and to remind ourselves of why it is important to conserve the sea and the way of life it supports.

Henry P. Huntington is a senior officer for The Pew Charitable Trusts, where he directs the science work of its Arctic programs.

Partners in the AIS project include the International Union for Conservation of Nature, the Marine Exchange of Alaska, the Oak Foundation, The Pew Charitable Trusts, the U.S. Arctic Research Commission, and the Wildlife Conservation Society.