Nearly 20 million voters experienced at least one problem when voting in the 2012 presidential election, according to the 2012 Survey of the Performance of American Elections. 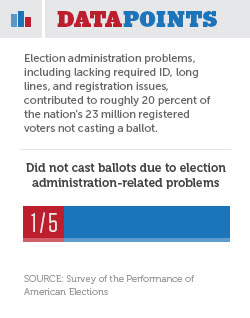 The survey, conducted by Charles Stewart III, Kenan Sahin distinguished professor of political science at the Massachusetts Institute of Technology, in partnership with The Pew Charitable Trusts, shows that the majority of these voters faced lines at the polls. Others encountered problems with voter registration, voting machines, or finding the correct polling place.

Additionally, an estimated 1 in 5 of the approximately 23 million registered voters did not cast ballots in part because of an election administration-related problem, including lacking required identification, long lines, or registration issues.