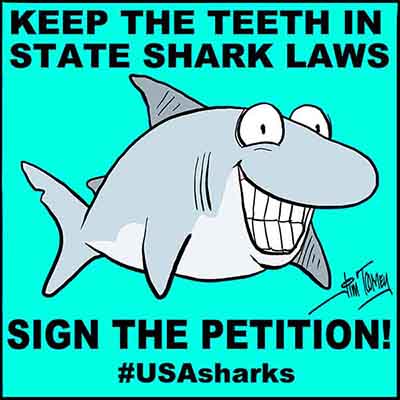 The United States' reputation as a world leader in shark conservation could be tarnished if a rule proposed by the Obama administration moves forward without changes.

The National Oceanic and Atmospheric Administration, or NOAA, is considering regulations to implement the Shark Conservation Act of 2010 that have the potential to overturn shark protections passed in 10 states and territories.

The federal legislation closed loopholes in the previous U.S. shark finning law by requiring that sharks on U.S. vessels or brought into U.S. ports have their fins still attached. To extend additional protections to sharks, some states and territories passed additional measures. In most cases, these laws ban the possession, sale, and trade of shark fins. Shark fins are used as a soup ingredient and can fetch up to $300 per pound.

But now NOAA says that certain state and territorial laws could interfere with the federal law and therefore would be preempted. Implementing the provisions of the shark conservation act, however should not be used to overturn legislation passed by other jurisdictions that provide greater protections for sharks.


A dozen shark attack survivors who work to save the ocean's top predator sent a letter to NOAA on June 27 asking the government not to take a big step backward in shark conservation.

“Any rules to implement the federal law that result in overturning more restrictive state or territorial laws could put already stressed shark populations at additional risk. As shark attack survivors, we are uniquely qualified and feel a personal responsibility to speak up for these animals,” they wrote. “Please do not weaken the intent of the Shark Conservation Act of 2010 by preempting and undermining shark fin bans of states and territories.”

In the last month, Pew, Oceana, the Humane Society, and Earthjustice generated over 100,000 individual comments to NOAA, asking the agency not to move forward with a proposed Shark Conservation Act of 2010 implementing rule that potentially could overturn shark protections passed in 10 states and territories.