In mid-July, representatives from 24 countries and the European Union will hold a special meeting to consider whether to create the world's largest marine reserves in waters off Antarctica. A compilation of the latest science on the proposals shows that these reserves would more than double the amount of protected area in the world's oceans.

A proposed reserve for Antarctica's Ross Sea, considered the most pristine marine region on Earth, would be the size of Alaska. Fishing and all other extractive activity would be prohibited there. At 1.6 million square kilometers (just over 600,000 square miles), it would nearly double the documented 2.2 million square kilometers (849,000 square miles) of fully protected ocean worldwide. 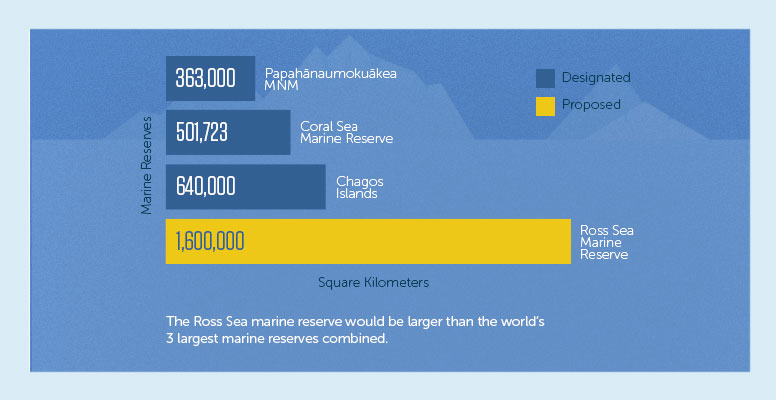 An additional 1.6 million square kilometers of marine protected areas proposed for the East Antarctic also could be designated. Although fishing would not be banned outright in the East Antarctic area, no fishing is taking place there, and any request to start would require international consensus.

“This could be the decision of the decade for our oceans,” said Andrea Kavanagh, director of The Pew Charitable Trusts' Southern Ocean campaign. “If countries work together next month, we will double the conservation areas of the ocean, and protect the world's most pristine seas.”

This could be the decision of the decade for our oceans.-Andrea Kavanagh

The international Commission for the Conservation of Antarctic Marine Living Resources will meet July 11-16 in Bremerhaven, Germany, to consider whether to protect the Ross Sea (proposed by the United States and New Zealand) and East Antarctic waters (proposed by the European Union, France, and Australia) or leave them open to large-scale fishing. The commission oversees the conservation and sustainable use of marine life in the Southern Ocean. In 2012, it could not reach consensus on the proposals and took the extraordinary step of calling this summer's meeting.

“We are not going to wait for a crisis before we take action,” U.S. Secretary of State John Kerry told an audience of diplomats and Ross Sea conservation advocates in Washington this spring.

Pew has supported conservation of the Southern Ocean for two decades. It has partnered with scientists, conservation organizations, and governments to identify the world's marine areas with important environmental and scientific value and to advocate for their protection.