Following years of debate around the need to close loopholes in the 2003 European Union ban on shark finning—the wasteful practice of slicing off a shark's fins and discarding the body at sea—the EU finally adopted a regulation Thursday requiring that all sharks be brought to port with their fins naturally attached.

The decision, welcomed by The Pew Charitable Trusts-coordinated Shark Alliance, is the culmination of a nearly seven-year campaign for stronger shark conservation measures with the support of thousands of concerned EU citizens.

The new EU regulation closes the loophole in the 2003 ban that had allowed fishermen with permits to remove shark fins on board vessels and land them separately from the bodies. Compliance with the finning ban was monitored through a complicated process of measuring and comparing the weights of the fins with the theoretical weight of the whole shark. That left significant room for undetected shark finning.

Prohibiting at-sea removal of the fins, and requiring that sharks be landed with their fins naturally attached, is widely regarded as the most reliable means for implementing a shark finning ban. The new strategy also allows for improved, species-specific landing data, essential for population assessment and fisheries management.

The Shark Alliance coalition, founded in 2006, has grown to more than 130 organisations across Europe and around the world. As well as working directly with decision-makers, the alliance initiated European Shark Week, an annual series of events across Europe to raise awareness about the plight of sharks, engage the public, and motivate politicians to improve shark conservation policies.

In 2009, the Shark Alliance won a major victory when the EU adopted a “Plan of Action” for the conservation and management of sharks. That set the stage for sweeping improvements in shark fishing and protection policies. But the plan remained unfinished business without concrete measures to reduce shark mortality, including science-based, precautionary catch limits and protection for endangered species. While the Shark Alliance made good progress in advocating for these measures, the top priority remained closing loopholes in the EU shark finning ban.

In November 2011, after consulting on options for change and receiving overwhelming support for action, the Commission proposed closing the loopholes in the EU shark finning ban and amending the regulation to require that all sharks be landed with their fins naturally attached. To enter into force, the full proposal had to be agreed to by the Council of EU Fisheries Ministers and the Parliament.

The Council of Fisheries Ministers gave its support in March 2012, with only Spain and Portugal opposing the changes. Deliberations in the European Parliament were lengthy and at times confused, with several MEPs fighting hard to maintain the loopholes. But in November 2012, the EU Parliament voted overwhelmingly in favour of requiring that fins be left naturally attached to all sharks brought to port.

With Thursday's decision, the Council of Ministers formally adopted the legislative text approved by the Parliament, concluding the process to establish a new EU regulation. The regulation will go into effect seven days after its publication in the Official Journal of the European Union.

“We congratulate the EU fisheries ministers, the European Parliament, and the European Commission for achieving an agreement that finally closes all loopholes in the EU finning ban, and thank the numerous groups and individuals who campaigned over many years for such an outcome,” said Sandrine Polti, an expert with the Pew Environment Group's European marine programme and a policy adviser for the Shark Alliance. 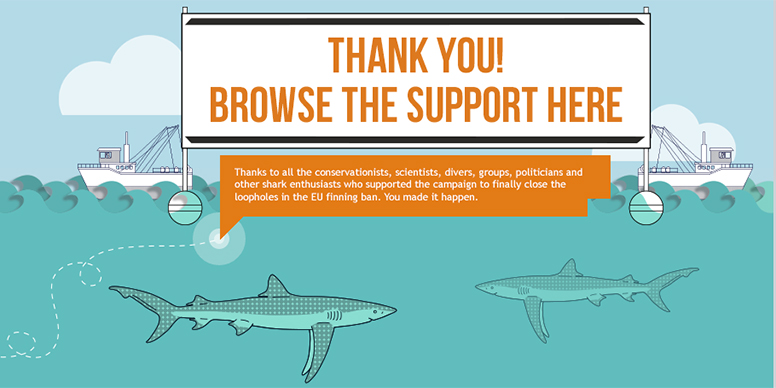