On March 14, 2013, governments voted to provide protection to five species of sharks and two species of manta rays. These are now listed on the CITES Convention’s “Appendix II”, which requires that their international trade in legal and sustainable.

It will change the global shark fin trade in many ways, and provide these threatened species with a chance for survival, and recovery.

The Pew Charitable Trusts advocated for the adoption of three shark proposals and one manta ray proposal to include these species on Appendix II at CoP16: porbeagle, oceanic whitetip, and hammerhead sharks (scalloped, great, and smooth), and manta rays.

CITES - the Convention on International Trade in Endangered Species of Wild Fauna and Flora - is widely recognized as one of the most effective and best-enforced international conservation agreements. It offers protection to more than 30,000 species around the globe and has been instrumental in preventing the extinction of numerous plants and animals. 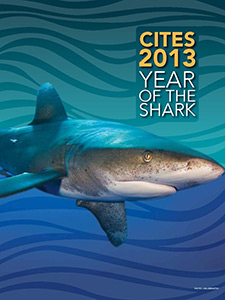 View all of Pew's work for CITES 2013:
English | Español | Français

The international trade of wild animals and plants, including fish and other marine life, is a multi-billion-dollar business. Over-exploitation for international trade, in combination with habitat loss and degradation, climate change, and other pressures, can threaten populations with significant depletion or, worst-case scenario, extinction.

It is crucial that any international trade in plants, animals, and their products be managed in a sustainable and legal way. CITES was established for this purpose. An international treaty among 177 governments, CITES entered into force in 1975.

Countries, referred to as “Parties,” join voluntarily and are legally bound to implement the Convention once they become members.

Although CITES is legally binding on Parties, it does not take the place of national laws, nor does it negate efforts under other treaties and agreements, including regional fisheries management organizations; rather, all are complementary

Learn more about CITES and the sharks and rays Pew is working to protect. (some material available in Español, Français):

What species are to be voted on this year?

How do you recognize parts of shark fins and different types of mantas in trade?