Members of Pew's global shark conservation team have traveled to Bangkok, Thailand for the 2013 meeting of delegates to the Convention on International Trade in Endangered Species of Wild Fauna and Flora, or CITES. In this dispatch, Angelo Villagomez visits Bangkok's Chinatown.

Five species of sharks and two types of manta rays won new safeguards Monday, as delegates to a global wildlife meeting in Bangkok, Thailand voted to limit the trade of species that have been overexploited for decades. Governments will now cast a final vote this Thursday.

I am in Bangkok as well, attending the meeting with a team of international shark and environmental policy experts to advocate for the passage of the shark and manta proposals to list these species on Appendix II under the Convention on International Trade in Endangered Species of Wild Fauna and Flora, or CITES.

That means putting an end to the indiscriminate, unregulated trade in shark fins and manta gill plates, which are widely used in soups and health tonics in Asian countries and communities. Demand for fins and gills are driving these and other species to the edge of total collapse.

More than 2,000 delegates from 150 countries have come to the CITES meeting to vote on proposals affecting 71 species of plants and animals. There are four focused on trade restrictions for sharks and manta rays: the oceanic whitetip, porbeagle, three hammerheads, and both species of manta – all of which passed on Monday, March 11.

Sharks outside the meeting room

While CITES delegates were discussing issues other than sharks, I took a short excursion to Bangkok's Chinatown with three scientists — Dr. Demian Chapman, Debbie Abercrombie, and Guy Stevens. 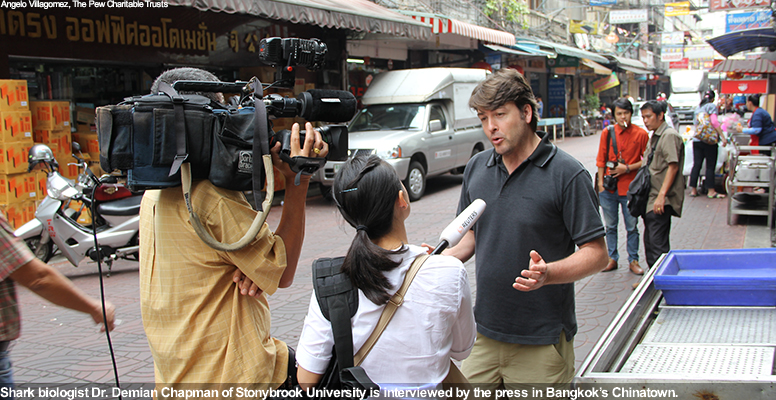 They were invited by Pew to present identification guides they had developed to quickly recognize the fins and gill plates of vulnerable shark and manta ray species in international trade—the same species being considered at CITES for protection. These guides are intended for use by enforcement officials to easily spot fins from protected species in the marketplace.

Our trip to Chinatown had one objective: to see if fins of species being sold there could be easily identified with the guide.

The easiest fins to spot are hammerheads, because they are tall. They also tend to be the most expensive.

Almost immediately, we spotted shark fins in a shop window. They are sold in both restaurants and medicine shops in Bangkok's Chinatown. To underscore the ubiquity of such goods here, we came across a restaurant with plastic fins as door handles. 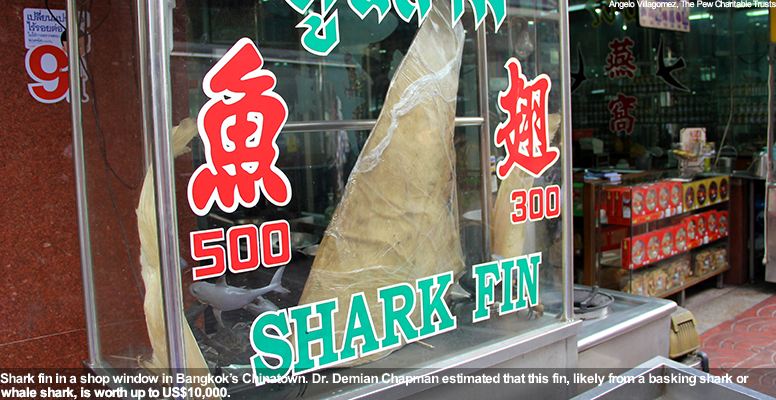 Further down the street, the first page of a restaurant menu listed a large bowl of “Braised Superior Extra-Large Shark Fin in Brown Sauce” for 10,000 baht (US$335). On the other end of the spectrum, you could buy a small bowl of “small fin” soup for 300 baht ($10). 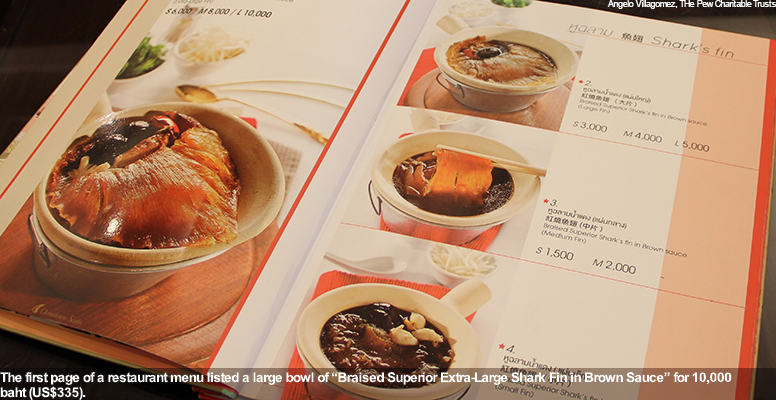 Chapman, a specialist in marine vertebrates, identified a set of hammerhead dorsal and pectoral fins in one display. The 1.38-kilogram (3 pounds) bag of fins was being sold for a whopping 55,000 baht— $1,850. With these prices, it is easy to understand the economic incentive to kill and trade hammerhead sharks—and why their protection by CITES is so important. 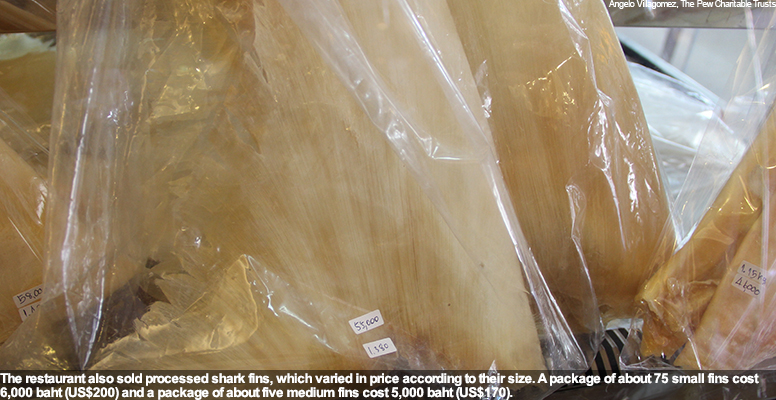 The high demand for sharks and their parts is detailed in a recent study by some of the world's top shark scientists, including Chapman, who estimate that 100 million sharks are killed each year, a rate that exceeds their ability to reproduce. The new Appendix II CITES listing for at least some of these sharks – the most valuable in the fin trade—would restrict future international trade of these species unless it is legal and sustainable—ensuring that these species will not be fished to extinction. Such protection is long overdue.