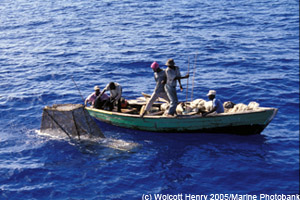 Pressure on the world's fish stocks is at an all-time high, and although most industrial fishing operations act within the law, some take to the seas fully intending to steal fish. But how is illegal fishing defined? Learn more with our answers to some frequently asked questions.

What is illegal, unreported and unregulated fishing?

Most of the world's fish is caught in the national waters of coastal States. Illegal fishing in such areas can range from a licensed vessel fishing more than it's allowed catch to a vessel coming into the zone with no fishing license at all, or even a vessel crew not reporting or under-reporting their catch - even if the vessel is licensed to catch that species.

A lot of unregulated fishing occurs on the high seas. The high seas are international waters beyond the exclusive economic zone, which extends 200 nautical miles from the shoreline, of a coastal state. Patchy regulation, little enforcement and the vast expanse of the ocean – the high seas cover almost 45 percent of our planet – combine to allow rampant illegal and unregulated fishing in those areas.

Even when unregulated fishing on the high seas does not break any national law, it can have a significant harmful impact on marine life in the world's oceans. So, the international community needs to develop and implement policy solutions that both forbid and eradicate these activities.

Is all IUU fishing a crime?

No. While many IUU fishing activities are crimes – for example, fishing without a license or in a prohibited area – others are not (such as the unregulated high-seas fishing discussed above). But other criminal activities are often associated with unregulated activity. These include the forging of catch or import/export documents and ships' logs so that catch can be sold in key markets, and particularly in Europe and North America. Also, a recent United Nations report on transnational crime clearly states that the lack of regulation of fishing vessels allows those vessels to be used in other crimes, such as illegal immigration, human trafficking, drug trafficking and even modern slavery.

What are the impacts of illegal fishing?

Illegal fishing adversely impacts legitimate commercial fishers as well as fish populations. Illegal fishers avoid overhead costs, such as licenses. They fish without the constraints accepted by legal fishers, often falsify documentation and effectively 'launder' their ill-gotten catch. Illegal fishers' actions constitute a clear case of unfair competition since they operate without the costs of doing business legally or the strictures of following established policies and laws.

Also, because illegal fishers do not report catch, their fishing activities affect the accuracy of official fish catch and stock estimates. This adversely impacts how fisheries are managed because regulatory bodies use reported catches and stock estimates to set catch limits and otherwise manage fish populations. Thus, because the real volume of fish caught is unknown, it is very difficult to effectively manage fisheries where illegal fishing is taking place.

How much of a problem is IUU fishing?

It is difficult to measure the volume of IUU fishing taking place across the world's oceans, but experts estimate that illegal and unreported fishing costs the global economy up to $23 billion annually, which represents around 20 percent of the global seafood catch.[i] In developing countries IUU fishing often impacts smaller-scale fishers by stealing fish from near-shore waters or undermining the ecosystem on which the fish depend.

Why should you care about illegal fishing?

You should care about illegal fishing because it threatens the health and therefore the availability of wild-caught fish, a basic source of protein for almost 3 billion people around the world. It also impacts the whole ocean ecosystem by removing key species and by using destructive, forbidden practices. It often targets, or takes as bycatch, threatened species such as sharks, seabirds, or sea turtles.

Illegal fishing likely impacts you in some way with its wide-ranging economic and social costs. It diverts revenue from legitimate, often developing, economies, diminishes a food source for dependent coastal societies, and threatens the sustainability of fish stocks.

What are the causes of illegal fishing?

Illegal fishing is an economic crime driven by a growing world demand for fish and other seafood, and the globalization of the market. Some fishers skirt the law in pursuit of higher catch, taking advantage of patchy regulation of the commercial fishing industry and poor enforcement regimes at sea.

Illegal fishing historically has been a low-risk, high-return activity. That is, the chances of being caught are relatively low as are the costs of fines and prosecution, particularly when compared to the huge profits that can be made by selling the fish. The risks are worth taking because the rewards are huge and the chances of being caught, small.

If fish is certified "sustainable" does that mean it was caught legally?

Not necessarily. A significant proportion of illegal catch is mixed with legal catch – often at sea, on huge processing vessels – making it virtually impossible to tell one from the other. Certified seafood often requires a "chain of custody" system to prevent non-certified or IUU product from entering the system. Several organizations are working to improve the traceability of seafood. But achieving full traceability of all seafood will take many years.

Is illegal fishing the same as overfishing?

No. Overfishing occurs in domestic and high-seas fisheries where politicians, managers or the industry fail to set, implement, or enforce appropriate catch levels. Some Illegal fishing includes fishing that takes place over and above established catch limits.

Where is IUU fishing occurring?

IUU fishing occurs worldwide, both within countries' exclusive economic zones and on the high seas. Subsidies to vessel owners and the fishing industry in developed countries and a lack of political will to reduce the size of domestic fishing fleets have led to substantial excess capacity (too many boats catching too few fish, or vessels that are so large and powerful that their ability to catch fish outpaces the capacity of the fish to replenish their stocks). Oftentimes, as coastal areas become overfished because of this overcapacity, these vessels move to the high seas and into the waters of third countries – most of which are developing countries. There are "IUU hot spots" but these shift depending on the availability of fish stocks and the nature (or lack) of local and regional policies and enforcement measures. Vessel owners who want to engage in IUU fishing will exploit whatever circumstances they can, and they can move their vessels around the oceans quickly in that quest.

Who are the major IUU offenders?

Experts who follow IUU fishing believe that certain individuals and companies have had an ongoing involvement in IUU activity. These people and corporations can be found in various parts of the world based on the "protection" certain jurisdictions provide to vessel owners. But there are many other offenders at the margins who are far less visible. It is often difficult to trace the ownership of the vessels involved in IUU fishing due to the ease with which owners can establish shell entities that, on paper, "own" a vessel but lack physical offices or identifiable individuals in control. In many high-profile IUU arrests it has not been possible to trace the real (or ‘beneficial') owners of the vessel.

Who is policing IUU? 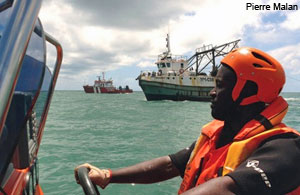 No single body is responsible for setting and enforcing fisheries management policies. The key players are:

Flag States: The country to which a vessel is registered – or flagged – is responsible for monitoring the activity of its vessels wherever they are on the globe. In practice, this is extraordinarily difficult to do. Some flag States are renowned for the ease with which owners can register vessels and the lax State monitoring of those ships. Flags from such States are known as “flags of convenience.” Other States are better but still face the challenge of lots of vessels fishing vast areas of the ocean under a wide range of regional policies. Some flag States refuse to join Regional Fisheries Management Organizations (RFMOs); thus vessels registered to those States can fish the high seas without regard to RFMO policies.

Coastal States: Each country with ocean coastline is responsible for policing its own exclusive economic zone. Countries with ports also have oversight for vessel traffic in their ports and the catch that is offloaded there. Some countries exercise this oversight effectively while others have very poor port State controls. So far, four countries and the European Union have ratified the United Nations FAO Port State Measures Agreement, a newly negotiated international agreement under which port officials can refuse services to vessels suspected of involvement in IUU. Twenty-five countries must ratify the agreement before it will enter into force. Unfortunately, such measures will be fully effective only if all port States adopt and implement them. Unscrupulous operators will always seek out those ports with the least controls.

RFMOs: Regional fisheries management organizations are international bodies made up of member countries that share a practical and/or financial interest in managing fish stocks in a particular region of the ocean (including the high seas). These include coastal States and "distant water fishing nations,” whose fleets travel well beyond their own waters to areas where a fish stock is found. RFMOs cannot, however, enforce policies with vessels that are flagged to countries which are not members of the RFMO.

RFMOs are established by international agreements or treaties and can take different forms. Some focus on regulating fishing for a particular species or group of species (often highly migratory species, such as tuna), and all have responsibility for clearly defined areas of the global ocean. Some have a broader mandate, with responsibility to ensure that the fishery does not negatively affect the wider marine ecosystem and the species within it. RFMOs have no powers of their own to enforce the management arrangements they develop but rely on member governments (parties to the agreement) and cooperating countries to enforce the conservation and management measures that they agree to.

What other crimes are linked to illegal fishing?

Illegal fishing compromises transnational security because many illegal fishers engage in other illicit activity. According to the United Nations Office on Drugs and Crime, illegal fishing operations sometimes involve human rights abuses. Some vessel owners and captains use as crew bonded labor – people working in dangerous conditions for long periods at sea with few rights and little reward. More common crimes associated with Illegal fishing include tax evasion and money laundering. Some Illegal fishing vessels are used for trafficking of drugs, arms and even people.

How can re-flagging a vessel, changing a name or shifting ownership of a vessel aid illegal fishing activity?

Re-flagging, renaming and/or shifting ownership of a vessel allows fishing vessel owners to hide their identities, activity and compliance history from authorities. This works because they are not required to have unique vessel identification numbers, similar to the VIN number on a car. Such an identifier, which would stay with each vessel from construction to scrapping, would give authorities the means to more closely track vessel ownership and activity. A unique vessel identification system exists under the International Maritime Organization, but fishing vessels are exempt from the requirement to use them.

Countries often issue flags or approve ownership transfers without seeking vessel activity details from the prior flag State. Given the variability across States in fisheries management, unscrupulous operators have used those loopholes to set up dummy companies in jurisdictions with weak governance. By flagging their vessels to those jurisdictions they are able to operate (in many cases) with little or no oversight of their fishing activities.

What are the most critical gaps that must be addressed to fight illegal fishing?

What is Pew doing to close the critical gaps to end illegal fishing?