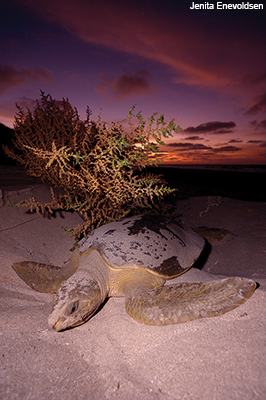 The Western Australian government announced the creation of a second marine park along the world famous Kimberley coastline in northwest Australia's Outback. The Eighty Mile Beach Marine Park is almost 210,000 hectares, and covers one of the world's richest tropical intertidal wetlands.

This announcement comes on the heels of the creation of a marine park for the region's tourism icon, the Horizontal Falls. It is expected that three additional marine parks will be declared. Once that happens, these parks will all link together to become a Great Kimberley Marine Park stretching along almost 500 kilometers (310 miles) of rugged, unspoiled coast.

Eighty Mile Beach Marine Park is approximately 1,750 square kilometers (675 square miles) of beach and, together with adjacent mudflats, forms a recognized “Wetland of International Significance” under the Ramsar Convention, a treaty for international cooperation on wetland conservation and resource management. The Eighty Mile Beach area is a critically important nesting site for flat-back turtles, and its waters are home to other marine life including dolphins, dugong, and whales.

Eighty Mile Beach is also one of the most important migration stop-over areas for shorebirds on the East Asia-Australasia Flyway. It regularly supports millions of birds from 91 different species, including 41 species of shorebirds.

“This area is critical to the survival of many important species including the flat-back turtle and birds such as the Oriental Pratincoles. Protecting places such as Eighty Mile Beach and Horizontal Falls will help to keep the rugged landscapes of the Kimberley intact and remain a healthy part of our natural heritage for future generations.”

The new marine park will protect one quarter of the area's key habitats in “no take” sanctuary zones, while an additional four percent will be recreational or special purpose zones where some activities will be restricted. The marine park will be jointly managed by the Traditional Owners, including the Karajarri, Nyangumarta, and Ngarla people, and the Department of Environment and Conservation.