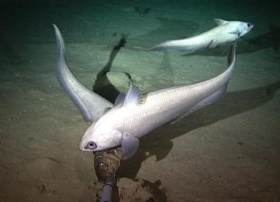 Overnight, we sampled depths between 3000 and 3500 meters along a gradual slope. Both landers worked well, and provided some excellent footage of fish attracted to the bait. The bait, by the way, is jack mackerel, an oily fish which creates a good “odor plume” (basically a strong smell) that is very effective for the fish, but baiting the fish and amphipod traps is not such a popular task on deck!

Back to the landers … the photographs showed a frequent visitor to the bait was a species of macrourid rattail. The fish were at times quite aggressive in chewing into the bait, although the behavior of most fish was reasonably casual, some even ignoring the bait and swimming on past. Rattails are often filmed with their heads down in prey-searching mode near the seafloor, and so it was interesting to see these fish with their heads up almost appearing to sniff the water to follow the odor trail.

The fish trap was eagerly anticipated, although there was initial disappointment as it came aboard with only a single fish. However, the fish was the rattail we had seen in the photographs, and it confirmed the species to be the “cosmopolitan rattail” Coryphaenoides armatus. This is a very common and widespread species throughout the world’s oceans at abyssal depths (hence the name), but it has rarely been recorded from New Zealand waters as most research and commercial fishing occurs shallower than the depth range of these rattails.

Interestingly, the species was first discovered off the west coast of New Zealand’s North Island during deep trawling by HMS Challenger back in 1874, but those specimens were taken back to England and so the fish we caught will be the first specimen of the species from inside the New Zealand exclusive economic zone to be held at the National Fish Collection at The Museum of New Zealand (Te Papa Tongarewa). That made the catch both exciting and scientifically significant.

As we go deeper in coming days, we expect to come across more new and interesting fish. As fish densities are unlikely to be high, we should perhaps expect small catches in the trap….we will let you know how we get on at 4000 meters tomorrow.